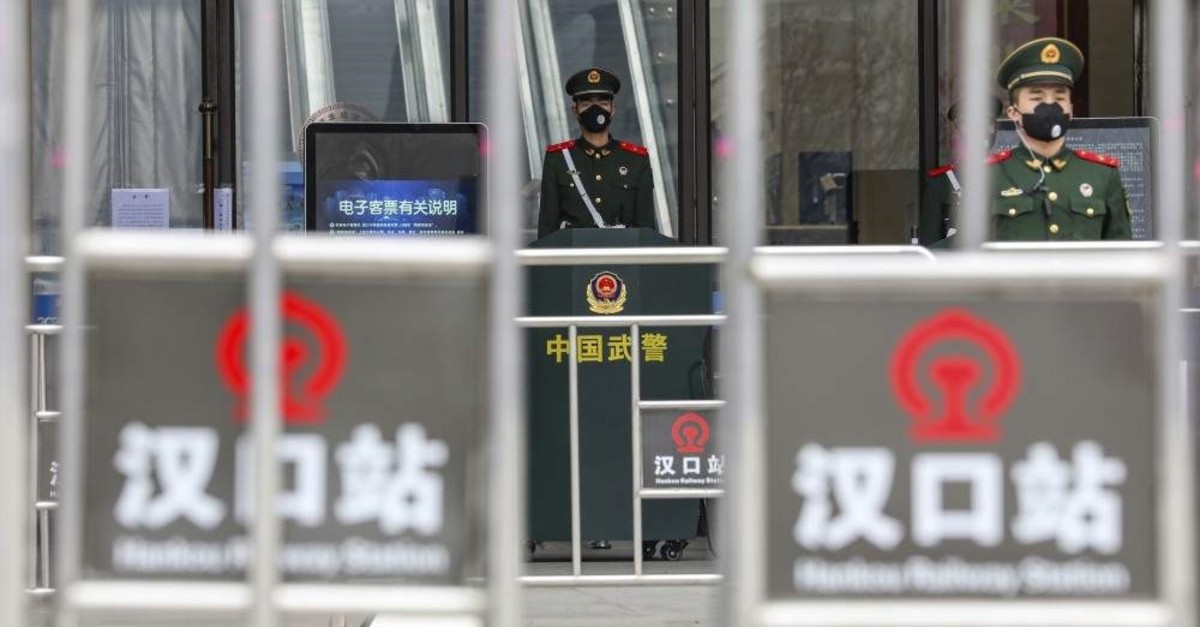 In this Thursday, Jan. 23, 2020, file photo, Chinese paramilitary police stand guard outside the closed Hankou Railway Station in Wuhan in central China's Hubei Province. (Chinatopix via AP)
by Compiled from Wire Services Jan 24, 2020 9:32 am
China broadened its unprecedented, open-ended lockdowns to encompass around 41 million people Friday to try to contain a deadly new virus that has sickened hundreds, though the measures' potential for success is uncertain.
At least 13 cities have been shut down, including Wuhan, Ezhou, Huanggang, Chibi, Qianjiang, Zhijiang, Jingmen and Xiantao, all in central China's Hubei province, where the illness has been concentrated.
Wuhan, which has the majority of cases, also announced Friday that it will build a designated hospital with space for 1,000 beds in the style of a facility that Beijing constructed during the SARS epidemic. The hospital will be erected on a 25,000 square-meter lot and is slated for completion Feb. 3, municipal authorities said.
The lockdown began early Thursday in Wuhan, where normally bustling streets, malls and other public spaces were eerily quiet. Masks were mandatory in public. Train stations, the airport and subways were closed; police checked incoming vehicles but did not close off roads.
The seven other cities under lockdown as of Friday morning are near Wuhan, but authorities were taking precautions around the country. In the capital, Beijing, major public events were canceled indefinitely, including traditional temple fairs that are a staple of Lunar New Year celebrations. The Forbidden City, the palace complex in Beijing, announced it will close indefinitely on Saturday.
To discourage nationwide travel, the government said Friday that all tickets for rail, air, road or water transport could be exchanged for a full refund.
The number of confirmed cases of the new coronavirus rose to 830, the National Health Commission said Friday morning. Twenty-six people have died. Authorities are also examining 1,072 suspected cases.
The first deaths outside Hubei were confirmed. The health commission in Hebei, a northern province bordering Beijing, said an 80-year-old man died after returning from a two-month stay in Wuhan to see relatives. Heilongjiang in the northeast also said one person died in the province, but did not give further details.
The pathogen, known by its technical name 2019 Novel Coronavirus (2019-nCoV), has caused nationwide alarm, with surgical masks selling out at many outlets in Shanghai, Beijing and other cities.
The vast majority of cases have been in and around Wuhan or people with connections the city. Outside the mainland, cases have been confirmed in Hong Kong, Macao, the United States, Japan, Taiwan, South Korea, Thailand, Singapore and Vietnam.
Many countries are screening travelers from China for symptoms of the virus, which can cause fever, coughing, breathing difficulties and pneumonia.
The World Health Organization decided against declaring the outbreak a global emergency for now. The declaration can increase resources to fight a threat but that can also cause trade and travel restrictions and other economic damage, making the decision politically fraught.
The decision “should not be taken as a sign that WHO does not think the situation is serious or that we’re not taking it seriously. Nothing could be further from the truth,” WHO Director General Tedros Adhanom Ghebreyesus said. “WHO is following this outbreak every minute of every day.”
Ghebreyesus hailed China's preventive measures but expressed hope that they would be "short in their duration." Beijing has been praised for its response, in contrast to SARS, when it took months to report the disease and initially denied WHO experts any access.
China also confirmed Friday the second virus death outside the Wuhan epicentre, saying a patient died in Heilongjiang province, 2,000 kilometers (1,200 miles) northeast of Wuhan.
Authorities have said most fatalities were aged between 48 and 89 and already suffered from pre-existing health conditions.
Chinese officials have not said how long the shutdowns of the cities will last. While sweeping measures are typical of China's Communist Party-led government, large-scale quarantines are rare around the world, even in deadly epidemics, because of concerns about infringing on people's liberties. And the effectiveness of such measures is unclear.
Jonathan Ball, a professor of virology at molecular virology at the University of Nottingham in Britain, said the lockdowns appear to be justified scientifically.
“Until there's a better understanding of what the situation is, I think it's not an unreasonable thing to do,” he said. “Anything that limits people's travels during an outbreak would obviously work.”
But Ball cautioned that any such quarantine should be strictly time-limited. He added: “You have to make sure you communicate effectively about why this is being done. Otherwise you will lose the goodwill of the people.”
The coronavirus family includes the common cold as well as viruses that cause more serious illnesses, such as the SARS outbreak that spread from China to more than a dozen countries in 2002-03 and killed about 800 people, and Middle Eastern respiratory syndrome, or MERS, which is thought to have originated from camels.
The first cases in the Wuhan outbreak late last month were connected to a seafood market, and experts suspect transmission began from wild animals sold there. The market is closed for investigation.
Last Update: Jan 24, 2020 12:32 pm
RELATED TOPICS