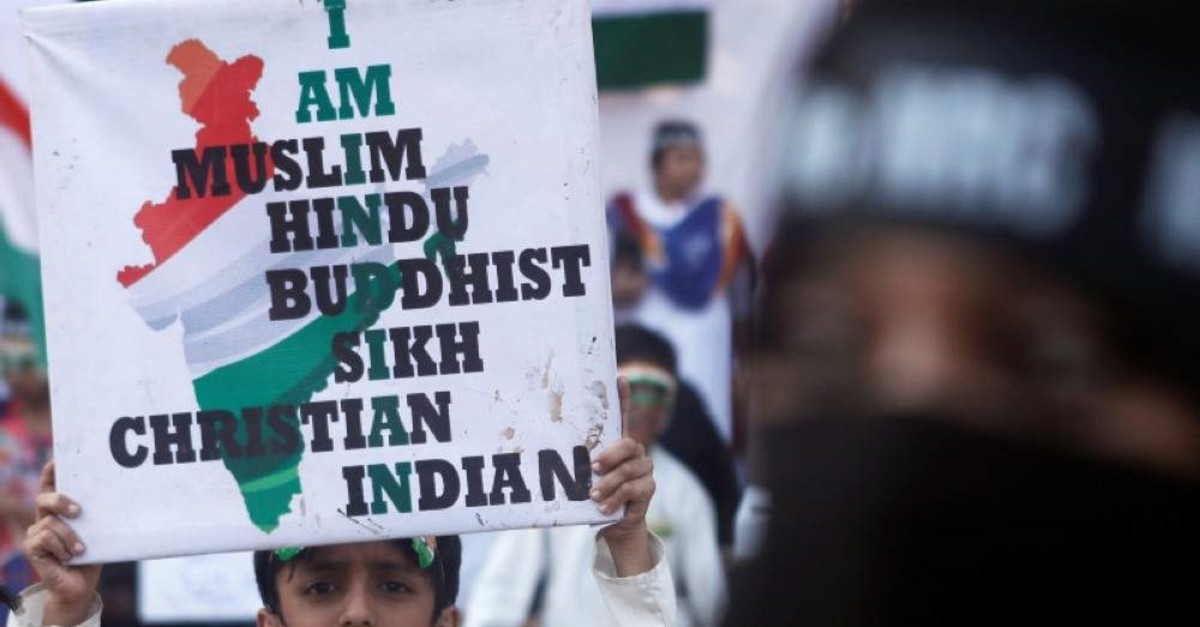 A young demonstrator holds a sign during a protest against a new citizenship law on the outskirts of Mumbai, India, Jan. 26, 2020. (Reuters Photo)
by Anadolu Agency Jan 26, 2020 9:31 pm
Some 300 prominent personalities from India have written an open letter to express their solidarity with student-led demonstrations against a controversial anti-Muslim citizenship law.

"Our vision for this nation demands that we speak up now, in the name of our democracy and the constitution that protects it. We are aware that we have not always lived up to that promise, and many of us have too often remained silent in the face of injustice," the letter said.

The signatories of the letter include filmmakers Mira Nair and Nandita Das and actors Naseeruddin Shah, Ratna Pathak Shah and Jaaved Jafferi.

India has been witnessing massive protests against the Citizenship Amendment Act (CAA), which guarantees citizenship to non-Muslims of three neighboring countries – Pakistan, Afghanistan and Bangladesh. Critics see the new law as unconstitutional and discriminatory against Muslims.

"Contrary to the stated objective of the government, this does not appear to be a benign legislation, only meant to shelter persecuted minorities. The list of exclusions seems to indicate otherwise. Why are minorities from other neighbors like Sri Lanka, China and Myanmar excluded?" they questioned in the letter.

"Why exclude the most persecuted minorities in the region, the Rohingya of Myanmar or the Uighurs of China?" it added.

Activist Shabnam Hashmi, one of the signatories of the letter, told Anadolu Agency that it was written especially for students.

"The ongoing movement in India is student and women-led. Students were attacked and demonized. Even universities were attacked, so we have written this letter for them," she said.

She said that the only motive behind this law is to make secular India a Hindu nation.

Attacks on minorities, especially Muslims, have risen sharply across India in the last few years under the leadership of Prime Minister Narendra Modi.
RELATED TOPICS