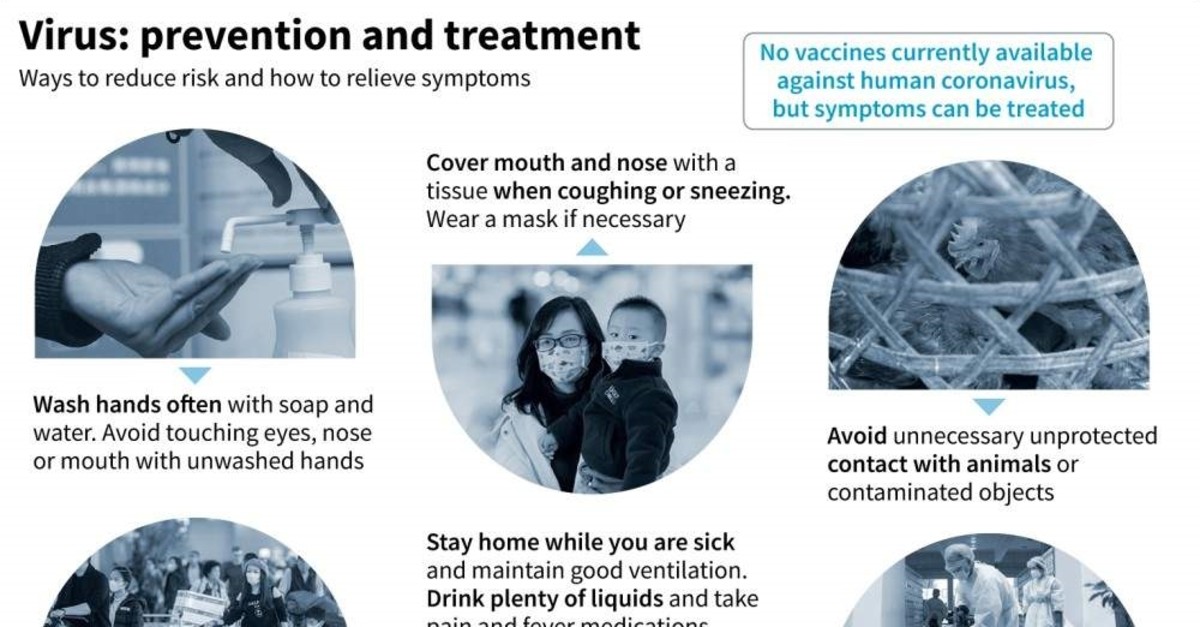 Ways to reduce risk of virus infection and how to relieve symptoms - AFP / AFP
by Daily Sabah with Agencies Jan 27, 2020 3:51 pm

Despite China's massive lockdown, the virulence of the new coronavirus contagion has caused global fear and panic as the confirmed cases worldwide increase, with the death toll spiking to at least 81

A new viral illness being watched with a wary eye around the globe continues to spread with people in more than 13 countries, mostly in Asia, diagnosed with the virus despite China’s massive quarantines and travel lockdowns. The toll from China's viral epidemic spiked on Monday to 81 dead with hundreds of new infections.

Cases have been reported far afield as the rapidly spreading virus has reached North America, Europe and Australia with various countries in Asia also detecting cases. Those infected had previously been in China. The virus spread to Europe with three cases confirmed in France. There are three known cases of the coronavirus in France, the first European country to be affected by the outbreak. One person is sick in Bordeaux, and another is ill in Paris. A third person, a close relative of one of the other two, has also been confirmed to have the virus. All three had recently traveled to China and have been placed in isolation. The U.S. has confirmed five cases of the virus in patients in the states of California, Arizona, Illinois and Washington.

Australia confirmed on Monday its fifth case of a new coronavirus, with health officials saying the case involved a 21-year-old woman who was on the last flight out of the Chinese city of Wuhan to Sydney before China imposed a travel ban. Australia's first four cases were confirmed on Saturday, with one in Melbourne and three in Sydney, with health officials saying they were expecting more given the volume of travel between Australia and China. Cambodia also confirmed the country's first case of the new coronavirus. A 60-year-old Chinese man arrived in the coastal city of Sihanoukville on Jan. 23 from the Chinese city of Wuhan. The man developed symptoms on Jan. 25 and tested positive on Monday.

The new additions to China's death toll came entirely from the epicenter province of Hubei, which on Monday reported 24 new fatalities. Most fatalities and overall cases have been in Hubei, and the government says the deaths have largely been elderly or people already weakened by pre-existing health conditions. But China's National Health Commission said Monday that in addition to 2,744 confirmed infections nationwide, an increase of 769, there were nearly 6,000 suspected cases and more than 30,000 people under medical observation. However, a senior public health expert in Hong Kong said Monday that the real number of people affected by the new coronavirus is higher than what the Chinese authorities say, likely close to 25,000, after evidence emerged suggesting people may be infectious even when they are not showing symptoms.

The capital city, Beijing also reported later in the day the first coronavirus death in the metropolis.
China has also revealed that the virus can spread before any symptoms show, sparking global fear and panic. China's health minister said the country was entering a “crucial stage" as “it seems like the ability of the virus to spread is getting stronger." Ma Xiaowei declined to estimate how long it would take to bring the situation under control but said travel restrictions and other strict measures should bring results “at the lowest cost and fastest speed.” President Xi Jinping has called the outbreak a grave situation and said the government was stepping up efforts to restrict travel and public gatherings while rushing medical staff and supplies to the city at the center of the crisis, Wuhan.

In the heart of the outbreak where 11 million residents are already on lockdown, Wuhan banned most vehicle use, including private cars, in downtown areas starting Sunday. The city will assign 6,000 taxis to neighborhoods to help people get around if they need to. China cut off trains, planes and other links to the city on Jan. 22 and has steadily expanded the lockdown to 16 surrounding cities with a combined population of more than 50 million – greater than that of New York, London, Paris and Moscow combined.

More facts on the new coronavirus

*The new coronavirus, called 2019-nCoV, can spread before symptoms present, Chinese health authorities said, adding that its incubation period can range from one to 14 days.

* The current outbreak was spreading "relatively fast" and "now entering a more severe and complicated period," National Health Commission Minister Ma Xiaowei said, adding that authorities had limited knowledge of the virus and were unclear about the risks posed by its mutations.

* Last Thursday, the World Health Organization (WHO) called the outbreak an emergency for China but stopped short of designating it a global emergency.

* Like the viruses that cause SARS and Middle East Respiratory Syndrome (MERS), the new one is an RNA virus, with RNA as its genetic material, rather than DNA. That means the virus blends with its host's DNA and can mutate rapidly.

*The virus is believed to have originated late last year in a food market in Wuhan that was illegally selling wildlife. Chinese researchers believe it may have been transmitted to humans from snakes, which in turn may have got it from bats. Both animals were known to have been sold at the market.

* The WHO was alerted to several cases of pneumonia in Wuhan City on Dec. 31 and Jan. 7. Chinese authorities confirmed they had identified a new virus.