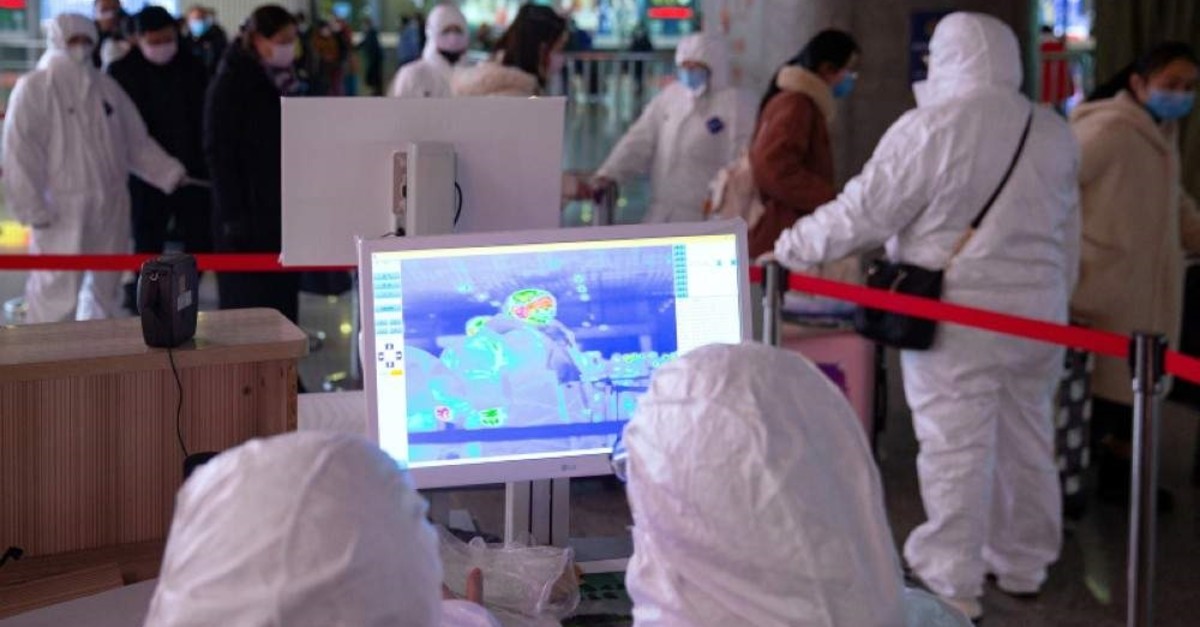 Workers in protective suits monitor a screen showing the thermal scan to check temperatures of passengers arriving at the Nanjing Railway Station, following the outbreak of a new coronavirus, in Nanjing, China Jan. 27, 2020. (Reuters Photo)
by Daily Sabah with Agencies Jan 28, 2020 8:59 am

Not only people traveling to Wuhan are under threat of new coronavirus outbreak but the whole world population as Germany, Japan and Taiwan each reported the first cases of human-to-human transmission

As the number of confirmed coronavirus cases climbed into the thousands, Japan, Germany and Taiwan reported that their first cases were not directly imported from China. Until now, all cases in more than a dozen countries involved people who had been in or around Wuhan, the central Chinese city where the coronavirus first emerged in late December before infecting thousands of people nationwide.

A German man who tested positive for the strain of coronavirus currently sweeping China was infected by a work colleague, officials said on Tuesday, in what is believed to be the first human transmission in Europe. WHO had previously said it was aware of just one case of human-to-human transmission outside of China, in Vietnam. Other confirmed cases in Europe of the viral outbreak have so far involved patients who had recently been to China.

In Japan, a man in his 60s also contracted the virus, according to local reports. The unnamed man had not recently traveled to China but reportedly works as a tour bus driver and came in contact with tourists from Wuhan. In Taiwan, a man in his 50s was infected by his wife who had recently been working in China.

The death toll from the flu-like virus rose to 106 in China with 4,520 cases confirmed, more than double from the 2,744 on Jan. 26, according to China's National Health Commission. It said 976 people were in serious condition as another 7,000 cases were suspected and awaiting confirmation. Confirmed cases outside China have reached at least 37, but no deaths have been reported so far outside the country. The World Health Organization (WHO) last week stopped short of declaring the outbreak a global emergency, which could have prompted a more aggressive international response, such as travel restrictions.

An expert said the sharp rise in the number of infections in a virus outbreak in China suggests there has been significant human-to-human spread of the virus. Malik Peiris, chair in virology at the University of Hong Kong, said Tuesday that the rise might also be explained by vastly expanded efforts to monitor and diagnose cases.

Concern over the highly contagious virus prompts more urgent precautions. As Hong Kong and Russia started to take drastic measures to stop the spread of the disease, the U.S. and other governments prepared to evacuate citizens from the Chinese city at the center of the virus outbreak.

Hong Kong, which has eight reported cases of the SARS-like disease, announced the sealing of six of its 14 border crossings to the mainland starting Thursday. Three Russian regions in the Far East have closed their borders with China until Feb. 7 amid fears over the outbreak there, TASS news agency cited the governor of Khabarovsk region as saying on Tuesday. The border closures affect crossings in the Far East in the Jewish Autonomous Oblast, Khabarovsk and Amur regions, TASS said. Russia and China share a 4,300-kilometer border. Russia has not had any confirmed cases of the new virus but has direct daily flights to several Chinese cities, and officials said last year they expected more than 2 million Chinese tourists to visit in 2019. Singapore, with seven confirmed cases, announced it will ban visitors who have traveled to Hubei as well as those with passports issued in that Chinese province. Mongolia has taken a much more drastic line, closing its entire border with China to pedestrians and cars as well as ordering schools to close. It has no reported cases. The European Union has activated its internal rapid alert system to share information as it monitors the spread of the coronavirus after the first cases in the EU were reported in France and Germany.

The coronavirus family includes the common cold but also more severe illnesses such as SARS and Middle East Respiratory Syndrome. The new virus causes cold- and flu-like symptoms, including a cough and fever, and in more severe cases, shortness of breath and pneumonia. The virus is thought to have spread to people from wild animals sold at a Wuhan market. China on Sunday banned trade in wild animals and urged people to stop eating meat originating from them.