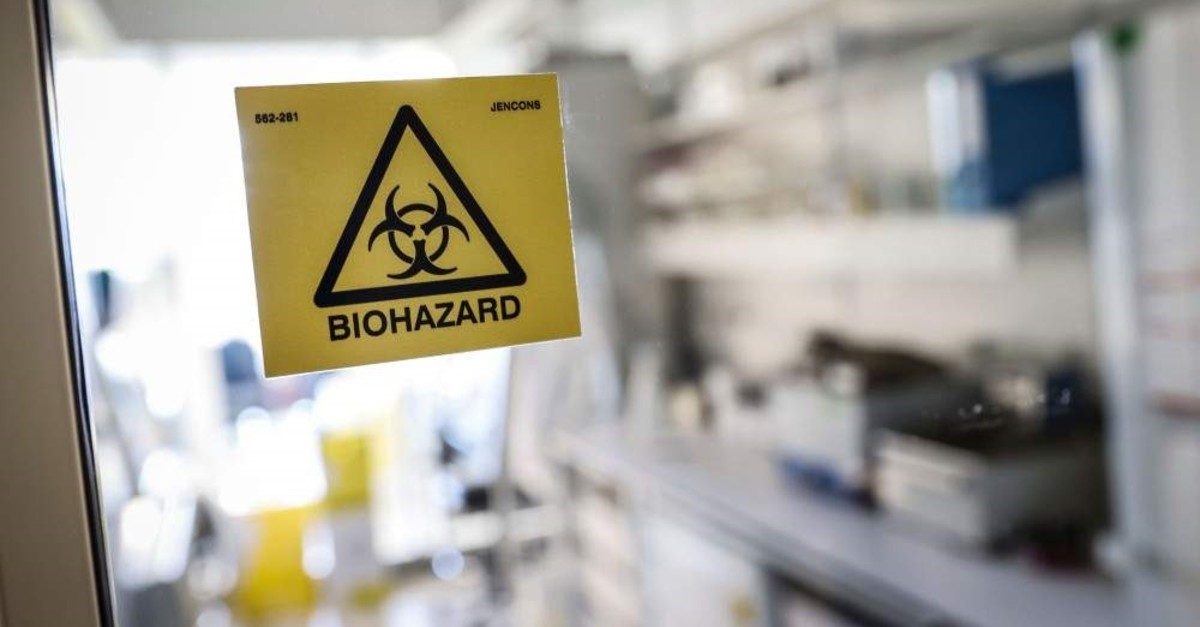 Biohazard sticker seen on the entrance to a room at the laboratory of the National Reference Center (CNR) for respiratory viruses at the Institut Pasteur in Paris, Jan. 28, 2020. (AFP Photo)
by Compiled from Wire Services Jan 29, 2020 8:22 am

Scientists in Australia have successfully replicated the deadly Wuhan coronavirus, in what they said would be a "game changer" in the fight against a deadly epidemic which has stricken thousands.

The Doherty Institute in Melbourne announced Wednesday that it had grown the novel coronavirus in cell culture from a patient sample, the first time the virus has been replicated outside China.

"Having the real virus means we now have the ability to actually validate and verify all test methods, and compare their sensitivities and specificities," virus identification laboratory head Julian Druce said.

"It will be a game changer for diagnosis."

China was quick to sequence the genome of the coronavirus and make it public, allowing scientists around the world to develop diagnostic tools and winning praise for its efforts, in contrast to the SARS outbreak of 2002-2003.

However, China has not shared the virus itself with laboratories worldwide — which the Australian lab will now do via the World Health Organization — though the WHO announced Tuesday that Beijing had agreed to allow a team of international experts into the country to work with their Chinese counterparts.

Doherty Institute deputy director Mike Catton said the new finding meant scientists could now create an antibody test that would allow the coronavirus to be detected in patients who had not displayed any symptoms.

"An antibody test will enable us to retrospectively test suspected patients so we can gather a more accurate picture of how widespread the virus is, and consequently, among other things, the true mortality rate," he said.

"It will also assist in the assessment of effectiveness of trial vaccines."

Governments, universities, and medical corporations worldwide are racing to develop a vaccine against the coronavirus, a process that could take months.

Meanwhile, the Chinese authorities announced that the virus has now killed 132 people and infected more than 6,000 on the mainland and abroad.

China's latest figures cover the previous 24 hours and add 26 to the number of deaths, 25 of which were in the central province of Hubei and its capital, Wuhan, the epicenter of the outbreak. The 5,974 cases on the mainland marked a rise of 1,459 from the previous day, although that rise is a smaller increase than the 1,771 new cases reported on Monday. Dozens of infections of the new type of coronavirus have been confirmed outside mainland China as well.

China has cut off access to Wuhan and 16 other cities in Hubei province to prevent people from leaving and spreading the virus further. The lockdown has trapped more than 50 million people in the most far-reaching disease control measures ever imposed.

The sharp rise in infections recently suggests significant human-to-human spread of the virus, though it could also be explained by expanded monitoring efforts, said Malik Peiris, chair in virology at the University of Hong Kong.

Experts worry the new virus may spread more easily than originally thought, or may have mutated into a form that does so. It is from the coronavirus family, which also can cause the common cold as well as more serious illnesses such as SARS and MERS, which both emerged in the past two decades and are thought to have come from animals.

The new virus causes cold- and flu-like symptoms, including cough and fever, and in more severe cases, shortness of breath and pneumonia. It is thought to have spread to people from wild animals sold at a Wuhan market. China on Sunday temporarily banned trade in wild animals and urged people to stop eating meat from them.