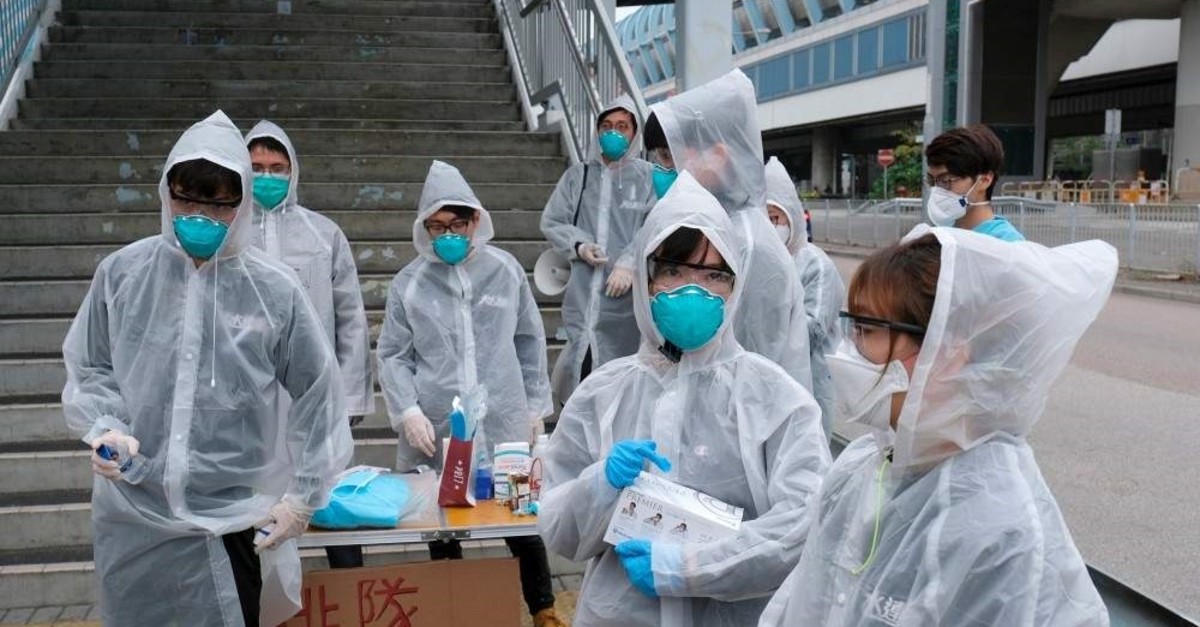 Residents wearing masks and raincoats volunteer to take temperature of passengers following the outbreak of a new coronavirus at a bus stop at Tin Shui Wai, a border town in Hong Kong, China February 4, 2020. REUTERS/Tyrone Siu
by Compiled from Wire Services Feb 04, 2020 11:42 am

China announced that the number of patients infected with the new coronavirus surpassed 20,000, as Hong Kong reported its first death from the disease, authorities said Tuesday.

China's National Health Commission said 64 people had died Monday in the central Hubei province – the epicenter of the outbreak, bringing the countrywide death toll to 425.

Later in the day, Hong Kong authorities reported the first death of a coronavirus patient in the semi-autonomous territory. The victim was a 39-year-old man who had traveled to Hubei in January and had underlying health issues, according to South China Morning Post. This was the second coronavirus death outside of mainland China, after the Philippines reported one death over the weekend, prompting President Rodrigo Duterte to call for a ban against travelers from China. Singapore and the U.S. have also taken similar measures.

The virus has spread to about two dozen countries since first being identified in December, prompting the World Health Organization (WHO) to declare a global emergency. More than 180 cases of the new type of coronavirus have been confirmed beyond mainland China. Belgium has reported its first case of a new virus in a person who was repatriated from Wuhan. The health ministry said Tuesday that the person was in good health and does not show any symptoms of the disease. The individual was among nine Belgians repatriated from Wuhan, China, over the weekend.

Foreign governments continue evacuations from the city of Wuhan, where the outbreak originated. A flight carrying 107 Malaysians evacuated from Wuhan landed at Kuala Lumpur International Airport Tuesday. All the evacuees, as well as crew members and accompanying diplomats, will be quarantined for 14 days.

Chinese medical authorities said Monday that they were expecting the outbreak to reach a peak within 10 to 14 days, longer than initially estimated. China's Politburo Standing Committee, a top ruling body, said the outbreak was "a major test of China's system and capacity for governance," according to Xinhua news agency. The committee said the crisis exposed "shortcomings and deficiencies" in the national emergency response system and called for the strengthening of public health care. The government has especially been criticized for delaying the initial announcement of the novel disease, which experts believe might have led to a wider spread of the virus. Authorities initially tried to silence doctors in Wuhan who were sounding the alarm about the new virus. The Supreme Court last week chastised police over the crackdown.

The coronavirus broke out at a seafood market in Wuhan that reportedly sold exotic animals for consumption, similar to the outbreak of SARS. Severe acute respiratory syndrome, a disease that infected 8,000 people and killed 800 globally between 2002 and 2003, and also began in China, was linked to the consumption of civet cats, another exotic meat. The coronavirus belongs to the same family of viruses.