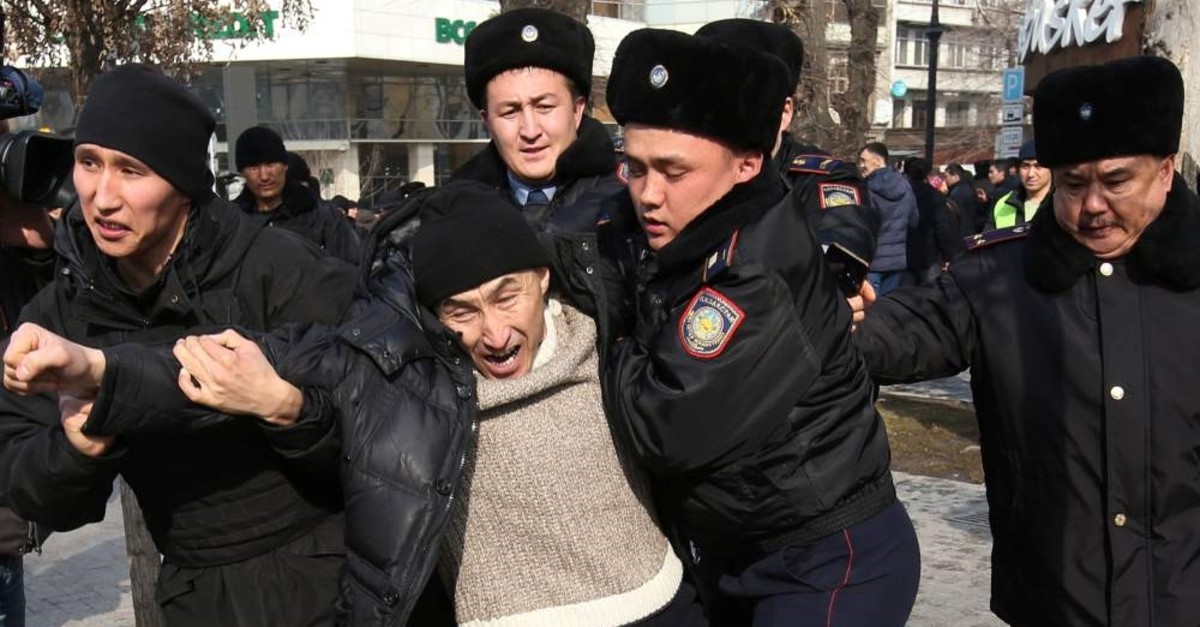 An AFP correspondent saw police detain around 30 activists from the unregistered Democratic Party as they attempted to hold a protest in the largest city Almaty early Saturday. Eyewitnesses said police also detained up to 70 people en route to the city square where the protest was held. Police later detained scores more as they arrived for a separate rally called by the banned Democratic Choice of Kazakhstan movement.

Wheelchair user Erik Jumabayev was among the movement's supporters detained by riot police, who scooped him into an ambulance that then drove away. Authoritarian Kazakhstan has long faced criticism from local and international rights groups for its restrictive laws regulating demonstrations.

Kazakh President Kassym-Jomart Tokayev pledged to reform laws governing freedom of assembly shortly after succeeding long-ruling Nursultan Nazarbayev as president last year. However, there is little sign of any change on the ground, with dissent still crushed in a systematic fashion.

Police have also stepped up detentions of protesters on the eve of demonstrations. Prominent Democratic Party activist and filmmaker Zhanbolat Mamay was one of dozens of activists who were detained ahead of Saturday's demonstrations. Mamay was arrested on Friday night and sentenced to three days' detention for calling for the unsanctioned rally.

The protesters shouted "Freedom to Mamay!" at the Democratic Party's demonstration on Saturday and Mamay's pregnant wife, journalist Inga Imanbay, was among the activists detained. She was later released.

Mamay told AFP by telephone Friday that "at least 10" members of his group had received sentences of up to five days in detention earlier this week -- a measure he said was intended to prevent the Democratic Party holding a conference.

The Democratic Party is a new group created last year in a country where there is no established political opposition. Mamay said the group plans to register as a party, but complained that its activists across the country are already experiencing surveillance and other forms of pressure from authorities.

Authorities have launched regular crackdowns on the Democratic Choice of Kazakhstan movement, led from abroad by former energy minister and banker Mukhtar Ablyazov. Ablyazov in 2017 announced the group's intention to topple the Kazakh regime.

A Kazakh court banned the group as extremist in 2018 and the country's state prosecutor on Friday warned people not to participate in Saturday's protest. Ablyazov – a long-time opponent of Kazakhstan's regime who fled the country in 2009 -- has said the extremism ban is simply a pretext to stop the group's activities.

Now based in France, he thanked the state prosecutor for giving the group "an advertisement" ahead of Saturday's attempted demonstration. Kazakhstan is in the process of changing its legislation on public assemblies, and a draft of the new law has been released for public discussion.

But civil society groups in the Central Asian state have expressed dissatisfaction with a new draft law, which they argue would introduce additional restrictions. Currently, activists risk arrest if they hold demonstrations without permission from the authorities, which is almost never granted for political demonstrations.

Nazarbayev, 79, who became Kazakhstan's president the year before its formal independence from the Soviet Union in 1991, is still widely viewed as dominating policymaking in the vast republic of 18 million people.