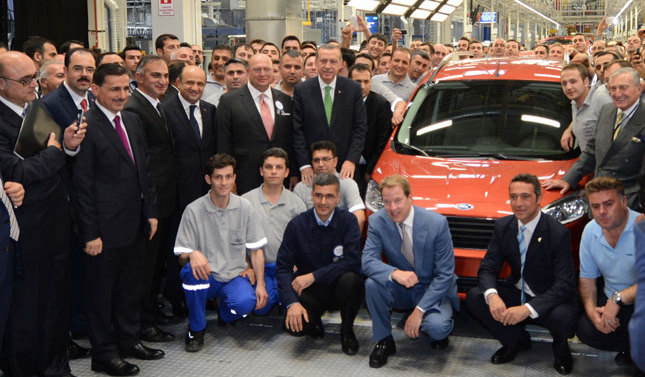 SpeakIng at the opening of the new Ford-Otosan automobile factory in the Kocaeli region, Prime Minister Erdoğan said he still expects Turkey to produce its locally manufactured car. Erdoğan said the government was doing everything in its power to establish the necessary infrastructure for a local car industry

ISTANBUL — After a tough period stemming from domestic incidents like the Gezi Park protests and the Dec. 17 operations that were orchestrated by followers of the shadowy imam Fethullah Gülen to destabilize Turkey's economic and political atmosphere, the Turkish economy is now on the verge of a success story. Especially after the stability-ensuring election results of March 30, the Turkish economy showed its convincing signs of blowing away the cobwebs and reaching back to figures of May 2013.

Not only the domestic incidents but also last year's global financial trends posed obstacles for the Turkish economy, like all emerging countries. However, recent domestic and global economic developments have boosted the economy and caused businessmen and financiers to look to the future with more hope. In particular, breaking developments happened on Thursday like the Turkish Central Bank's interest cuts, Borsa Istanbul's hike up and Ford's new company opening in Turkey have shown that Turkish and international businessmen believe in Turkey's future.

The CBT had radically increased the interest rate by 500 basis points on average in January 2014 as a reaction to global monetary tightening and domestic uncertainties. That decision was perceived as a brake in Turkey's economic acceleration, which caused a huge current account deficit. However, with the recent decline in uncertainties and improvement in risk premium indicators, the CBT lowered its main interest rate by 25 basis points for the first time in a year on Thursday, which Turkish investors and businessmen had been loon awaiting.

After the CBT's interest cut decision, Turkey's stock market Borsa Istanbul (BIST) made a quick and upside rally. The BIST Index increased by more than 2 percent and hit 78,043 points. Experts noted that the number is the highest point in the last eight months. In addition to this, indicative interest rates hit the lowest point of the last four months and decreased to 8.91 points. The advised range by the CBT in June 2013 was between 8 and 12 points. The Turkish business circle was looking forward to these days, as evidenced by their public speeches and press conferences.

Speaking during the opening ceremony Erdoğan hailed Ford's new factory which was built in 16 months and has the capacity to manufacture 110,000 units per year. "It is quite important that this plant is the only one where the Ford's new light commercial vehicle will be produced. Knowing that thousands of people from all over the world will drive the vehicle made in Turkey truly pleases me," Erdoğan said. He also emphasized that Ford Otosan, a company affiliated with Koç Holding and partner of Ford Motor Company, will contribute to Turkey's economy in the field of car manufacturing with not only its production lines but also with engineering works. "I congratulate all who contributed to this investment," he concluded.

After the opening speeches Prime Minister Erdoğan, Economy Minister Nihat Zeybekçi, Science and Technology Minister Fikri Işık and others cut the ribbon. Then, the first Transit Courier, Ford's new light commercial vehicle was launched. Erdoğan sat in the front passenger seat of the vehicle while the William Clay Ford drove the first unit.