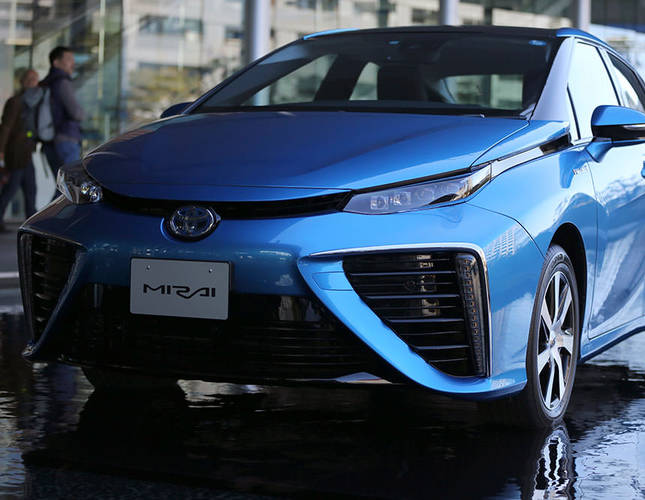 by French Press Agency - AFP
Nov 19, 2014 12:00 am
Toyota announced on Tuesday it would start selling the world's first mass market fuel-cell car in Japan next month and elsewhere in 2015, in what its top executive have called an industry milestone.

The four-door Mirai sedan, powered by hydrogen and emitting nothing but water vapor from its tailpipe, will launch with a price tag of 6.7 million yen ($57,500) in Japan, where Toyota expects to sell 400 units next year.

The car - whose name means "future" in Japanese - will hit the US and some European countries, including the United Kingdom, Germany and Denmark, in 2015, it said.

"We are at a turning point in the automotive industry," Toyota chief executive Akio Toyoda said in a video message on the company's website.

Toyota, the world's biggest automaker, hopes to sell more than 3,000 units of the car by the end of 2017 in the United States, and up to 100 annually in Europe.

The company added that it is aiming to produce "tens of thousands" of the vehicle during the next decade.

Toyota's hybrid gasoline-electric offerings, including the Prius, have sold more than seven million units since their launch in 1997.

But a limited driving range and lack of refueling stations have hampered development of fuel-cell and all-electric cars, which environmentalists say could play a vital role in cutting greenhouse gas emissions and slowing global warming.

The Mirai can travel about 650 kilometers (400 miles) without refueling, some three times further than an electric car, and its tank can be filled in a few minutes like gasoline engine vehicles, Toyota said.

"First, this is an innovative way to solve global environmental and energy problems... and second, this innovation will help usher in a hydrogen-based society."

Fuel-cell cars are seen as the Holy Grail of green cars as they are powered by a chemical reaction of hydrogen and oxygen, which produces nothing more harmful than water.

Japanese automakers, including Toyota's rivals Honda and Nissan, have been leaders in the green car sector. The country's seven major manufacturers reportedly plan to spend a record $24 billion to research the sector this year.

On Monday Honda said it was aiming to launch a new commercial fuel-cell vehicle in Japan by March 2016 and in the United States and Europe at a later date.

Tokyo has pledged to make hydrogen available at a price similar to, or less than, gasoline while boosting the number of hydrogen refueling stations to about 100 next year.