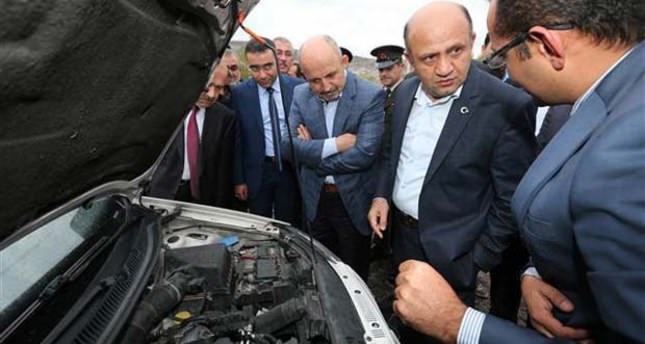 by Daily Sabah Dec 02, 2014 12:00 am
Science, Industry and Technology Minister Fikri Işık said that the ministry is now focusing on local hybrid cars that can travel longer distances, which will be capable of covering an average distance of 100 kilometers at TL 3 ($1.35) on city roads. Speaking on the Kanal 7 show "Başkent Kulisi," Işık announced that such cars will be able to cover longer distances by producing electricity via a small generator that operates with gasoline outside of the city and transferring and storing such electricity to the battery of the hybrid car. With just a few liters of gasoline or diesel required by the generator, these domestic electrical hybrid cars will be capable of traveling non-stop within or outside of cities. Noting that these cars will be able to travel long distances and at the same time be cost-efficient, Işık added that the hybrid cards will be on average 40 percent more economic compared to those with regular internal combustion engines, which are currently the most cost-efficient engines on the market. "These hybrid cards will enable people to save 35 to 40 percent more. In other words, we have focused on a more advantageous model. We will establish a Research and Development Department and the Scientific and Technological Research Council of Turkey (TÜBİTAK) will lead the project, mostly in terms of design and engineering, but various private companies will also cooperate with TÜBİTAK in this project," Işık said.