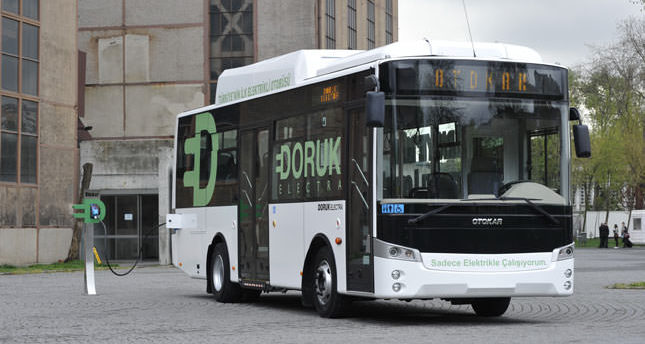 by AA Dec 06, 2014 12:00 am
Doruk Elektra, Turkey's first electric bus which was designed and produced by Otokar, a subsidiary of Koç Group, has begun carrying university students. It was initially tested by carrying staff of the metropolitan municipalities of Istanbul, İzmir, Samsun and Antalya.

Doruk Elektra, which was made available for students of Istanbul University's Avcılar Campus between Dec. 2 and Dec. 4, covered a distance of nearly 140 kilometers and completed the route 60 times, carrying around 3,000 people in 3 days. The electric bus will also be offered to students at Yıldız Technical University's Davutpaşa Campus, and Istanbul Technical University's Ayazağa Campus from Dec. 9 to Dec. 11 and from Dec. 15 to 17 respectively. With a capacity of 25 sitting and 24 standing passengers in addition to a seat for disabled passengers, the bus can be fully charged in 6 to 8 hours.

The electric bus is 5 or 6 times more energy-efficient than a bus running on diesel, with a fuel efficiency of TL 30 ($13) per 100 kilometers, reported Kürşad Gökçe, an engineer at Otokar, adding that Doruk Elektra is a zero-emission vehicle which runs very quietly. Gökce said the electric bus does not need a special charging infrastructure, and can be charged in any place with three-phase industrial electricity. He added that the empty battery of the bus can be fully charged for TL 60.

Gökce also noted that the bus has a range of up to 280 kilometers under normal conditions, adding, "This range can be prolonged by 30 to 40 percent depending on usage, environmental conditions and short-term charging during the day."

Gokce stated Otokar Company dedicates nearly 4.4 percent of its annual turnover to research and development, and they have been working on electric buses since 2010.