First driverless Audi A5 hit the roads in the US 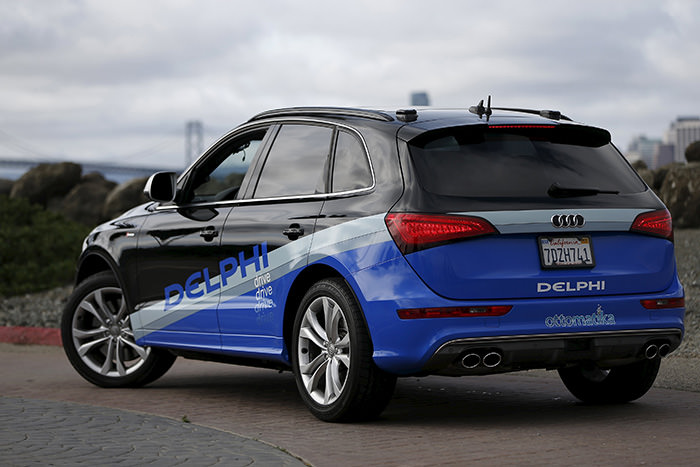 An autonomous car from Delphi drives on Treasure Island in preparation for a cross-country trip from San Francisco to New York City in San Francisco, California March 22, 2015 (Reuters Photo)
by Associated Press Apr 16, 2015 12:00 am
Auto supplier Delphi have enabled an Audi A5 to run driverless for the first time, fitting it with a radar, cameras and laser sensors. It navigated the 3400 miles 15-state journey from San Francisco to New York in nine days, starting on March 22, mostly traveling on highways. The car drove itself 99 percent of the time, Delphi announced on Thursday.

Along the way, the autonomous Audi never drove above the speed limit, even when everyone else did. As a result, other drivers subjected the car — and its human occupants — to "a few hateful gestures," said Jeff Owens, Delphi's chief technology officer.

The person sitting in the car's driver seat intervened once when traffic was weaving around in a construction zone, and again when the car didn't want to move into a busy left lane to avoid police stopped on the right shoulder. The car also got a little skittish when it was next to semitrailer trucks, edging over to avoid them. But for the most part, it easily navigated bridges, traffic circles and open highways, even in heavy rain, Owens said.

"We expected we would be in autonomous mode most of the time, but to be in it close to 99 percent of the time was a pleasant surprise," Owens said Thursday. "The equipment was flawless."

Delphi engineers collected nearly three terabytes of data — equivalent to 30 percent of all of the printed material in the Library of Congress — that they can use to further enhance autonomous-driving systems.

One surprise was the variation in lane markings across states and communities. Some had wide white stripes, others had narrow yellow ones. Some were new, some were faded and some were marked with raised bumps. Delphi will have to further train its cameras to detect all kinds of lane markings, since that's one way autonomous cars keep themselves centered in a lane, Owens said.

Owens said the cameras also got a little blinded in bright sunlight and in rainy weather, but the radar systems always provided backup. The radar, he said, worked well even on metal bridges, which can cause signals to bounce around.

Delphi will use the lessons it learned to improve the systems that will eventually be used in autonomous and even future driverless cars. Earlier this week, Audi AG announced that Delphi will produce a new central computer system that will process the data from various cameras and sensors and tell a car how to respond.

The system will appear in Audis in about two years. Delphi is also supplying Volvo with the radar- and camera-based system that enables automatic braking, lane-departure warning and other safety features on the upcoming XC90.

"This technology has come so far. It's going to make such a difference in the accident statistics," Owens said.