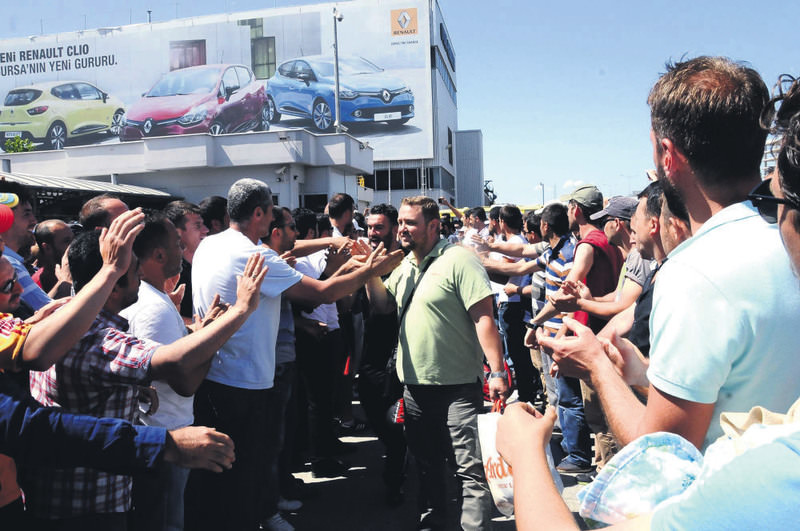 by Daily Sabah with Wires May 26, 2015 12:00 am
While the strike at Oyak Renault, the Turkish arm of the French automaker, continued into its 11th day, no agreement was reached at the end of a six-hour negotiation meeting. The workers, who are demanding higher wages, suspended production on May 15, and another meeting was held on Monday night with workers' representatives, attorneys and the factory management.

The meeting lasted into the early hours of the morning, however, one of the attorneys, Deniz Baykal, announced that no agreement was reached and the negotiations will continue. The worker's representative who attended the meeting, Ekrem Salım, announced the employers are proposing TL 1,000 ($381) in bonuses, TL 480 in bank promotions and a TL 600 bonus at the end of the year. "However, they have not given a certain amount for the increase in hourly wages, but requested one month for the related analysis," Salım said.

Salım said there were no concrete announcements regarding the gradual rise of monthly and hourly wages, and the workers said they are not accepting these three offers and will continue to strike. The workers of Ford Otosan - a joint venture of Turkey's largest industrial conglomerate, Koç Holding, and U.S.-based automotive giant Ford - Turkish car maker Tofaş and automotive supply industry firms Coşkunöz, Mako and Ototrim had also gone on strike, but agreements were reached last week with each company's respective management and the workers resumed their normal shifts.
Last Update: May 26, 2015 11:52 pm
RELATED TOPICS