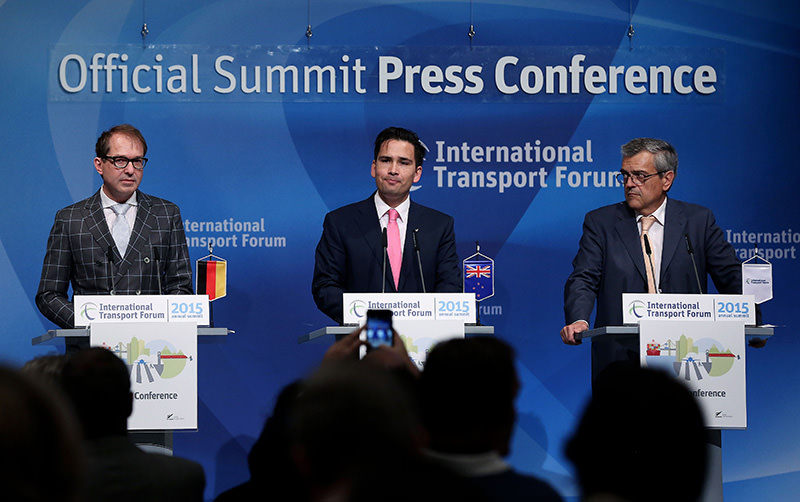 German Transport Minister, New Zealand's Minister of Energy, Resources and Transport, and Secretary General of the International Transport Forum (ITF), attend a press conference during the ITF 2015 on May 27, 2015 in Leipzig, Germany (AFP Photo)
by Sinan Öztürk May 28, 2015 12:00 am

Autonomous vehicles, alternative trade routes, mobility, automation and standardization are the focus as politicians and experts from around the world gathered in Leipzig to discuss the future of the transport sector

U.N. Secretary-General Ban Ki-moon has urged the world's transport ministers to accelerate efforts to combat climate change and "find new green solutions." The 2015 theme of the International Transport Forum's (ITF) annual summit is: "Transport, Trade and Tourism: Mobility for a connected world." It is the largest global event that brings together all key players of the transport sector under one roof in Leipzig, Germany.

Under the presidency of New Zealand, the annual summit is being held for the seventh time with over 3,000 participants, which include transport ministers, renown academics and CEO's of some of the world's largest transport companies.

"I urge all of you to accelerate your efforts," Ban said in a video message released ahead of the annual meeting. "It is time to reshape the world's transport systems for a cleaner, safer and more sustainable future."

Ban called sustainable transport "a common thread" linking the upcoming U.N. summit in September in New York and the Convention on Climate Change (COP21) climate change conference in Paris in December. In New York, world leaders will define a post-2015 development agenda. In Paris, governments will seek to agree on concrete actions to limit the effects of global warming.

At the plenary session of the summit, German Federal Minister of Transport and Infrastructure Alexander Dobrindt stressed the importance of three phenomena in the transport sector – mobility, interconnection and transformation of personal commute options, namely cars, to living space and work activities through automation technologies. Dobrindt arrived at the venue with a self-driven BMW i3, and he later stressed his recent experience with a similar Audi vehicle on a motorway.

ITF Secretary-General Jose Viegas emphasized the importance of the summit as an important stop between the United Nations Climate Summit in 2014 and the 21st Session of the Conference of Parties to the U.N. COP21 framework.

How to address the needs of growing economies, changing production bases and new trade routes, fuel efficiency and reducing carbon emissions are among the key questions that are all being addressed and answered in Leipzig.

Alternative and more efficient trade routes that shorten the duration of goods traveling from one point to another while reducing costs and environmental impact are at the top the agenda.

The use of rail transport for cross-continental trade was stressed at every session. Jean-Pierre Loubinoux, director-general of the International Union of Railways (UIC), said that a mix transportation is necessary and is a growing trend, stressing the incapability of railways to deliver for the "last mile," which again requires trucks or other modes of transport for final delivery. There are initiatives to develop more corridors between Europe and Asia, Loubinoux said, and pointed out that the missing links between rail networks are sometimes 10 kilometers to 40 kilometers. Loubinoux emphasized the importance of standardizing improvement and facilitating rail trade, noting that it has been achieved in road transport through standard consignment bills and other documents.

Uwe Leuschner, Business Development East and Trans-Eurasia vice president of Germany's leading rail freighter Deutsche Bahn (DB) Schenker, emphasized that production bases in China are currently moving inland from the east. Leuschner said that they brought together different players like China, Russia, Kazakhstan and Belarus and it "was not an easy task." Stressing closed markets, different rail gauges, container systems and geographical difficulties, he said currently around 400 westbound and 100 eastbound trains depart in a week despite these difficulties. The delivery time from China to Germany has reduced to 13 days to 15 days, which has become the largest advantage for DB Schenker, along with fewer costs and a smaller carbon footprint.

Leuschner pointed out that rail trade needs hubs, and China and Kazakhstan have recently spent $2 billion to establish a rail hub near their border, which will total $4 billion when complete. He also stressed that they are looking for alternative corridors for the trade on the East-West axis. Speaking to Daily Sabah, Leuschner said that they are looking forward to the normalization of relations with Iran in order to effectively use an alternative corridor from Asia to Europe, which would also include Turkey. "We would like to establish a rail freight company in Turkey if the market would be open to other players," Leuschner said, adding that they already cooperate with Turkish State Railways (TCDD) and other railway companies in the Balkans.

Fuel economy and the future of electric vehicles

As the transport sector accounts for a major part of the world's energy needs and carbon dioxide emissions, reducing the consumption while switching to alternative fuels is another key topic of ITF 2015.

At a panel held by the Global Fuel Economy Initiative (GFEI), it was stressed that the global vehicle fleet will double by 2030 and triple by 2050, triggered mostly by non-Organisation for Econimic Co-operation and Development

(OECD) countries. The GFEI aims to increase the scope of fuel saving and emission reducing policies and actions to at least 100 countries in 2050 while reducing the fuel consumption of vehicles used in these countries by 50 percent.

Alexander Koerner, energy technology policy analyst at the International Energy Agency (IEA), said that their aim is to reduce light vehicle fuel consumption by 50 percent in 2030 and to reduce the fuel consumption of cars again by 50 percent in 2050.
Koerner stressed the heterogeneity of OECD countries in implementing fuel economy policies. Turkey has shown significant improvement and currently stands above Japan and France in fuel economy. Many European countries also proved successful in reducing their fuel consumption, while consumption in the U.S., Canada and Australia, as well as developing countries like Brazil, Indonesia and China stood well below the EU average. Admitting that fuel economy is higher in countries with high fuel prices, Koerner said that reducing the consumption through taxation is one of the IEA's goals.

The future of electric vehicles was also discussed at the panel. Lew Fulton, a researcher from the University of California Davis Institute of Transportation Studies, said that in the first quarter of 2015, only 400,000 electric vehicles were sold, which accounts for only 5 percent out of a total 88 million. The U.S. leads the 2014 sales accounting for 39 percent of electric vehicles sold, with the Nissan Leaf and Tesla being the leading brands. Fulton said that the market for electric vehicles is currently undeveloped and the second-hand prices would be very low. He added that the auto industry aims to increase the battery range from 200 kilometers to 300 kilometers while decreasing costs, along with frequent options for battery charging or enabling the option for battery swapping. Speaking to Daily Sabah, Fulton said that Turkey's aim to become a player in the electric vehicles market would largely be determined through its level of commitment. The process, which would probably require a decade of research, production and sustaining a profitable market, would require a lot of investment and incentives, Fulton said, noting that in time countries will need to replace these incentives as the number of EV's are increasing.