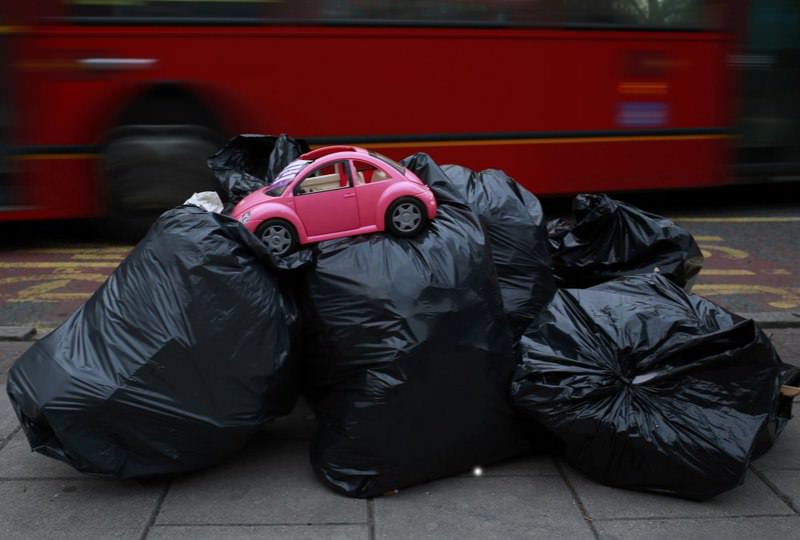 A toy model of a Volkswagen Beetle is seen on top of bags of rubbish ready for collection by waste collectors early in the morning outside a charity shop in London, United Kingdom.
by Daily Sabah with Wires Sep 23, 2015 12:00 am

Volkswagen says 11 million vehicles worldwide are involved in the scandal that has erupted over its rigging of US car emissions tests. It said it was setting aside 6.5 billion euros ($7.3 billion to cover costs of the scandal, according to AP.

The chief executive of Volkswagen America, Michael Horn, used unusually candid language to apologize and admit wrongdoing after the German car giant was caught cheating in US pollution measuring tests, according to AFP.

"Our company was dishonest, with the EPA and the California Air Resources board, and with all of you and -- in my German words -- we have totally screwed up," Horn said at an event in New York late Monday, according to video posted by CNBC.

Horn pledged to "make things right with the government, the public, our customers, our employees and also very important, our dealers." However, Volkswagen denied a media report that said Chief Executive Martin Winterkorn was to be replaced amid an emissions scandal that has rocked the company, according to Reuters.

VW shares were down almost 20 percent yesterday in Frankfurt, after losing 19 percent on Monday.

Last Friday, the U.S. Environmental Protection Agency (EPA) said VW diesel cars had much higher emissions than tests had suggested and that software in several diesel cars could deceive regulators.

"Volkswagen does not tolerate any kind of violation of laws whatsoever," the firm said in its latest statement.

It said provision for the scandal would be made "in the profit and loss statement in the third quarter of the current fiscal year". This would pay for "necessary service measures and other efforts to win back the trust of our customers". It added: "Due to the ongoing investigations, the amounts estimated may be subject to revaluation."

British Transport Secretary Patrick McLoughlin has said the U.K. is "closely monitoring the situation" and has been "pushing for action at a European level for more accurate tests that reflect driving on the road". Earlier, French Finance Minister Michel Sapin said inquiries in Europe had to be conducted "at a European level".

The French carmakers' federation backed Sapin's call, saying such an inquiry would "allow us to confirm that French carmakers respect the procedures for approval in all of the countries where they operate".

For its part, the Italian transport ministry said it would open its own investigation, saying it wanted to know whether such cars were sold in Italy.

However, a European Commission spokeswoman said it was "premature to comment on whether any specific immediate surveillance measures are also necessary in Europe". EU regulators said yesterday they are in contact with Volkswagen AG and U.S. authorities following the car-makers' admission it had rigged emissions tests, and called on member states to rigorously enforce the relevant law, according to Reuters.

Elsewhere, the South Korean government said it would test up to 5,000 Jetta and Golf cars, along with Audi A3s made in 2014 and 2015. Its investigation will be expanded to all German diesel cars if issues are found.

The White House in Washington also reportedly said it was "quite concerned" about VW's conduct.

Volkswagen was ordered to recall half a million cars in the U.S. on Friday. In addition to paying for the recall, VW faces fines that could add up to billions of dollars. There may also be criminal charges for VW executives.

In its latest statement, the firm said it was "working at full speed to clarify irregularities" concerning what it called "a particular software used in diesel engines".

The EPA found the "defeat device", the device that allowed VW cars to emit less during tests than they would while driving normally, in diesel cars including the Audi A3 and the VW Jetta, Beetle, Golf and Passat models.

VW has stopped selling the relevant diesel models in the U.S., where diesel cars account for about a quarter of its sales.

The EPA said that the fine for each vehicle that did not comply with federal clean air rules would be up to $37,500. With 482,000 cars sold since 2008 involved in the allegations, it means the fines could reach $18bn.

That would be a considerable amount, even for the company that recently overtook Toyota to be the world's top-selling vehicle maker in the first six months of the year. Its stock market value is about $75 billion.

VW has ordered an external investigation, although it has not revealed who will be conducting it.
RELATED TOPICS