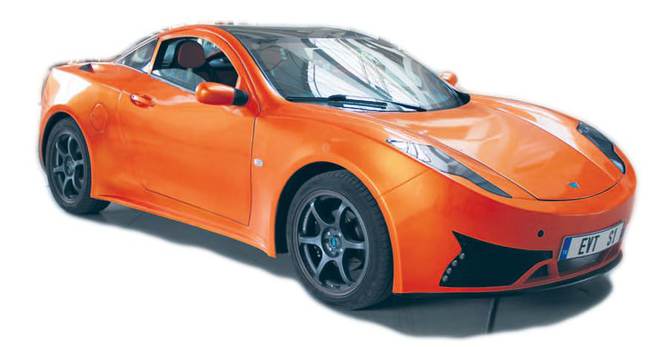 by Daily Sabah Oct 14, 2015 12:00 am
Located in Ankara and ranked among the best universities in the country, Hacettepe University produced Turkey's first entirely domestically produced electric car. The automotive achievement was displayed for the first time for the Sabah Daily's Ankara office.

Named "EVT S1," the vehicle is considered as one of the most suitable models developed in Turkey for mass production. The expected price tag is $50,000.

Developed in the university research and development zone "Teknokent," EVT S1 was designed and produced by a team of Teknokent engineers and Hacettepe's Department of Automotive Engineering students.

The vehicle has already been presented to Turkey's President, Recep Tayyip Erdoğan, and its first public introduction is expected to be overseen by Erdoğan himself.

EVT S1's light and durable body was produced with leaf polymer, carbon fiber and glass fiber, and its energy consumption is quite low due to its special design. The vehicle only consumes 10 kilowatts of energy per hour (kWh) when cruising 100 kilometers at a constant speed of 90 Kilometers per hour. In other words, one-kilometer costs $1.36 with EVT S1, and it can cruise the 450-kilometer distance between Ankara and Istanbul for only TL 18 ($6).

Weighing 1,050 kilograms, EVT S1 can reach a speed of 100 Kilometers per hour in 7.5 seconds with its 141 horsepower engine, and a maximum speed of 180 kilometers per hour to protect its batteries. Its battery has a capacity of 35 kWh and can be charged in 10 hours, or 30 minutes with the accelerated option. This battery allows EVT S1 to travel 300 kilometers with a constant speed of 90 kilometers per hour. It includes an automatic gearbox and 350 liters of baggage area.

Most of EVT S1's parts were produced at Hacettepe laboratories and Ankara's İvedik and Ostim industrial zones.

After obtaining the necessary permission and documents for mass production, 1,000 units of the EVT S1 are expected to be produced in the first batch. The team is also working on developing a luxury and family model of EVT S1, while the second prototype is expected to be ready within a month and a half.
Last Update: Oct 14, 2015 3:36 pm
RELATED TOPICS