Turkish automotive industry starts 2016 with $1.2B in investments 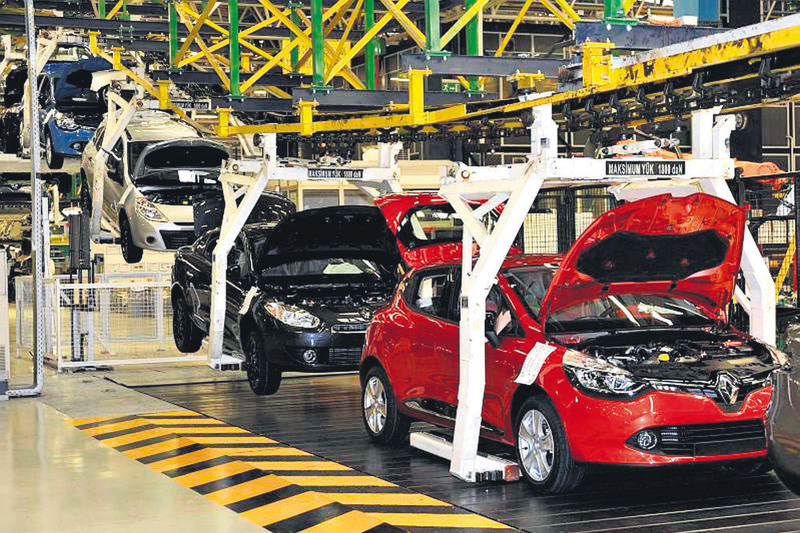 Despite an almost crippling strike in May, the Turkish automotive industry broke records in almost every field and eyes higher goals in 2016 with $1.2 billion of investments at the ready

Having ended 2015 with record highs in production, domestic markets, exports, imports and employment, Turkey's automotive sector is poised to make a great move in 2016 with the production of the domestic car. The world's five automotive giants will launch the new models that they are set to produce in Turkey with nearly $1.2 billion in investments in 2016.

Tofaş, Oyak Renault and Toyota will launch new models in 2016. Meanwhile, Hyundai Assan will introduce the revamped version of the i10 model that it is producing in its İzmit-based facilities at the end of the year, and Honda will produce a new generation of Civic models. Four car models that will be produced will be completely new, while two of them will be the new versions of the existing models. As the number of car models being produced in Turkey rises, the automotive industry will see an upsurge in overall production and exports.

After investing $520 million in the production of sedans, which constitute the first model of the Aegea family, Tofaş – a joint venture of Italian Fiat and Turkey's Koç Holding – is now gearing up to produce hatchback and station wagon versions of the same group in 2016. With these new models, Tofaş will increase the number of daily shifts in its facilities from two to three in the third quarter of 2016, which will urge the company to provide new jobs for an additional 2,000 people. The new models, which will be sold under the name of Fiat Tipo in European markets, will debut at the Geneva International Motor Show in 2016. The car manufacturer aims to export 100,000 hatchback and station wagon models of the Aegea in 2016.

Toyota is preparing to produce mini sport utility vehicles (SUVs) in its facilities in Adapazarı following its Corolla and Verso models. President Recep Tayyip Erdoğan first mentioned this model during his last visit to Japan, and its production in Turkey has been discussed for the last two years. Having received an investment stimulus of $450 million, Toyota will increase its annual production capacity from 170,000 cars to 250,000 cars with the introduction of the SUVs, which will be included in the B crossover segment. The new model will be constructed on the platform of the C-HR concept that was showcased during the Tokyo Motor Show in 2015. Apart from gasoline-powered and diesel-powered ones, the company aims to produce a hybrid-engine version of the new model as well. It is planned that the new model will begin production in 2016. This investment is expected to push Toyota's exports to $4 billion.

Hyundai Assan, which has introduced new cars in Turkey with more than $500 million worth of investments over the past two years, will renew its i10 model by investing nearly $50 million by the end of 2016. It will release the revamped version of the i10 to the market at the end of the year.

Additionally, Honda will start production by renewing Civic sedans with $40 million worth of investments in Turkey in 2016. With this production, the company will fulfill its annual production capacity of 50,000 cars of the İzmit facilities for the first time in many years.

Russia to inject $700 million as auto market shrinks 45 percent
As the automotive market grew by more than 30 percent by the end of November 2015, the Russian automotive market, which has been regressing for three consecutive years, suffered the greatest loss of the year in November – where automobile and light commercial vehicle sales tumbled 43 percent. Turkish daily Hürriyet reported that the market was expected to shrink 40 percent in December 2015 and by 45 percent by the end of 2015 when compared to the end of the previous year.

Automotive sales, which are expected to stand at 1.28 million in 2015, are expected to maintain a downward trend in 2016 and drop to 1.1 million cars. A few years ago, international consulting company PricewaterhouseCoopers estimated that 4 million cars would be sold in Russia by 2020; however, it downgraded this estimate to 2.6 million cars as the market shrank.

Turkish manufacturers, which supplied goods to Russian automotive plants, faced obstacles at Russian customs in December. Some of these obstacles were overcome toward the end of the month, as the local administrations of cities, where those plants are located, and plant representatives came into the fore. However, problems still persist in the supply of spare auto parts.

These losses have urged the Russian government to make a move and take new measures to invigorate the automotive market. As a part of such measures, the government will launch incentives up to $700 million similar to clunkers incentives and offer tax deductions for those who want to replace their old car with new ones. Russian Industry and Trade Minister Denis Manturov said the government will launch a program with $275 million worth of incentives in the first half of 2016, while Deputy Prime Minister Arkady Dvorkovich said the automotive market will shrink merely by 5 percent thanks to $550 million worth of government assistance in the new year, adding that it will be possible to re-achieve sales figures of 2015 if this assistance is increased to $700 million.
RELATED TOPICS