Autonomous braking to be in most cars by 2022 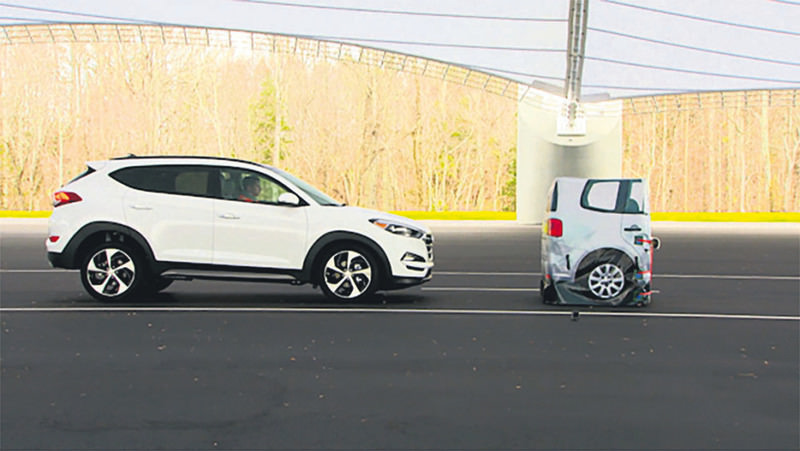 In this frame grab from video provided by the Insurance Institute for Highway Safety, a vehicle closes in on a Strikeable Surrogate Vehicle (SSV) at the IIHS Vehicle Research Center in Ruckersville, Virginia.
by Associated Press Mar 18, 2016 12:00 am

Major automakers have agreed to install automatic emergency braking systems, which means drivers do not need to apply the brakes, in nearly all U.S. vehicles by September 2022 to prevent thousands of crashes per year

Major automakers and the U.S. government have reached an agreement to make automatic emergency braking standard equipment on most cars by 2022. Automakers will phase in the equipment on nearly all models except some with older electronic capabilities and some with manual transmissions.

Automatic emergency braking uses cameras, radar and other sensors to see objects in the way and slow or stop a vehicle if the driver doesn't react. The technology already is available as an option on many models, but automakers are struggling with how to fit it into current product plans that might not be ready for the electronics. Making the feature standard equipment on nearly all cars will speed adoption of the technology.

NHTSA chief Mark Rosekind wouldn't comment, but he indicated that the agreement would cover tractor-trailer rigs as well as cars and other light vehicles.

"Safety should be universal," he said. "For us it's all vehicles on the road."

Cars with automatic braking can cut rear-end crashes by about 40 percent, eliminating about 700,000 police-reported crashes per year based on 2013 data, according to a study released in January by the Insurance Institute for Highway Safety. That number represents 13 percent of all crashes, according to the study. The automatic braking systems are the biggest safety advancement since electronic stability control, said Jake Fisher, auto testing chief for Consumer Reports magazine. The systems bring life-saving features of autonomous cars to the public, he said.

"It's the first time we're seeing a system that will see a problem and react for you," Fisher said. "That's kind of a new frontier, I think, in automotive safety."

In September, 10 automakers committed to the government and a private safety group that they will include automatic emergency braking in all new cars, but the announcement didn't specify a timetable for making the change.

Safety advocates were swift to criticize the effort as a backroom deal that allows automakers to avoid the possibility that the Transportation Department will impose a legal requirement for inclusion of the braking systems in cars and set binding standards for the technology. Transportation Secretary Anthony Foxx has said such agreements will speed up crash-prevention technology instead of having to wait years for it to go through the government's cumbersome rule-making process.

A family car owned by the nation's top auto safety regulator's family has been recalled to fix a faulty Takata air bag, but like millions of others, he's waiting for parts to make the repair. National Highway Traffic Safety Administration chief Mark Rosekind said Wednesday that a car normally driven by his wife was recalled to fix an air bag inflator. When she checked the vehicle identification number in a recall database, she found there were no replacement inflators available. Takata inflators can explode with too much force and spew shrapnel at drivers and passengers. They're responsible for at least 10 deaths worldwide and more than 100 injuries. So far 14 automakers have recalled 24 million U.S. vehicles with Takata inflators in what is now the largest auto recall in the country's history. About 7.1 million inflators have been replaced, and NHTSA has said the recalls almost certainly will grow larger. Rosekind wouldn't identify the type of car, but he said the family is fortunate to have another vehicle for his wife to drive in California, where she lives. The agency has taken over management of the recalls and is sending replacement parts to older vehicles and to those in high-humidity areas along the Gulf Coast. Takata uses the chemical ammonium nitrate to create a small explosion and fill the air bags in a crash. But tests have shown that the chemical can deteriorate over time when exposed to high temperatures and humidity. Rosekind said he's not getting special treatment, though, and the car is going to be fixed at the "appropriate time."