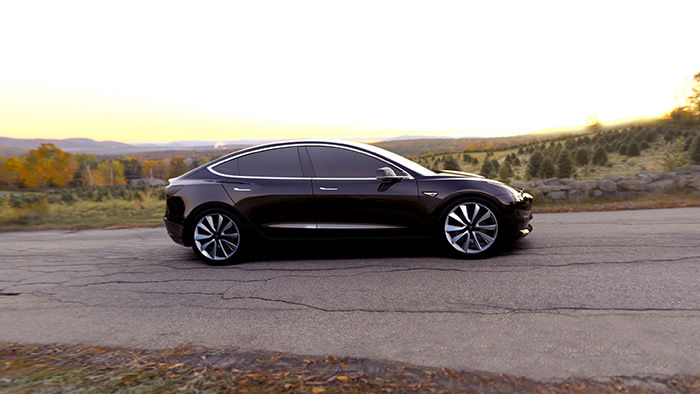 Tesla unveiled on Thursday a new, cheaper model of its electric car aimed at the mass market, taking more than 115,000 orders in 24 hours – nearly three times the number of cars which it produced all of last year.

The company said orders were piling up, even though the new car won't be available until late next year.

"The total number of orders for the Model 3 in the past 24 hours has now passed 115,000," said company founder Elon Musk at a presentation of the new car.

Musk described it as "the final step in the master plan: a mass market, affordable car."

With the Model 3, Tesla aims to show it can appeal to the general public and produce cars en masse. The Model 3 should account for the lion's share of the 500,000 cars that Tesla had set as its annual production goal for 2020. Last year, it turned out 50,000.

The Model 3 is designed to have a range of at least 215 miles (346 kilometers) with a fully charged battery, and be able to comfortably carry five adults.

The car will also be compatible with a fast-charging battery system and Tesla's "Autopilot" self-driving system. Special safety features are available at no extra cost, Musk said without going into detail.

"Even if you buy no options at all, this will be an amazing car," he said.

Some analysts said this moment is as big for Tesla as the unveiling of the iPhone was for Apple.

Before Thursday's presentation, lines formed outside Tesla stores as people waited to place orders for the new car.

Jessica Caldwell, an analyst with the automotive website Edmunds.com, described it as follows: "This has to be a first for the automotive industry: lines of people waiting to place an order for a car that won't be available for over a year. This is the type of buzz that you see with Star Wars movies or new iPhones or even cronuts. And it's not just in Silicon Valley or L.A. This is a phenomenon we're seeing across the country. If there's ever been any evidence that Tesla is primed to make the leap to mainstream car buyers, this is it."
Last Update: Apr 01, 2016 12:10 pm
RELATED TOPICS