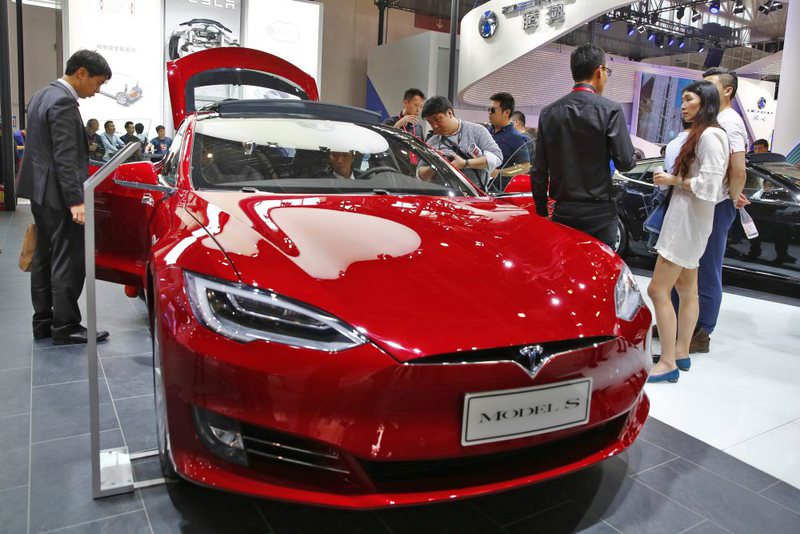 The electric carmaker brushed off a big first-quarter loss and cheered investors with news that it plans to accelerate its production plans. Tesla is pushing ahead with its plan to make 500,000 vehicles per year by 2018

Tesla is speeding the timeline for building half a million cars annually as it steps up production to meet growing demand for its electric vehicles.

Hot demand for a new, more affordable Model 3 led the company to shave two years off its timeline for building a combined total of 500,000 vehicles, combining Model S, Model X, and Model 3, each year and make the new target date 2018.

"Increasing production fivefold over the next two years will be challenging and will likely require some additional capital, but this is our goal and we will be working hard to achieve it," Tesla founder and chief executive Elon Musk said Wednesday in a letter released with a quarterly earnings report.

Musk affirmed the company's plan to deliver 80,000 to 90,000 new vehicles this year, and said it was on track to begin deliveries of its keenly awaited Model 3 late next year, which at around $35,000 will be priced at about half the cost of its Model S.

Tesla received more than 325,000 orders for its Model 3 during the first week it began taking deposits, despite never paying for advertising or endorsements, according to the company.

"This implies about $14 billion in future sales, making the Model 3 introduction the biggest consumer product launch ever," Musk said.

"Since then, reservations have continued to grow to surpass even our expectations."

Musk theorized that the number of cars cranked out by Tesla, powered by batteries made in Gigafactory built in partnership with Panasonic, could ramp to a million by the year 2020.

"We actually believe that Fremont and the Gigafactory could scale to a million," Musk said, referring to the Tesla plant in the Northern California city of Fremont.

"Whether that is wise is another question." Long-term ramping of Tesla production would likely involve building factories on other continents, particularly Europe and Asian, to reduce costs of getting vehicles to customers, according to Musk.

In its quarterly results, Tesla said revenue in the past quarter climbed to $1.6 billion in a 45 percent increase from the same period a year earlier, while the company's net loss narrowed 34 percent to $75 million.

"Our financial performance improved as well," Musk said in the letter.

Tesla shares climbed more than 3 percent to $230 in after-market trades that followed the release of the earnings report, regaining ground lost during the day after word spread that it was losing two key executives.

One of the departing executives was Tesla Vice President of Production Greg Reichow.

After being with Tesla for more than five years and leading its production team for the past three, Reichow plans a leave of absence to "have a well-earned break," a Tesla spokesman said in response to an AFP inquiry.

Reichow will remain at Tesla until someone is found to replace him, according to the company.

"Greg and the team deserve a lot of credit for building an all-new manufacturing organization from the ground up and for making Model S and Model X a reality," Musk said.

In a release statement, Reichow described the Tesla team as talented and committed, and that he strongly believes in the company's "ability to successfully deliver great cars and inspire the world to drive electric."

Tesla offered no comment on reports on the departure of another executive, Josh Ensign, who had been vice president of manufacturing.

Musk has moved his desk to the end of the assembly line and has a sleeping bag handy for overnights in the factory, he said during the call. "Tesla is really hell bent on being the world's best at manufacturing," Musk said.

"What we are trying to do is get as many electric cars on the road as possible."

Model 3 was designed to be easy to produce, as opposed to the Model X, which Musk referred to as perhaps the most difficult car to manufacture.

Among the snafus cited: problems with the vehicle's "falcon wing" doors either not opening or not shutting; difficulties with the car's self-driving mechanism becoming "confused"; "double vision" distortions from the curved windshield; and insufficient heating.

Consumer Reports praised the California company's consumer service, but questioned "whether Tesla can keep up with the service issues" as output increases.

Tesla said the Model X's reliability trends are comparable with those on the Model S sedan, which has improved considerably over the last two years, and that it was working quickly to address any problems.