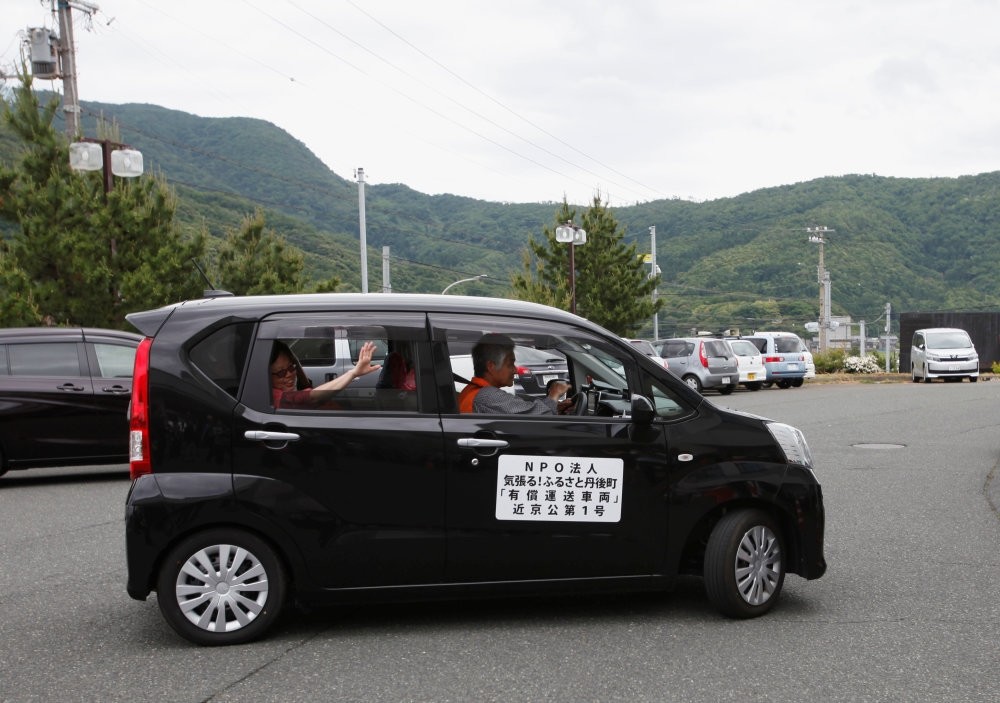 A tourist from Singapore (L), who is the first user of the car sharing service supported by Uber in Kyotango, Japan, waves from the car.
by Jun 14, 2016 12:00 am

Industry analysts say a typical car spends 95 percent of its life at a standstill. Big car manufacturers have joined an investment rush in car and ride-sharing services, lured by the prospect of $10T in profit

Auto giants are racing to invest in car- and ride-sharing services, lured by the prospect of fat profits yet to be tapped from a billion cars on the world's roads. A typical car spends 95 percent of its life at a standstill, industry analysts say, making it a vastly under-utilized, depreciating asset. There may be big money waiting, therefore, for the business that can get the car moving again. That is incentive enough for manufacturers from Toyota to Volkswagen and General Motors to join an investment rush, apparently without fear of ushering in a future in which individual car ownership is no longer king. Thinking of the car business as a service dramatically changes perceptions of its value, Morgan Stanley analyst Laura Lembke told a conference in Munich this past week. New car sales worldwide run at about 80 million a year bringing in $1.5 trillion (1.3 trillion euros), Lembke said. But the total existing stock of cars is closer to 1 billion vehicles. If the average cost of a trip is $1 a mile (0.56 euros per kilometre), she estimated the market value could be as much as $10 trillion.

That estimate helps to explain the valuations placed on apps such as ride-hailing service Uber, valued at $62.5 billion - one-third more than the world's number three auto manufacturer General Motors (GM).

GM this year invested $500 million in Lyft, one of the chief competitors to Uber in the United States. Last month, Toyota announced a strategic partnership with Uber, with an undisclosed investment. Volkswagen ploughed $300 million euros into taxi app Gett on the same day.

"Alongside our pioneering role in the automotive business, we aim to become a world leading mobility provider by 2025," said Volkswagen chief executive Matthias Mueller.

Automakers see an opportunity but it is too early to accurately assess the potential value of such a young industry, said Jeremy Carlson, senior analyst of automotive technology at research group IHS.

Car manufacturers may sell into a fleet of vehicles for drivers to use in these new services, he said. Or they may decide to gain experience and launch competing services.

"Yes, this has the potential and the likelihood to impact the traditional automotive business model at least in some capacity," Carlson conceded.

"But we don't expect the kind of traditional ownership and sales model to disappear anytime soon. We expect it to be the majority until at least 2035 and for all of those years vehicle sales, the traditional model, remains the vast majority of our automotive sales."

Even if the future brings us self-driving vehicles combined with car-hailing apps to offer a service rivaling the convenience of private ownership, the market for car manufacturers could survive, the analyst said.

"When you have autonomous added to car sharing and ride sharing, those vehicles are running at a higher rate and are making many more trips. The idea is that you will replace those vehicles much faster," Carlson explained.

"There may be an impact on the total vehicle production and sales base, but it's certainly not nearly as drastic as we have seen in other reports."

Paulin Dementhon, founder of Drivy, a French app that lets car owners rent out their vehicles, said the new services were starting to live up to their promise. Manufacturers, now concerned primarily with building and selling vehicles, would have to decide how to adapt to a market of car-related services, he said.
RELATED TOPICS