Toyota gets bullish on plug-in hybrids with new Prius Prime 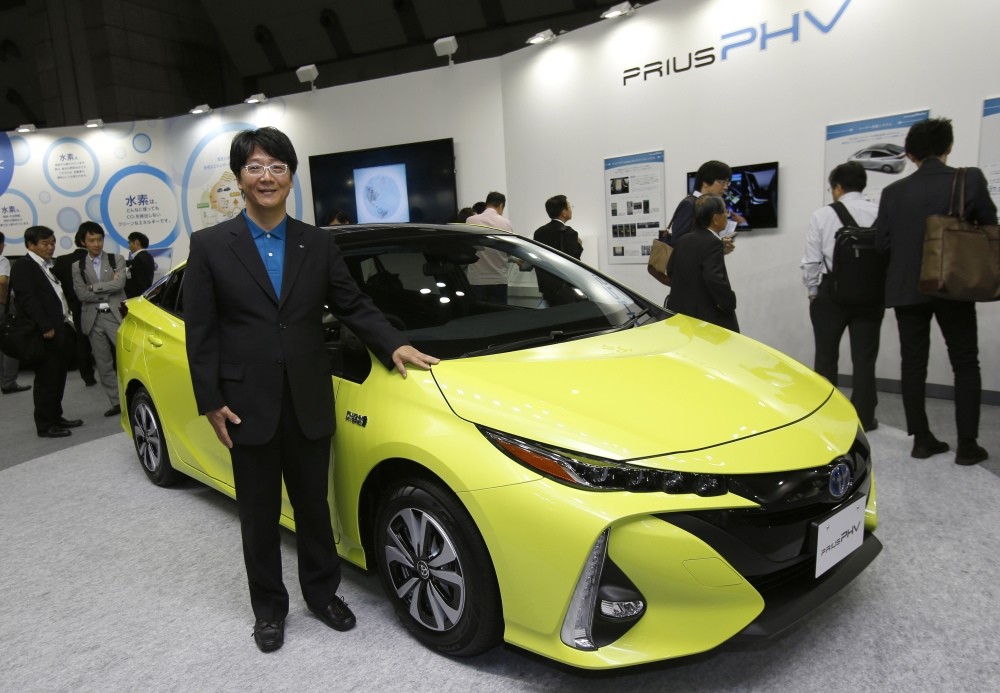 Chief Engineer Kouji Toyoshima poses with a Prius PHV at the Smart Community Japan exhibition in Tokyo.
by Associated Press Jun 16, 2016 12:00 am
A top engineer at Toyota says the Japanese automaker plans to get as bullish as its rivals in pushing plug-in hybrids with the introduction of its new Prius Prime. Toyota Motor Corp. leads the industry in hybrids, which switch between a gas engine and an electric motor. It has sold 9 million hybrid vehicles around the world since the first Prius went on sale in 1997 but only about 75,000 plug-in hybrids, which charge from a regular household plug and switch to operating as hybrids only when their batteries run low. The first Toyota plug-in was launched in 2012, after limited leasing from 2009. It will start selling its remodeled plug-in, called the Prius Prime in the U.S. and Prius PHV in Japan, later this year. The company is promising a whopping mileage equivalent to 120 miles per gallon, calculated including how far the vehicle goes as an electric car, without a drop of gas.

"We were just studying it thoroughly," Chief Engineer Kouji Toyoshima told The Associated Press, when asked whether Toyota had fallen behind on plug-ins. "But what we have developed is at the top level among plug-in hybrids."

The Prius Prime looks similar to a regular Prius. Toyota is aiming for a model it can sell at high volumes, with friendly styling and affordable prices, so as to have the most impact in reducing fossil fuel consumption, Toyoshima said. He said battery costs are the main obstacle for reducing prices. Toyota has not yet announced pricing for the Prius Prime.

The vehicle's solar panel provides about 10 percent of the average driving range of a Tokyo resident, partly addressing the criticism that while electricity is emissions-free at the car level, power generation relies mostly on fossil fuels. When the Prius Prime is operating as an electric car, the generator for its hybrid feature also works with the motor to increase efficiency, Toyoshima said.

The EV's cruise range is 22 miles (35 kilometers), or long enough for about half of American commuters. That rises to about 80 percent for people who can plug in during work, according to Toyota.
RELATED TOPICS