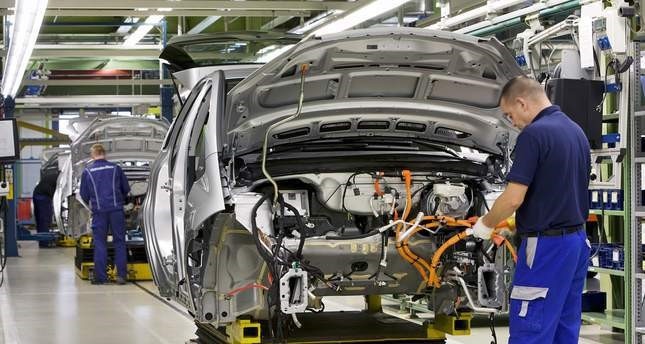 by Daily Sabah Sep 05, 2016 12:00 am
According to the Automotive Industry Exporters' Union (OİB) August report, Turkey's automotive sector scored a record-breaking export total of $1.7 billion last month, a 23-percent increase and the highest export profits in a single month in its history. As the sector that usually lags behind others in the month of August due to the coming holiday season of Qurban Bayram (Feast of Sacrifice), the automotive industry closed August leading other sectors for the first time, while the industry's share among total Turkish exports in August stayed at 15 percent.

The sector's performance in August was most prominent on a country-by-country basis, with the automotive industry exporting $317 million to its biggest market Germany, a 38-percent increase, in a surge that was greatly affected by the 99-percent increase in passenger car exports and the 22-percent increase in the export of by-products.

The automotive sector's second largest export market France brought $191 million in revenue, a 29-percent increase, followed by Italy with an 81-percent increase in that market to $158 million. Spain and Israel were not far behind with a 60-percent increase in exports to those countries. The U.K. and the U.S. markets, on the other hand, decreased by 29 and 26 percent, respectively.

In terms of shares, the sector's largest market, the EU, which currently holds a 77 percent share of Turkey's automotive sector, saw a 29-percent increase, reaching $1.288 billion. On the other hand, exports to alternative markets in Middle Eastern and African countries increased by 15 and 23 percent, respectively.

American countries saw a 17-percent decrease in exports. OİB Chairman Orhan Sabuncu said the Turkish automotive sector's exports reached $15.141 billion from January to August -- a 12-percent increase that Sabuncu says establishes this sector's place as the leader in Turkish exports. "We are getting closer to our year-end target of $23 billion," Sabuncu said.
RELATED TOPICS