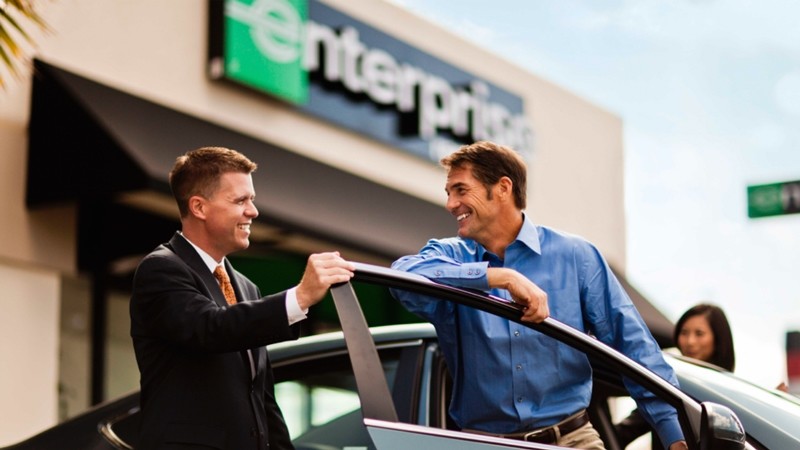 by Merve Aydoğan Oct 15, 2016 12:00 am
The U.S.-based car rental giant Enterprise celebrated its second year anniversary in Turkey on Friday during an event organized by the Gürbaşlar Automotive Group with Istanbul Governor Vasip Şahin as well as a number of CEOs and NGO representatives in Istanbul in attendance.

Speaking to Daily Sabah, Enterprise Turkey's managing partner Özarslan Tangün said their aim for the next three years beginning in 2017 is to triple the amount of investments in Turkey.

The Enterprise event, which was also attended by the U.S. deputy consulate in Istanbul as well as former politician Mehmet Ağar and Çalık Holding Executive Chairman Ahmet Çalık, expressed confidence in the Turkish economy despite the current unsteady economy and politics in the region that deeply affect Turkey.

Continuing on by underlining their belief that Turkey will overcome all obstacles by any means necessary, the executive chairman of the Gürbaşlar Automotive Group Adnan Başdemir stressed that they are to continue their increased investments in Turkey in the upcoming period as well.

The other executive chairman of Gürbaşlar Mustafa Başdemir said Enterprise Turkey operates in 45 airports as well as in more than 50 cities while Adnan Başdemir added they are to continue their investments in Turkey under the philosophy of "to be better and further ahead than yesterday."

The Gürbaşlar Automotive Group not only operates Enterprise Turkey but also provides car rental services in Turkic-countries as well as in Iraq. In that perspective, Enterprise had increased its number of cars from 1,700 in the first year to 7,500 currently as it aims to further enhance its investments to TL 2 billion within a three year period.

Adding on to his remarks by noting that Enterprise Turkey's growth is currently at 45 percent for this year despite regional crises and a decrease in the number of tourists, Tangün said the major obstacle for the sector is the lack of legal infrastructure, adding, "There are some gaps in the legal infrastructure for the sector, which it does not require one to obtain a license to do the business allowing 'under the table' operations."
Last Update: Oct 15, 2016 9:21 am
RELATED TOPICS