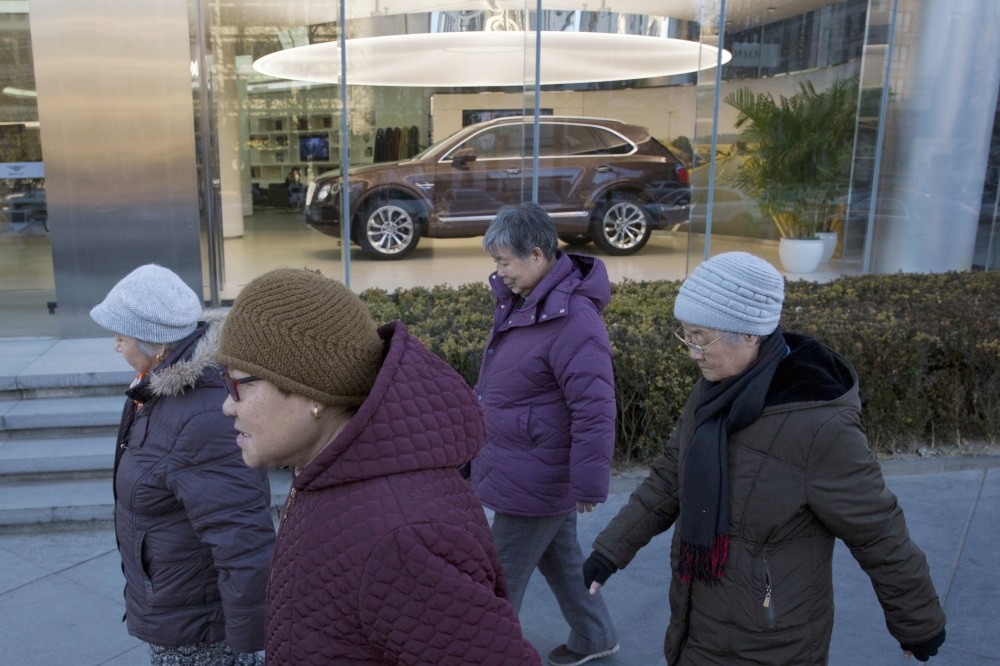 Elderly women enjoy their daily walk outside the Bentley Motors showroom in Beijing.
by Compiled from Wire Services Dec 02, 2016 12:00 am

Chinese buyers of eye-poppingly expensive luxury cars will have to pay extra under Beijing's latest effort to rein in ostentatious spending. The communist government has added a 10 percent import tax, effective Thursday, on "super-luxury vehicles" priced above 1.3 million yuan ($190,000). The Finance Ministry said it is aimed at encouraging "rational consumption" and curbing energy use and emissions. Chinese leaders are trying to nurture domestic consumption to reduce reliance on trade and investment, but worry extravagant spending by the elite is politically dangerous at a time of slowing economic growth.

The government of President Xi Jinping has imposed a steadily widening series of austerity measures since 2013 to discourage corruption and what Beijing deems excessive spending. They have chilled revenues for high-end restaurants and sales of brandy, designer handbags and watches and other luxury imports.

It wasn't clear whether the latest tax, which explicitly targets imports, might run afoul of Beijing's World Trade Organization commitments to treat foreign and domestic goods equally. China has been the fastest-growing market for Rolls Royce, Ferrari and other luxury automakers, with some reporting annual sales gains of 50 to 100 percent in recent years, according to AP. The latest tax comes at a time when overall auto sales growth is slowing. Beijing helped to pull the market out of a slump last year by suspending a sales tax but that cut is due to end on Jan. 1.Buyers of luxury cars also pay taxes including one based on engine size that can add up to 40 percent to the purchase price.

Meanwhile, China officially established a new national steelmaking leader - the world's second-largest manufacturer - yesterday by merging two giant mills, as Beijing pushes consolidation in the industry to combat overcapacity, according to AFP. Shanghai-based Baosteel Group and Wuhan Iron and Steel Group, in the central province of Hubei, were combined to create China Baowu Steel Group, second only to Paris-listed ArcelorMittal. Its birth was marked with a ceremony in Shanghai attended by top national government and company officials. The combined new entity will have total assets of 730 billion yuan ($105.9 billion) and 228,000 employees, a Baowu statement said.

The two firms' combined steel topped 60 million tons last year, according to data from the World Steel Association, exceeding that of previous national leader Hesteel. Baosteel, which had been China's No. 2 steelmaker, has issued new stock to existing shareholders of Wuhan Iron and Steel to absorb the company. The new group's focus will be to "improve the international competitiveness" of China's steel industry, said Ma Guoqiang, Baowu's chairman. Chinese steel demand has slumped as economic growth slows and the global steel industry is hit by a glut.The crisis has seen manufacturers in Asia, Europe and the U.S. suffer huge losses and led to political frictions between trading partners and accusations of dumping. Beijing has vowed to eliminate 100-150 million tons of capacity - out of a total of 1.2 billion tons - by 2020.
RELATED TOPICS