VW shareholders call for reforms in wake of $4.3B US deal 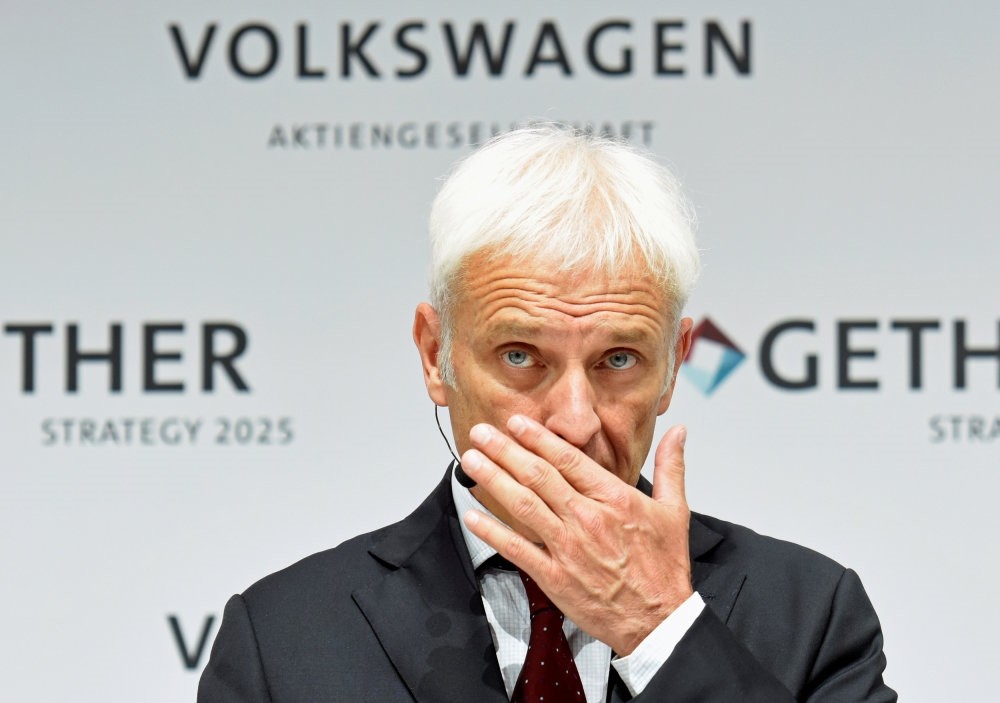 Volkswagen CEO Matthias Mueller wipes his nose as he addresses a news conference at Volkswagenu2019s headquarters in Wolfsburg.
by reuters Jan 13, 2017 12:00 am
Volkswagen investors demanded greater transparency and reforms at the carmaker after it admitted to criminal offences in rigging U.S. emissions tests and U.S. prosecutors indicted six current and former managers over the scandal. The German company agreed to pay $4.3 billion in civil and criminal fines in a settlement with the U.S. Justice Department on Wednesday, the largest ever U.S. penalty levied on an automaker.

Volkswagen (VW) admitted about 40 employees at its VW and Audi brands deleted thousands of documents in an effort to hide from U.S. authorities the systematic use of so-called defeat devices to rig diesel emissions tests, a scale of wrongdoing that led some investors to call for deep reforms.

"What is most disturbing ... is the pattern of deception, both in developing and perfecting the defeat devices, as well as deliberately obstructing the subsequent investigation," said Annie Bersagel, an adviser for responsible investments at Norwegian Mutual Insurance company Kommunal Landspensjonskasse (KLP). KLP and KLP mutual funds have small investments in both

"Going forward we would like to see more truly independent directors. This may change governance at the company where we see some issues, for example the awarding of large bonuses to current and former managers. We would like to see a clawback provision relating to violations."

Ingo Speich, a fund manager at Union Investment which holds about 0.6 percent of VW preference shares, said on Wednesday the company needed to "put everything on the table" about its wrongdoing to regain the trust of investors.

VW still faces lawsuits from about 20 U.S. states and from U.S. investors, and will spend years buying back or fixing nearly 580,000 polluting U.S. vehicles. It also faces claims from customers in Europe and Asia, after it admitted in September 2015 that up to 11 million vehicles worldwide could have defeat device software installed.So far, the scandal has cost VW up to $22 billion in the United States alone, in deals with owners, regulators, U.S. states and dealers. Despite the fines, VW has continued to pay

bonuses to top managers. For 2015, the year the scandal was uncovered, VW agreed to pay 12 current and former members of the management board at total of 63.2 million euros ($67.2 million) in fixed and flexible remuneration. It said board members would have 30 percent of their variable bonus awards withheld, if the share price remained below 140 euros.

In total, six current and former VW managers have been indicted, including Heinz-Jakob Neusser, former head of development for the VW brand. Five of them are in Germany and it

is unclear if they will come to the United States to face charges since Germany typically does not extradite its citizens. While senior managers, none of them are - or were - members

of VW's management board. At a press conference in Washington, U.S. attorney general

Loretta E. Lynch said U.S. authorities would continue to pursue those responsible for emissions cheating. The indictment said the six managers engaged in a 10-year conspiracy to cheat U.S. emissions tests and then cover up excessive emissions even as regulators questioned irregularities.
RELATED TOPICS