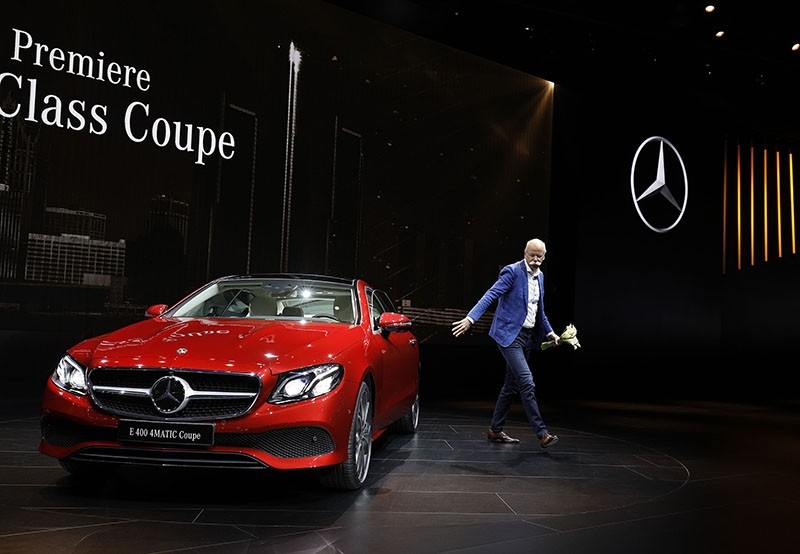 Dieter Zetsche, Head of Mercedes-Benz Cars, exits the new 2018 Mercedes-Benz E-Class Coupe during its reveal at the 2017 North American International Auto Show on January 9, 2017. (AFP Photo)
by Compiled from Wire Services Jan 16, 2017 12:00 am

Shares in German carmakers BMW, Daimler and Volkswagen fell after United States President-elect Donald Trump warned he will impose a border tax of 35 percent on vehicles imported from abroad to the U.S. market.

All three carmakers have invested heavily in factories in Mexico, where production costs are lower than the United States, with an eye to exporting smaller vehicles to the U.S. market.

In an interview with German newspaper Bild, published on Monday, Trump sharply criticized the German carmakers for failing to produce more cars on U.S. soil.

"If you want to build cars in the world, then I wish you all the best. You can build cars for the United States, but for every car that comes to the USA, you will pay 35 percent tax," Trump said in remarks that were translated into German.

"I would tell BMW that if you are building a factory in Mexico and plan to sell cars to the USA, without a 35 percent tax, then you can forget that," Trump said, adding that carmakers will instead have to build plants in the United States.

Trump went on to say Germany was a great car producer, noting that Mercedes-Benz cars were a frequent sight in New York, but claimed there was not enough reciprocity.

Germans were not buying Chevrolets at the same rate, he said, calling the business relationship an unfair one-way street.

Chevrolet sales have fallen sharply in Europe since parent company General Motors in 2013 said it will drop the Chevrolet brand in Europe by the end of 2015. Since then, GM has focused instead on promoting its Opel and Vauxhall marques.

Gabriel responded that "the U.S. needs to build better cars."

Beyond that, Gabriel suggested more self-confidence in dealing with Trump. He said: "We're not weak and inferior."

Mercedes-Benz and BMW already have sizeable factories in the United States where they build higher-margin sports utility vehicles (SUVs).

A BMW spokeswoman said a BMW Group plant in the central Mexican city of San Luis Potosi would build the BMW 3 Series starting from 2019, with the output intended for the world market. The plant in Mexico would be an addition to existing 3 Series production facilities in Germany and China.

Daimler has said it plans to begin assembling Mercedes-Benz vehicles in 2018 from a $1 billion facility shared with Renault-Nissan in Aguascalientes in Mexico. Daimler was not immediately available for comment.