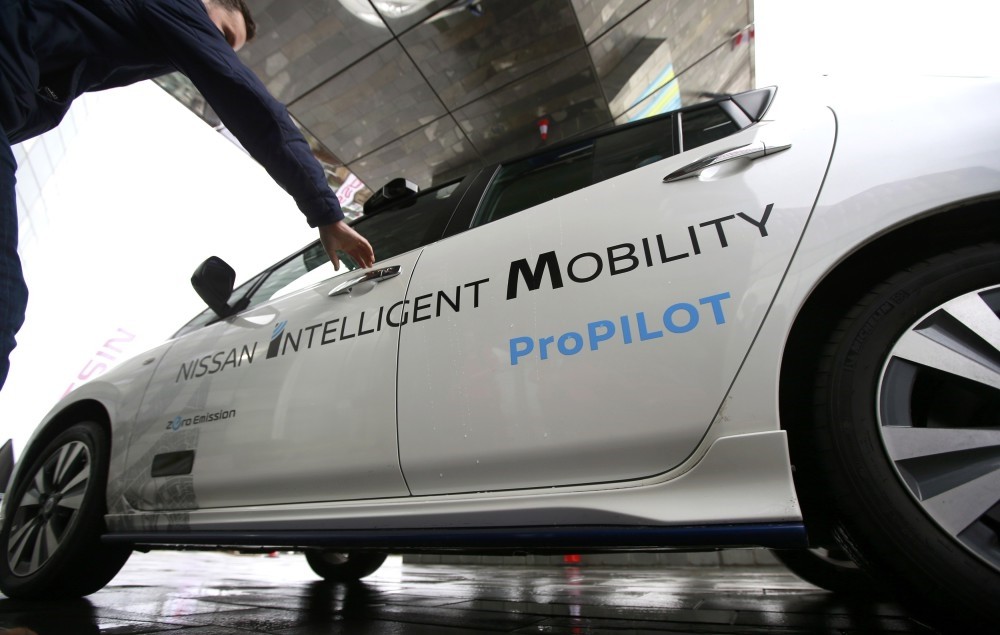 A journalist walks toward a modified Nissan Leaf, driverless car, during its first demonstration on public roads in Europe, in London.
by Mar 02, 2017 12:00 am

Connected cars, or ‘cellphones on wheels' will be able to do many things, including communicate with each other on the road and with the infrastructure around them through their computer networks

The car of the future will let you pay for gas or parking directly from your vehicle and receive traffic alerts and restaurant recommendations from your onboard digital assistant. Connected cars, or " cellphones on wheels," will be able to do those things and more, including communicate with each other on the road and with the infrastructure around them through their computer networks. And they will, of course, be able to drive themselves. Prototypes, fitted with the next generation 5G wireless communications network, turned heads at the Mobile World Congress (MWC) in Barcelona. But as the excitement and novelty over connected cars grows, vehicle, tech, and telecom firms are struggling with how to handle the inevitable legal and ethical issues. Add to that the risk of cyberattack and reliability issues surrounding a fast and stable internet connection and connected cars face many obstacles before they can ever be set loose.

"Connected cars pose a significant risk from a cybersecurity perspective," said Jeff Massimilla, head of cybersecurity at General Motors, during a discussion at the MWC.

This is the industry's biggest worry: Hacking. A hacker could easily take over a car's network and disable brakes, the transmission, or simply shut the car down. And that worry is hardly unfounded: Connected cars were hacked in 2015 during testing.

According to data presented Monday by Masayoshi Son, chief executive of telecoms giant SoftBank, cyber attacks against connected objects, objects with internet connectivity, have multiplied by four and five times between 2015 and 2016. To mitigate the risks, telecom and vehicle firms have teamed up to enhance collaboration.

"We cannot do it alone," said tech executive Ogi Redzic, who heads the connected vehicles services at Renault-Nissan. Renault-Nissan partnered with Microsoft last September, and its cars plan to use Microsoft Cortana as a digital assistant.

Three years ago, Volkswagen acquired Blackberry's European research and development center, a group of 200 engineers, to update its connected software. The success of connected vehicles will also hinge on the ability of an internet network to enable lightning-quick downloads or support split-second activities, such as the automatic traffic movement of driverless cars.

The current 4G standard enables fast broadband access via mobile smart phones, but government and manufacturers see the next generation enabling connection speeds of up to 1,000 times faster than current ones.

"When there will be many (connected) cars on the roads, there will be flow and bandwidth issues to make the system work," said Guillaume Crunelle, an automotive analyst at Deloitte.

The new, fifth generation of mobile networks is expected to enable communications between cars and infrastructure, automated maneuvers such as overtaking and braking, and emergency warning and call systems, among others.

Commercialization of 5G is not expected to start before 2020, however, as companies and governments negotiate to try to standardize norms between different countries for smooth 5G use worldwide.