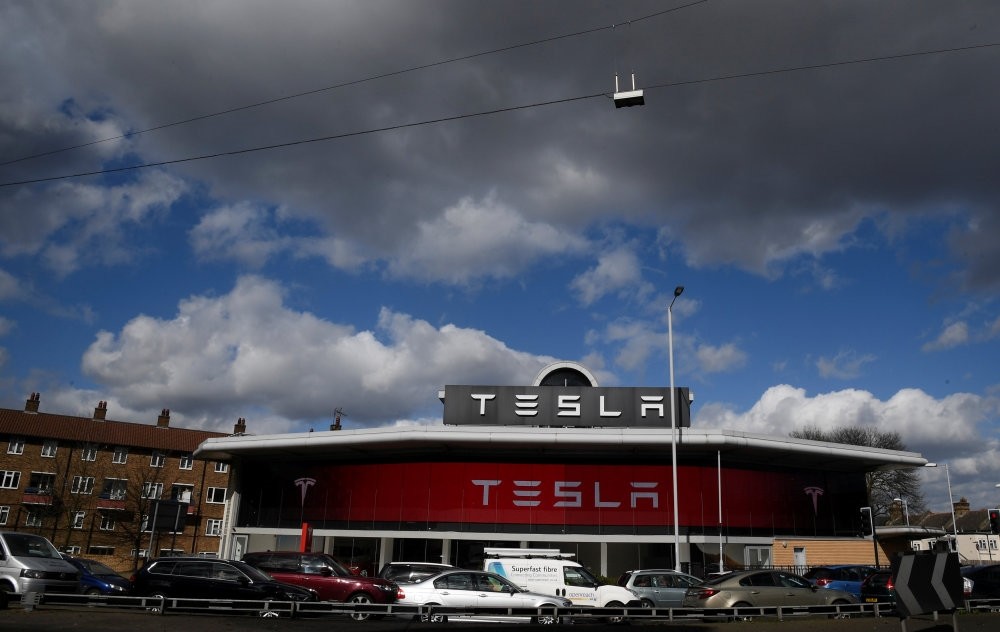 A Tesla car showroom is seen in west London, Britain.
by Apr 05, 2017 12:00 am
Tesla on Monday became the second-largest U.S. car maker in terms of market capitalization, displacing Ford, whose sales lagged amid concerns about the ability of the US market to keep growing. Many major auto makers reported U.S. sales declines in March compared to a year ago, but Tesla over the weekend said it saw a huge jump in vehicles delivered to consumers in the first three months of the year.

That was enough to send the electric car maker's stock soaring Monday, even as investors punished major car brands for reporting lower-than-expected March sales. Tesla said it delivered 25,000 of its high-tech vehicles in the January-March period -- a 69 percent surge compared to the first three months of 2016 -- indicating it was on its way to meeting its goal of 50,000 vehicle deliveries by mid-2017. Late last year, the company reported its first quarterly profit in more than three years, but then slipped back into unprofitability in the following quarter.

Investors still rewarded the company on Monday, with stock movements reshuffling the hierarchy among US carmakers. Tesla Motors overtook Ford for the number two spot and closed the gap with GM, the biggest US automaker by market capitalization. At market close, Tesla was up 7.3 percent to $298.52 for a market capitalization of $48.63 billion.

Tesla founder and CEO Elon Musk marked the occasion on Twitter with a dig at short sellers, investors who bet that a company's stock will decline.

For the industry as a whole, it may indeed be stormy weather. Car companies failed to meet forecasts of an overall March sales increase, which fell instead industry-wide by 1.6 percent, according to an estimate by the tracking firm Autodata. The seasonally-adjusted annual rate for US vehicle sales fell to 16.62 million units, versus 16.67 million units a year ago, Autodata reported. Despite the bad news, there were bright spots among established auto makers.

But the news was not good for many other big players. Ford reported that sales fell a worse-than-expected 7.2 percent, while Toyota sales dropped 2.1 percent, compared to the same period last year.

FCA US, the American arm of Fiat Chrysler, continued to struggle, reporting a five percent decline last month, while in the first three months of the year, sales were down eight percent. Record Honda truck and SUV sales could not help the Japanese car maker notch an overall increase last month, as sales slipped 0.7 percent, when accounting for declines at its Acura luxury brand.
RELATED TOPICS