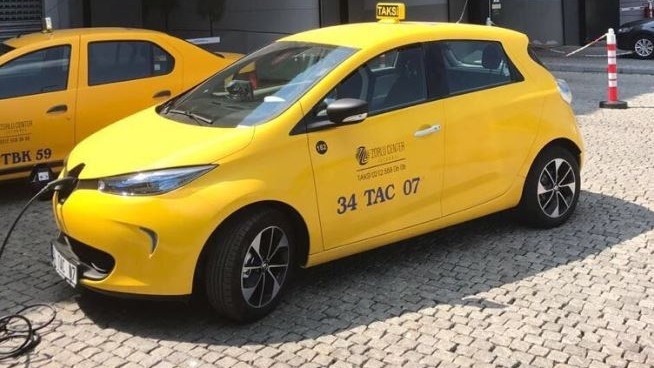 The era of electric taxis officially kicked off this week in Istanbul, with the first three starting their service at Zorlu Center Shopping Mall's taxi stand in Zincirlikuyu. With new vehicles being integrated weekly, the number of electric taxis in the project is expected to reach 9,000.

The Electric Taxi Project, which was previously reported on by Turkish daily Dünya, has been officially initiated in Istanbul. The vehicles included in the Electric Taxi Project are primarily Renault's "Zoes" model. DenizBank provided financing for the project, and charging stations are located at DenizBank, Migros, Ispark car parks and taxi stands. While Turkcell is providing data service for the vehicles, the information technology services have been taken over by Ceiia and the car insurance services have been provided by Axa.

Uğur explained that he leased the first electric taxi to set an example for his colleagues, highlighting the fact that an electric taxi can be bought for the fuel cost of other regular vehicles. Recalling that when they worked with regular taxis, their average monthly operation and fuel costs stood at around TL 6,000 ($1,693), Uğur said they leased these electric vehicles for $5,500 per month over a 60-month period. "At the end of the lease, the vehicle will be ours. In other words, this vehicle, which costs TL 130,000, will be purchased for the monthly expense of other vehicles," he said and continued, "Most importantly, we do not have the extra fuel cost. From now on, we will not have to concern ourselves with the prices of petroleum products."