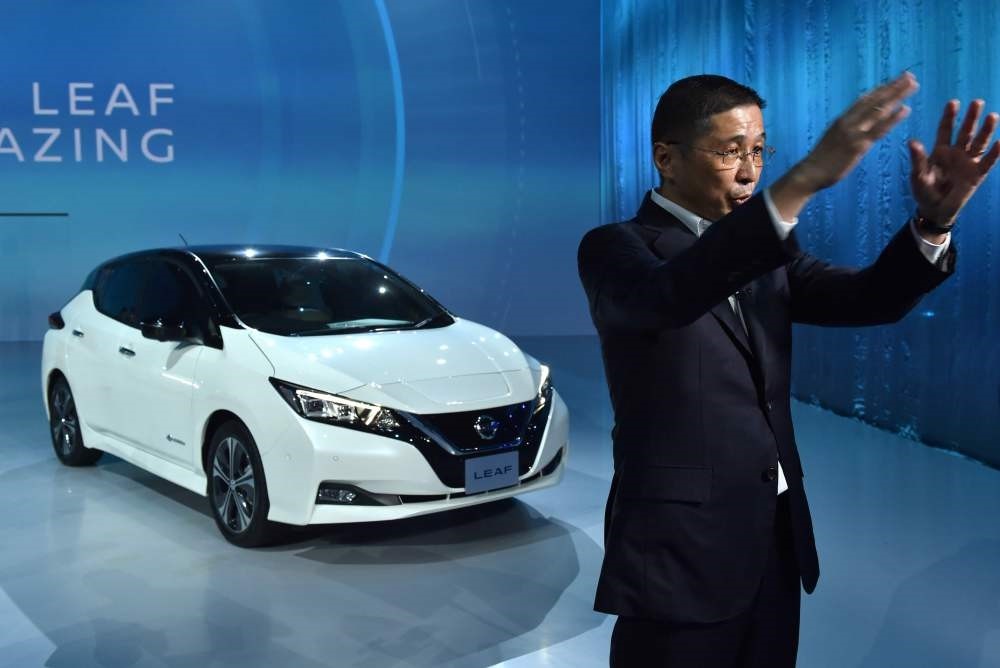 Japan's Nissan Motor President and CEO Hiroto Saikawa speaks in a television interview with the company's new Nissan LEAF, the next evolution of the zero-emission electric vehicle, at the world premiere, yesterday.
by Associated Press Sep 07, 2017 12:00 am

Nissan's new Leaf electric car goes farther on a charge and comes with a new type of drive technology and the possibility of single-pedal driving. But whether it can catch on with anyone but the most zealously green-minded remains to be seen. The zero-emissions vehicle -which Japanese automaker Nissan Motor Co. promises a range of about 400 kilometers in Japanese driving conditions or 150 miles in the U.S., before needing another charge. That's up from up to 280 kilometers or 107 miles for Leaf models on sale now.

The distances depend on driving conditions and how much other items in the car such as heating are used. Gas-engine cars generally get as much as 500 miles or 600 miles on a tank of gas. Analysts say the biggest obstacle for electric cars' becoming more widespread is their limited range per charge. Several breakthroughs in battery technology are likely needed before they become affordable and practical for regular consumers. Koichi Sugimoto, analyst at Mitsubishi UFJ Morgan Stanley Securities Co. in Tokyo, says many automakers are selling green models because of tightening emissions regulations, especially in Europe and California, rather than because of what he called "natural sales growth."

"There really is no outstanding attractive quality about an electric vehicle," he said, noting drawbacks such as finding charging stations, as well as the time needed to charge. That remains 40 minutes for the new Leaf, even with the quick charging. With normal charging, 16 hours would be needed for a three-kilowatt system, and eight hours at six-kilowatts.

"It's more about an effort to make a better society, so we are looking at a decade or two decades ahead," said Sugimoto. The Leaf has one pedal that accelerates and slows the vehicle based on how much the driver pushes it, reserving the separate brake pedal for emergencies.

The feature is made possible by the switching on-and-off feature of electric gadgetry, unlike the more standard internal combustion engine, and it's already available on other electric vehicles like those from U.S. maker Tesla. The Leaf also offers a technology not directly related to its being electric -a semi-autonomous drive feature that Nissan calls ProPilot can be switched on during single-lane highway driving. It also parks itself, taking control of the steering, accelerating and braking, sliding into a parking spot or parallel parking.

The Leaf's restyled look is not that different from its past design, billed as sleek and aerodynamic to maximize range. The Leaf remains an important part of Yokohama-based Nissan's branding as a symbol of the company's commitment to the environment. Other Japanese automakers have not been as bullish on electric vehicles. Toyota Motor Corp. has been more aggressive about gas-electric hybrids, exemplified in its hit Prius model, and is expanding to plug-in hybrids, as well as hydrogen-powered vehicles. The new car will be available next month in Japan, followed by the United States, Canada and Japan in January 2018. The price tag in Japan will be 3.15 million yen (around $29,000).