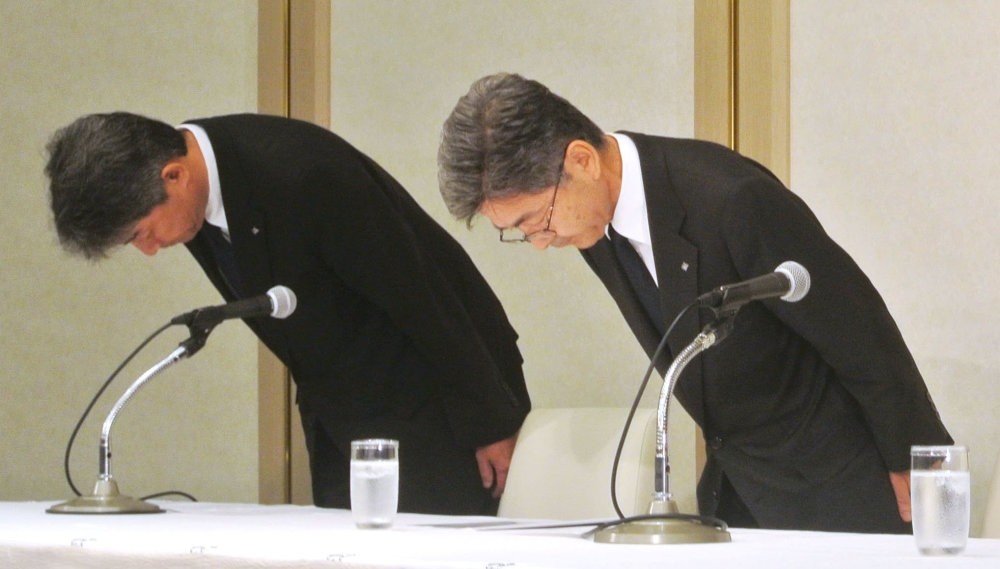 Kobe Steel's Executive Vice President Naoto Umehara (R) bows his head to apologize at a news conference in Tokyo.
by Oct 12, 2017 12:00 am

After Kobe Steel said it has systematically fabricated inspection data for aluminium and copper products, auto giants were scrambling to assess the quality of their vehicles that used products from the firm

"Products used (for both Japanese and British trains) met safety standards. But they did not meet the specifications that were agreed between us and Kobe Steel," a Hitachi spokesman told AFP. Honda spokesman Tamon Kusakabe said: "As to safety, we are still studying (a possible) impact."

"At this point, we don't see a critical problem as we have our own safety inspection on materials we use. But we are still investigating and it's premature to say" if recalls will be necessary. Auto giant Toyota has already said Kobe Steel supplied materials to one of its Japanese factories, which used them in hoods, rear doors and surrounding areas of certain vehicles. The industry ministry has pressed Kobe Steel to work with its clients, spread over a wide range of industries, to conduct urgent safety analysis.

Kobe Steel also admitted yesterday that it was in talks with one client who received steel powder that did not match specifications. However, it declined comment on a media report that materials used in semiconductors were also impacted by the scandal. The Kobe Steel scandal broke on Sunday when the manufacturer first admitted falsifying data linked to the strength and quality of products. An internal probe has revealed that data were fabricated for about 19,300 tons of aluminium products, 2,200 tons of copper products and 19,400 units of aluminium castings and forgings shipped to clients between September 2016 through August 2017.

The stock dived 22 percent on Tuesday to finish at 1,068 yen ($9.50), its maximum daily loss limit -- wiping almost one billion dollars off the firm's market value. Yesterday it plunged a further 17.8 percent to close at 878 yen. The company said the fabrications, which might have started a decade ago, could affect products sent to as many as 200 companies but it remained unclear whether the scandal affected product safety. The problems at Kobe Steel are an additional headache for Nissan, which has already announced a recall of more than a million vehicles in the domestic market over a certification issue. And it is just the latest in a series of affairs to embarrass Japanese industry. Airbag maker Takata went bankrupt after defective products were linked to 16 deaths and scores of injuries worldwide. Mitsubishi Motors last year admitted that it had been falsifying mileage tests for years. And electronics giant Toshiba has admitted that its executives had pressured underlings to cover up weak results for years after the 2008 global financial meltdown.