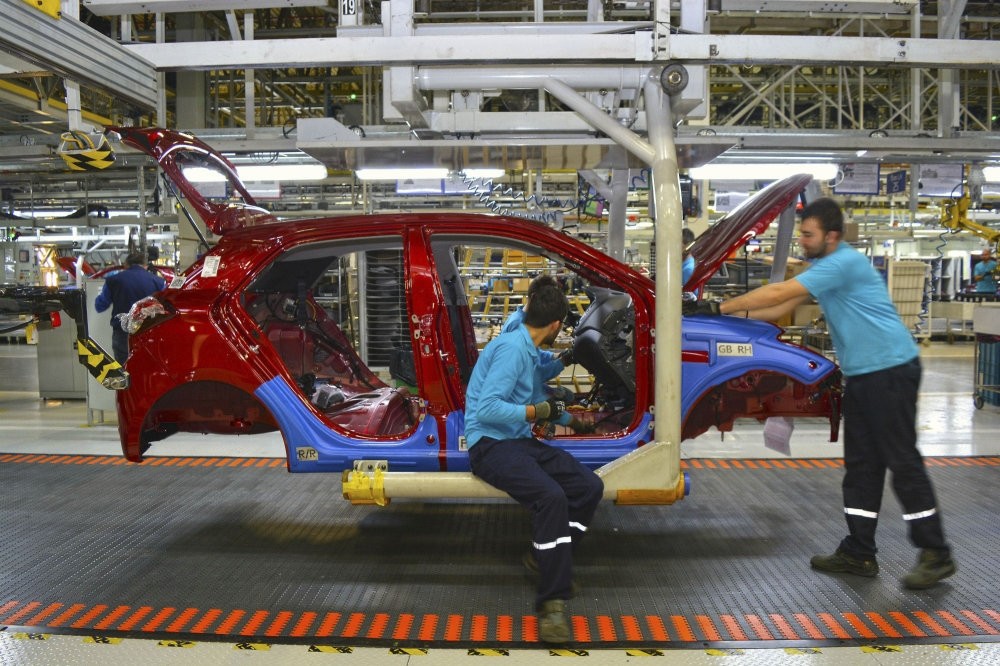 The Hyundai Assan factory in the industrial province of u0130zmit is a noteworthy example of Turkish-South Korean economic partnerships.
by Alen Lepan
Nov 18, 2017 12:00 am

Turkey and South Korea are eager to transform their long-lasting brotherhood into a strong economic partnership by increasing business cooperation, reaching potential and bringing bilateral trade to a higher level

Consul General of the Republic of Korea to Istanbul Cha Young Cheol said it is very important for both the Republic of Korea and Turkey to turn brotherhood felt by both sides into a strong economic partnership, during his speech at the presentation of the "DEİK South Korea Country Report" prepared by the Foreign Economic Relations Board (DEİK) Turkey-South Korea Business Council in Istanbul Friday. The meeting in Istanbul was attended by a number of officials and businessmen from both Turkey and South Korea. The report examined economic relations between Turkey and South Korea, the world's 12th largest economy.

Seen as a road map as to how the long-lasting economic relationship between the two countries could be improved in the upcoming period, the report analyzed the current potential in exports and investments.

Cheol also stressed that the economic partnership between the two countries should be improved and that economic relations could be improved with by increasing bilateral trade, adding that products with export potential should be subject to trade.

"There is huge potential for Turkey and Korea to cooperate, particularly in the construction sector in third countries, like Central Asia, where each country can use its competitive features to reach joint prosperity," Cheol underlined.

Cheol also pointed to recently signed projects in Turkey, particularly in the renewable energy sector, where local Kalyon and the South Korean Hanwha Group consortium won the tender in March this year for the Karapınar Renewable Energy Resource Area (YEKA), where the largest solar energy power plant in Turkey will be established.

Indicating that he has some suggestions in addition to the report on how to improve the current economic situation for both countries, Cheol said the residency and work permit process for Korean businessmen in Turkey is not only complex but also takes a lot of time, even before coming to Istanbul, adding that it needs to be simplified into one step.

visit the region in December

During his opening speech, DEİK Chairman Nail Olpak said there is a long-standing social and cultural heritage between South Korea and Turkey.

Underlining that within the scope of activities related to the Asia-Pacific region, the DEİK Turkey-South Korea Business Council has carried more than 18 events in the last year and announced that a visit to the region was planned with the participation of Turkish Prime Minister Binali Yıldırım in December.

Recalling that South Korea is expected to grow around 2.5-3 percent over the next 10 years, Olpak said Turkey never sees its own growth as enough, and they were passing through a period in which a number of international institutions have revised up the country's growth forecasts.

"When we evaluate these things together, bringing mutual trade, about which we are not really satisfied at the moment, to a higher level should be our priority. The free trade agreement, which entered into force in 2013, needs to be brought to a more functional and active state. To balance mutual trade in favor of our country, we have to work more intensively in sectors where competition is high such, as food, construction, textiles, ready-to-wear and renewable energy, and we must increase the diversity of products."

During his opening speech at the presentation of the report, DEİK Turkey-South Korea Business Council Chairman and Kibar Holding CEO Tamer Saka said in the report Turkey looked for an answer to how economic cooperation between Turkey and South Korea could be become more balanced, adding that the report also consisted of implications for ways relations between the two countries could be improved. "We looked at the issue in a multidimensional way by not only concentrating on exports or investment funds, and we tried to put forward a number of concrete suggestions," he said.

Seeing that the two countries have a rooted relationship, a lot more could be built over it today and tomorrow, and it could be brought to a much higher level, said Saka.

He added that the advantage of the two countries lies in the trust the two countries have in each other that was built over the years. "By taking this trust and friendship as a basis, we could improve our mutual trade and investments," he added.

According to the information compiled from the report, which was prepared by Sabancı University Istanbul Policy Center Specialist Dr. Altay Atlı, who presented the report at the meeting, Turkey is importing $12.3 for every $1 exported to South Korea.

Atlı also underscored that the report involves information on how current economic relations between the two countries could be improved. Export and import potentials, investments, the service sector and many other issues were discussed during the meeting.

Atlı also said the total South Korean capital in Turkey has reached $556 million, according to data from the Central Bank of Republic of Turkey (CBRT). In addition, as of June 30 this year, there are 55,205 foreign-funded companies in Turkey, of which 326 have South Korean capital, Atlı said, according to data compiled by the Economy Ministry. Moreover, the bilateral trade volume between the two countries reached $6.9 billion.

Atlı also underscored that one of the clearest definitions that summarizes South Korea's view of Turkey from an economic point of view is the statement on South Korea's Customs Administration website that says Turkey is the "bridgehead for entry to European and Central Asian markets." He added that around 25.4 million foreigners visited Turkey in 2016, of which 106,904 were foreigners with South Korean passports.