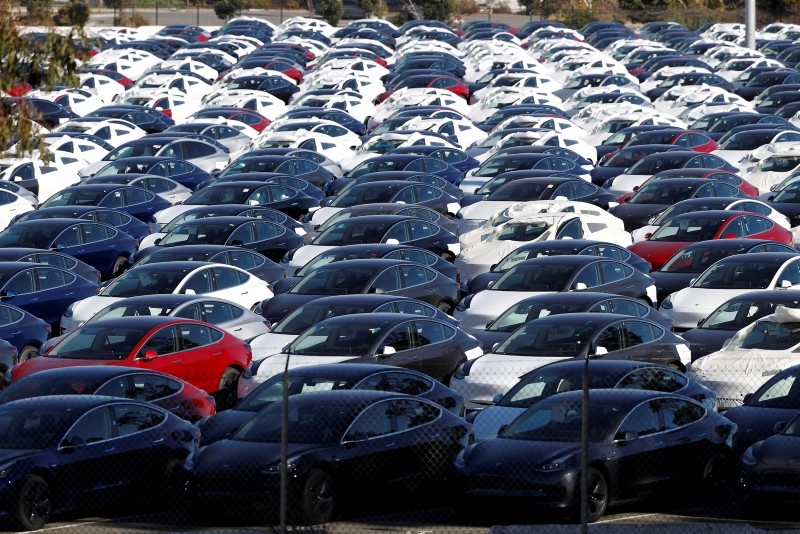 A tense and short-tempered Chief Executive Elon Musk barked at engineers on the Fremont, California assembly line. Tesla Inc pulled workers from other departments to keep pumping out the Model 3 electric sedans, disrupting production of the Model S and X lines. And weekend shifts were mandatory.

Tesla pulled out all the stops in the final week of June to meet its goal of making 5,000 Model 3s in a week, according to employees who spoke to Reuters.

Whether Tesla can do it week in and week out - and without relying on overtime and extra hands - is another question, and one that weighed on investors Monday, as shares slumped 2.3 percent to $335.07 but regained some of that ground in after-market trades.

Leading up to Sunday morning's production milestone, Musk paced the Model 3 line, snapping at his engineers when the around-the-clock production slowed or stopped due to problems with robots, one worker said. Tesla built a new line in just two weeks in a huge tent outside the main factory, an unprecedented move in an industry that takes years to plan out its assembly lines, and said the tented production area accounted for 20 percent of the Model 3s produced last week.

"They were borrowing people from our line all day to cover their (Model 3) breaks so the line would continue to move," said a Model S worker on Sunday.

Because of the focus on the Model 3, the S line is about 800 cars behind, the worker said.

"They've been throwing Model 3s ahead of the S to get painted to try to assure that they make their goal of 5,000," the worker said. "The paint department can't handle the volume."

Disruption of the Model S and X lines could threaten Tesla's target of building 100,000 of those vehicles in 2018. Tesla built 49,489 of those cars in the first half of this year.

Asked about the potential S and X impact, Tesla said it also produced 1,913 of those vehicles during the last week of the quarter along with its Model 3s.

Meanwhile, Tesla on Monday confirmed that the head of Model 3 production, who went on leave after chief executive Elon Musk took over his duties, will not be returning.

The departure of engineering senior vice president Doug Field came as Tesla appeared to have finally hit its self-imposed goal.

Musk has been managing the Tesla production line, which has been rejiggered to pump out cars faster.

Field will not be returning to the company, according to Tesla.

"After almost five years at Tesla, Doug Field is moving on," a company spokesman told AFP.

"We'd like to thank Doug for his hard work over the years and for everything he has done for Tesla."

"The manager and supervisor are verbally going around and saying: 'If you don't come in, you'll be written up'," one of the workers told Reuters last week.

Some employees are worried the frenetic pace plus long hours could burn out workers. One employee said they were told to keep working until they met their daily production mark, not when their shifts ended.

"They said starting tomorrow be prepared to work up to 12 hours," said the Model S employee on Monday. "It's gonna be basically 12 hours from now on and I've got a feeling it's gonna be six days a week."

To make its number, Tesla was willing to "spend any kind of money," a Gigafactory worker said, pointing to the new battery assembly-line flown in from Europe via cargo planes to the Gigafactory in May.

In the morning of Sunday, July 1, about five hours after the self-imposed second-quarter deadline had passed, the number 5,000 flashed on a countdown screen viewed by Tesla's Model 3 assembly-line workers. The Model 3 itself bore a "5,000" sign in its front window.

Tesla said on Monday that some of its Model 3 production would be on break as part of the July 4 holiday, with production to resume on Thursday. Tesla plans to build 6,000 Model 3s per week by August.

But the worker told to expect longer shifts warned that pushing assembly-line workers too hard could backfire.

"He (Musk) is gonna go through an awful lot of people because people are gonna start getting hurt left and right," by the fast-moving assembly line, the worker said.

"There's only so fast a person can move."

Tesla announced in June that it was cutting nine percent of its workforce to enhance profitability, but said the move would not affect an ambitious production ramp-up of its Model 3 sedan.

The job cuts are part of a company-wide restructuring to address excess staff in some areas due to the company's speedy growth, Musk said in an email to employees.

The cuts concern salaried staff but not production workers and will not affect Model 3 output targets, said Musk, who characterized the downsizing as an acknowledgement of the need to focus more on costs.

"Given that Tesla has never made an annual profit in the almost 15 years since we have existed, profit is obviously not what motivates us," Musk said in the message.

"What drives us is our mission to accelerate the world's transition to sustainable, clean energy, but we will never achieve that mission unless we eventually demonstrate that we can be sustainably profitable."

The Model 3, which starts at $35,000, is the key to turning Tesla from a niche maker of expensive electric cars to a profitable, mass-market automaker. The company badly needs cash from the compact cars to deliver on CEO Elon Musk's promise to post a net profit and positive cash flow in the third and fourth quarters. The company has had only two profitable quarters in its 15-year history.

Tesla critics now wonder if it can keep up the 5,000-per-week rate, and they question whether it can build high-quality vehicles underneath the heavy-duty tent on the site of what once was a joint-venture factory for General Motors and Toyota.

Dave Sullivan, manager of product analysis at AutoPacific Inc. and a former manufacturing manager for Ford Motor Co., said reaching the 5,000-per-week won't make Tesla profitable by itself. He predicted the company will have trouble sustaining it because parts suppliers will have difficulty keeping up and bottlenecks will develop in the body assembly and paint shops.

Tesla, he said, delayed delivery of many of the Model 3s that it made in the second-quarter to boost revenue and achieve the third-quarter profit that Musk promised. The company books revenue when vehicles are delivered.

"They did everything they can to artificially pump up the third quarter," Sullivan said. "I think the fourth quarter will be the quarter of reckoning."

CFRA Research analyst Efraim Levy lowered his rating on Tesla shares from "Hold" to "Sell," saying he doesn't see the production rate as "operationally or financially sustainable" in the short term. Over time he expects it to rise, though. Still, the stock is trading above his 12-month price target of $300, so he recommends selling it, he wrote Monday in a note to investors.

Consumer Edge Research Senior Analyst Jamie Albertine takes a more bullish view. He says Musk doesn't manage for quarterly results, and believes Tesla can keep producing at the current rate. "I don't believe their goal was to simply hit 5,000 a week and somehow revert to a lower production rate in the future," Albertine said. "Their goal is to hit it sustainably with high quality production."

He thinks the company can reach production of 10,000 vehicles per week, or roughly a half-million per year. That will significantly lower capital spending and other expenses so it can turn a profit, said Albertine, who has met with Tesla management.

UBS analyst Colin Langan said there was some relief the company hit the Model 3 production target, he noted that second-quarter vehicle deliveries of 40,740 missed his expectation for 51,000 and the consensus estimate of 49,000.

He also questioned whether the company could keep up the faster production and its profit outlook.

"We're very worried about quality and if you read the reports online there's significant quality issues. They still haven't proven they can produce these profitably. The math is very challenging in getting to a sustained profit," said Langan.

On Monday, the company said it delivered 18,440 Model 3s during the quarter to help satisfy a waiting list that now is around 420,000. Some have been holding out for their cars since March of 2016 when the company first started taking orders. Another 11,166 Model 3s are en route to be delivered to owners, the company said.

Tesla burned through more than $1 billion in cash in the first quarter.

Moody's Investor Service downgraded Tesla's debt into junk territory back in March, warning that Tesla won't have cash to cover $3.7 billion for normal operations, capital expenses and debt that comes due early next year. Tesla said cash from Model 3 sales will pay the bills and drive profits.

Musk told investors on a first-quarter earnings conference call that the company relied too heavily on automation. It had to hire more people to work at the factory.

The prices of Tesla's three convertible bonds were little moved by hitting the production goal, suggesting that share price volatility discouraged bondholders from converting their securities into equity despite the positive production news.

As of Friday's close, 34.83 million Tesla shares or 27.5 percent of the shares available for trading were sold short and investors did not appear to be covering their positions ahead of Monday's announcement, according Ihor Dusaniwsky, managing director at S3 Partners a financial analytics firm.

"You wonder are traders maxed out on risk on Tesla. At a certain point you're gorged. You can't take another bite," he said.

Tesla's milestone achievement did not alter a recommendation to short Tesla stock from David Kudla, founder and chief executive of Mainstay Capital Management in Grand Blanc, Michigan. Selling shares short is a bet the price will fall.

"The push to meet these self-imposed targets makes one question what cost was incurred to build these cars and how was quality adversely impacted," said Kudla, who is personally short Tesla stock.