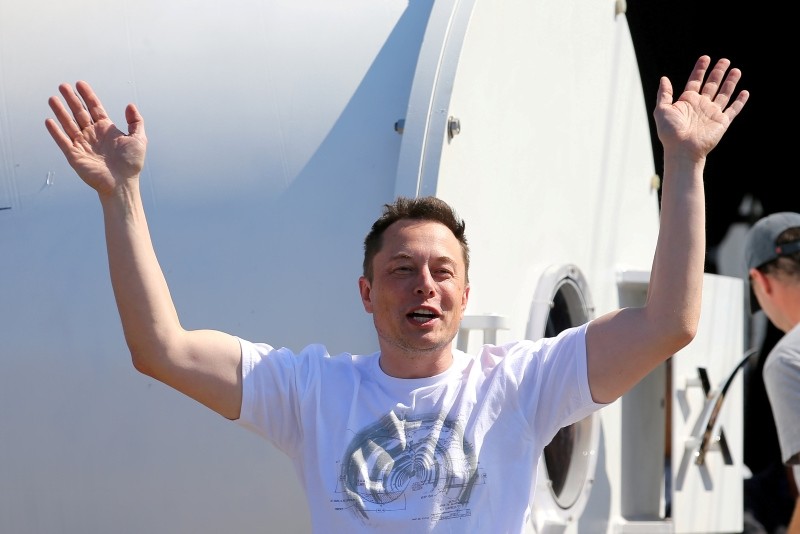 The live podcast showing eccentric billionaire Elon Musk smoking marijuana dealt another blow to his electric vehicle-maker Tesla as a Turkish municipality scrapped plans to work with the company.

Mehmet Gürbüz, the board chairman of the municipal transportation company in western Balıkesir province, said that they had invited Musk to the city with a letter for a possible purchase deal of 180 electric buses and their charging infrastructure.

Gürbüz told Anadolu Agency on Sunday that the deal would have been part of a series of efforts to drive Balıkesir forward as a tranquil city.

In that regard, the city aims to completely switch to electric vehicles, Gürbüz said, and they wanted to carry out a joint work with Tesla to make Balıkesir a silent pilot zone as an example to the world.

"We would be signing a serious deal for Tesla too as it would involve charging stations and infrastructure conversion. However, we find that Elon Musk's behavior live on air would serve as a negative example for the youth, unacceptable for the fight against drugs. That's why we give up on our goal to work with Tesla, and we retract our invitation to Elon Musk," Gürbüz said.

"We wanted to crown our 'silent city' project launched to increase Turkey's competitiveness and transform Balıkesir with a global brand, but after this development, we acted to implement different solutions outside the U.S. and with domestic brands being the priority," he added.

Tesla currently does not have a significant presence in Turkey, despite several statements from Musk that the company would launch in Turkey in 2018. Musk visited Turkey in November 2017 and met President Recep Tayyip Erdoğan in the wake of a satellite deal with Airbus – a company for which Musk's SpaceX is a subcontractor – and the announcement of the consortium for domestic car production.

There are a few hundred Tesla owners in the country, who order the cars from abroad, as the current infrastructure with the low number of charging stations and limited services are the biggest hurdles for the electric vehicle market.

The scrapped plan would have served as an advantageous start for Tesla since their from-scratch launch in the country would have been supported by a medium-scale public deal and presence in a city that is located in the midpoint of Turkey's three largest cities of Istanbul, Ankara and Izmir with good highway and rail connections. Neighboring Turkey's automotive production hub Bursa, Balıkesir is also home to various industries and the city aims to attract more manufacturing facilities in the years to come.

Turkey is highly dependent on oil imports and electric vehicles could provide some relief for its gasoline consumption. The domestic car project launched earlier this year by some of the country's biggest conglomerates and carmakers – also involving support from the government and the Union of Chambers and Commodity Exchanges (TOBB) – aims to concentrate on electric vehicle production.

The deal in Balıkesir has not been the only loss for Tesla and Musk in the wake of the pot-smoking broadcast late Thursday. About two hours into the YouTube video of "The Joe Rogan Experience," Musk accepts a sip of whiskey and a drag off a joint offered to him by Rogan, a comedian and podcast host who makes it a point to note that pot is legal in California.

Shortly after smoking, Musk — dressed in a black T-shirt that says "Occupy Mars" — looks at his phone and laughs, telling Rogan he is getting texts from friends asking why he's smoking weed during the interview. Later, Musk says he doesn't notice any effect from the joint.

"I'm not a regular smoker of weed," he says. When Rogan asks how often he smokes it, Musk replies: "Almost never." He knows a lot of people like weed, but "I don't find that it is very good for productivity," he tells Rogan. The appearance only seemed to add more doubts about Musk's recreational drug use.

The incident was followed by the company announcing early Friday that Chief Accounting Officer Dave Morton resigned after a month on the job, citing public attention and the fast pace of the post. Bloomberg News also reported that the head of human resources, Gaby Toledano, was stepping down.

Tesla shares plunged 6 percent Friday to $263.20, down from the $379 they hit in August when Musk suddenly announced plans to take the company private in another controversial move. He has since reversed course, with some investors accusing him of stock manipulation. At that time, Musk was pushing for a price target of $420 a share.

He also launched verbal attacks on Twitter at a diver who was involved in rescuing the Thai football team that was trapped in a cave, accusing him, without any proof, of being a pedophile.

Tesla is under extreme pressure to turn a sustained net profit starting this quarter, as promised by Musk. But in the second quarter it burned through $739.5 million in cash and lost a quarterly record $717.5 million.

Moody's Investor Service downgraded Tesla's debt into junk territory back in March, warning that Tesla won't have cash to cover $3.7 billion for normal operations, capital expenses and debt that comes due early next year. Tesla said cash from Model 3 sales will pay the bills and drive profits.