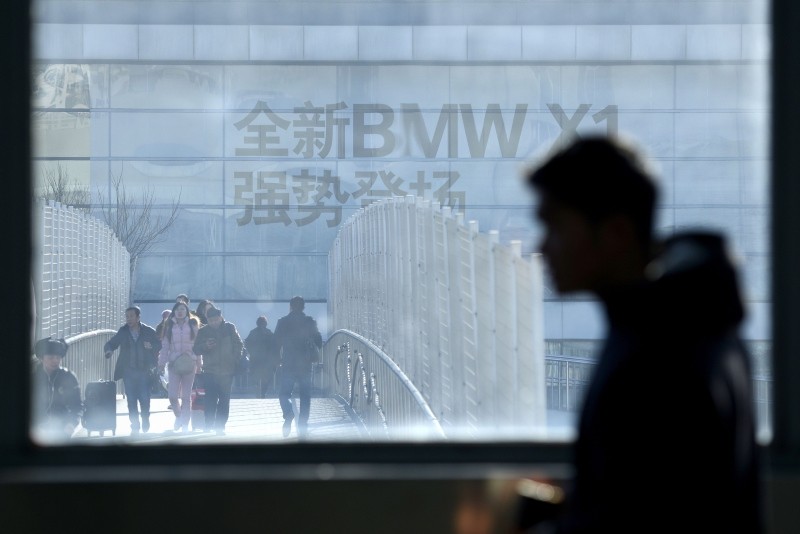 This Dec. 27, 2016 file photo shows an advertisement for German automaker BMW on the building of a BMW store, as seen through a window of a subway station in Beijing, China. (AFP Photo)
by French Press Agency - AFP
Oct 11, 2018 12:00 am

German luxury carmaker BMW announced Thursday a plan to take control of its China joint-venture, the first foreign automaker to take advantage of Beijing's new ownership rules for the sector.

BMW will acquire a further 25 percent stake in the venture with Brilliance China Automotive for 3.6 billion euros ($4.2 billion), the company said, bringing its stake to 75 percent by 2022.

Foreign automakers have long been restricted to holding no more than a 50 percent stake in their China operations, but Beijing decided to relax the ownership caps this year.

The reforms are part of Beijing's plan to further open its economy to foreign business, after years of facing pressure from the United States and Europe.

But U.S. and European business groups say the reforms have still not gone far enough, and have pushed for further opening.

To force the issue, and to hit back at China for alleged theft of American intellectual property, U.S. President Donald Trump has slapped tariffs on roughly half of the imports from China.

The joint-venture "is the cornerstone of the BMW brand's sustained success in its largest single market," said Harald Kruger, BMW's chairman.

"BMW Group and Brilliance continue to set a good example of successful cooperation in China," he said.

The changes in ownership rules are a boon for foreign automakers which will gain a greater share of control and profits from their China operations, but hurt prospects for their Chinese partners.

Brilliance China's shares in Hong Kong have plummeted this year, and were suspended from trading on Thursday.

The two companies had extended their joint venture contract until 2040 and announced a plan to pump 3 billion euros ($3.5 billion) into expanding their auto plants in northeast Liaoning province — ramping up production capacity to 650,000 cars early next decade while creating 5,000 new jobs.

BMW has been hit particularly hard by the U.S.-China trade war with many of its SUVs imported from the U.S. facing new 25 percent taxes, while cars imported from other countries have benefited from China's tariff cut for vehicles from 25 percent to 15 percent.

With the new production capacity, the China joint-venture will start to produce BMW vehicles like fully-electric BMW iX3 for export globally from 2020, BMW said.

China's auto market, the world's largest, has faced headwinds this year as the economy slows.