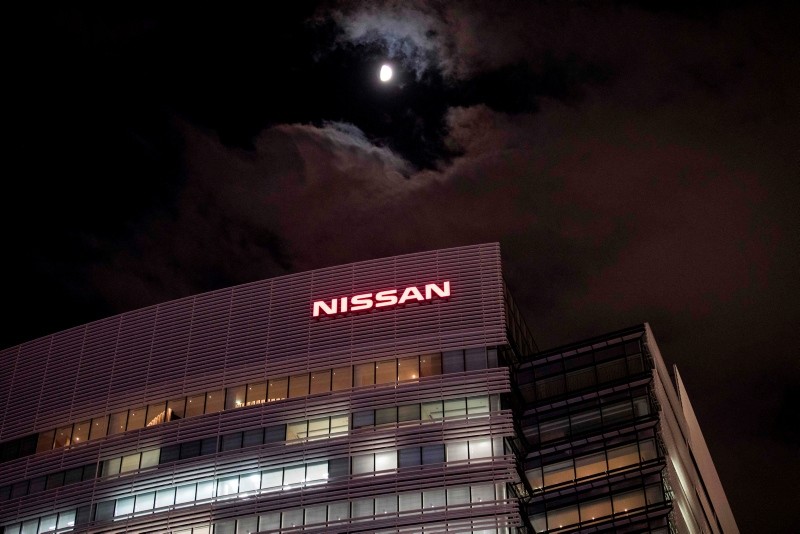 This picture shows a general view of the Nissan Motors headquarters in Yokohama, Kanagawa prefecture on December 17, 2018. (AFP Photo)
by Compiled from Wire Services Dec 17, 2018 12:00 am

The board of automaker Nissan failed Monday to agree a replacement for former chairman Carlos Ghosn after his arrest for financial misconduct, as tensions grow in the firm's alliance with Renault.

The Japanese company removed Ghosn from his post last month after he was detained on allegations of under-reporting his salary.

But it failed Monday to name a replacement, with CEO Hiroto Saikawa saying a committee advising the board on the decision needed more time.

"It was decided that the committee wishes to continue discussions, we accepted that," he told a press conference after the board met in Yokohama.

Media reports ahead of the meeting suggested the board was unlikely to reach a decision soon, in part because of open discord with French automaker Renault.

Nissan itself faces charges of allegedly submitting financial documents that understated Ghosn's pay, and Renault is now reportedly seeking more sway on the Japanese firm's board.

The French firm has reportedly urged Nissan to call a shareholder meeting to discuss its representation on the board and within its top management.

Nissan's board met on Monday after Thierry Bollore, Renault's deputy CEO, asked Nissan in a Dec. 14 letter to call an extraordinary shareholders meeting, a source said on Sunday.

It warned Nissan's indictment "creates significant risks to Renault, as Nissan's largest shareholder, and to the stability of our industrial alliance", the Wall Street Journal reported.

Saikawa declined to comment directly on the reports, and said Nissan would look to organize a shareholder meeting after a panel examining governance at the automaker reported its findings.

In a statement, Nissan said it was ready "at any time to provide a full briefing at a Renault board meeting in order to maintain an equal understanding among the Alliance partners".

Rift in the alliance

But Saikawa's comments also made it clear that relations between the partners are increasingly difficult.

"We have approached Renault. But the reaction of the Renault board was to refer us to their lawyers. So now Nissan's lawyers are communicating with Renault's lawyers," he said.

"My understanding is that the graphic details of the wrongdoing is not being conveyed to each and every one of the Renault board members. If we are afforded such an opportunity, we would very much like to explain."

Nissan said it has already shared its findings with the board of Mitsubishi Motors, which is the third, junior member of the car-making alliance.

While Nissan is almost 60 percent bigger by sales, it remains the junior partner in their shareholding hierarchy to Renault, which owns a 43.4 percent in its Japanese partner.

Nissan has a 15 percent non-voting stake in Renault, whose biggest shareholder is the French state with 15 percent.

Ghosn's arrest has laid bare the rifts in the alliance between Nissan, Renault and Mitsubishi Motors that the auto tycoon helped forge -- and was often credited with holding together.

While Nissan and Mitsubishi Motors quickly removed Ghosn from leadership positions after his arrest, Renault has kept him on as CEO and chairman.

Renault's interim chairman Philippe Lagayette said on Friday that its board had not considered replacing Ghosn as head of the French carmaker.

And while Saikawa launched a broadside against his former mentor shortly after his arrest, describing his "dark side", Renault has approached the allegations more cautiously.

The CEO said he would not rush the three-person panel advising the board on the new chairman.

"I don't have any deadline in mind. I wish them to spend all the time they need," he said.

A newly formed committee looking into governance at Nissan is to report its findings by March, but the decision on a new chairman could potentially stretch beyond that, he said.

As his former employer wrangles over his replacement, Ghosn remains in the one-man cell at a Tokyo detention center he has occupied since his shock arrest on November 19.

Prosecutors have already charged him with under-reporting his pay by around $44 million over the five years to 2015, and are also investigating claims he under-reported it further in the past three years.

He will be detained until at least December 20, when prosecutors will either file new charges or request another 10-day detention period while they continue investigations.

A range of additional claims of financial misconduct have been made against Ghosn, including using Nissan funds to purchase homes around the world, though prosecutors have yet to level those accusations formally.

He and his former right-hand man Greg Kelly, who is also under arrest, reportedly deny any wrongdoing, although Ghosn not made any public statements since his arrest.

The charges have sparked a legal battle over Ghosn's flat in Rio de Janeiro, with Nissan trying to prevent his family members from accessing the property and removing items.

A Brazilian court authorized relatives to access the apartment, despite claims from Nissan that they were removing corporate documents.

Nissan said it was establishing a special committee for improving governance, as well as an advisory committee to propose a chairman.

Saikawa said he expected the governance committee would "take a scalpel" to Nissan's governance team, and that he did not have a deadline for naming a successor to Ghosn.

"We shouldn't hurry, we should take our time ... I will make every effort (to ensure that a new chairman is selected soon), but I will refrain from setting a deadline for this," he said.

He also brushed off calling a shareholder meeting in the immediate future, saying that he planned to summon shareholders after the board comes up with changes based on recommendations from the special committee, expected in late March.

The board, until last week, had been expected to name an interim chairman on Monday. But a panel of external directors put off their selection, deciding to prioritize measures to improve governance, a source familiar with the matter said.

Its three external board members include retired Renault executive Jean-Baptiste Duzan, considered to represent the views of the French automaker. The other two are former bureaucrat and academic Masakazu Toyoda and racing car driver Keiko Ihara.

The special committee for governance includes the three outside board members and four other outsiders, including former judge Seiichiro Nishioka.

One candidate for chairman is Saikawa, who was hand-picked by Ghosn to succeed him as chief executive. He has denounced Ghosn and Kelly as the "masterminds" in a scheme to falsify income reports and abuse company money and assets.

Ghosn was born in Brazil of Lebanese ancestry and holds French citizenship. He was sent in by Renault in 1999 to turn around Nissan from the brink of bankruptcy.