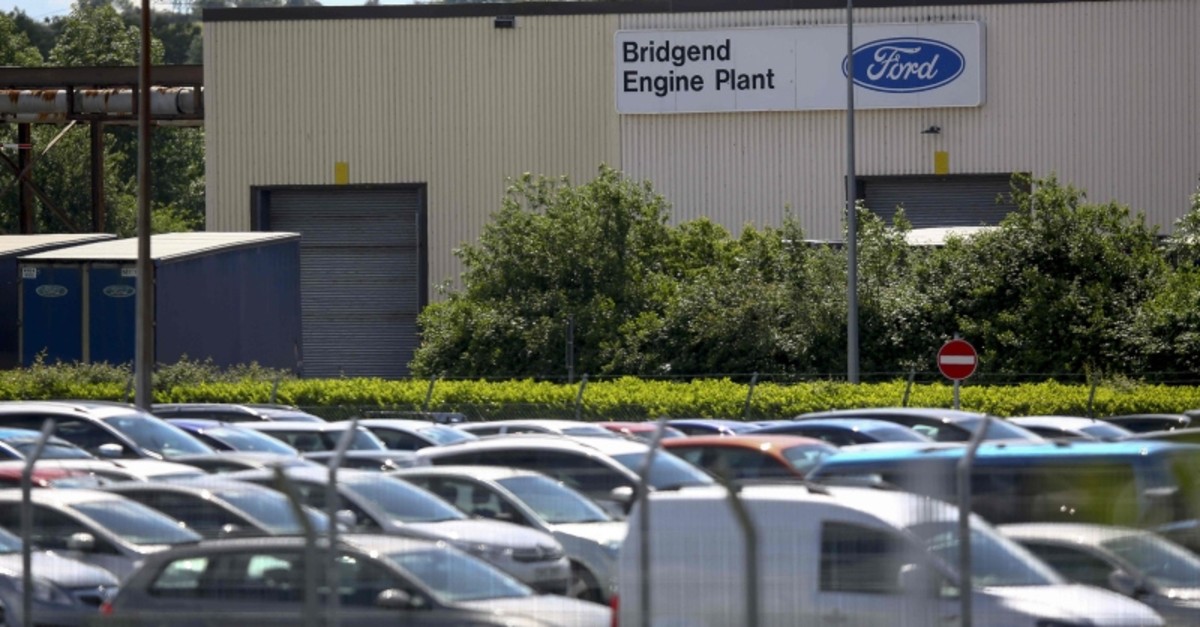 Cars are parked beside the Ford Bridgend Engine plant in south Wales on June 6, 2019, on the day that news was confirmed that the plant is to close next year. (AFP Photo)
by Compiled from Wire Services Jun 06, 2019 4:06 pm

Ford will shut its engine plant in Wales next year, costing about 1,700 jobs, the U.S. auto giant announced Thursday in a further blow to Britain's embattled car sector struggling with Brexit uncertainty and a global race to meet rising demand for electric vehicles.

The head of Ford's Europe division, Stuart Rowley, said in a company statement that "changing customer demand and cost disadvantages" had contributed to making the Bridgend facility in south Wales "economically unsustainable in the years ahead" and that it would shut in September 2020.

He said there would be an "enhanced separation program," including help for employees to get new jobs or start their own businesses.

The company blamed declining sales of gasoline engines and the end of a contract with Jaguar Land Rover for the closure. The Bridgend plant built around 20 percent of Britain's 2.7 million automotive engines last year.

Ford operates two factories in Britain making engines, which are exported for fitting in vehicles in Germany, Turkey, the U.S. and elsewhere. They could face delays and extra costs if Britain leaves the European Union without securing a deal with the EU.

Ford insisted that the U.S. group remained "committed to the U.K., where it continues to be the passenger and commercial vehicle sales leader."

Workers have long pushed for Bridgend to produce hybrid technology and electric vehicle components alongside a new third-party manufacturer to fill any surplus space but such investment has not been forthcoming.

"Significant efforts to identify new opportunities have not been successful," said Ford.

He called upon the British government and devolved Welsh assembly to help fight the closure and "prevent yet another grave injury to U.K. manufacturing."

The news is a further blow to the British car sector amid heightened uncertainty over the UK's departure from the European Union. It comes also as sales of diesel cars plummet with consumers increasingly switching to greener electric vehicles.

In recent months, Honda announced plans to shut its plant in central England in 2021, while fellow Japanese car maker Nissan reversed a decision to build its new X-Trail vehicle at its facility in the northeast.

A series of investment decisions are also pending, including whether Peugeot parent PSA will keep its Ellesmere Port plant open and if JLR will make electric cars in Britain.

The job cuts announced Thursday come on top of Ford's announcement last month to axe 7,000 jobs worldwide -- 10 percent of its global salaried workforce -- as part of a reorganization plan. Some 550 white collar jobs in Britain will also be affected, Rowley said.

Ford said it would take a hit of about $650 million (577 million euros) from the Welsh shutdown.

The U.S. auto giant has operated the plant in Bridgend, west of Cardiff, since 1980 and is one of the region's major employers.

The closure is also set to impact many companies that supply goods and services to the facility.

"We're hugely shocked by today's announcement, it's a real hammer blow for the Welsh economy and the community," said Jeff Beck, regional organizer for the GMB union.

"Regardless of today's announcement, GMB will continue to work with Ford, our sister unions and the Welsh government to find a solution to the issue and mitigate the effects of this devastating news."

Beck said the news was made worse coming in the same week that U.S. President Donald Trump was in Britain talking up a future post-Brexit trade deal between the two countries.

"When the plant closes, the new line is likely to be produced in Mexico by an American company," the union leader added.

"So much for the special relationship, Mr. Trump."

Ford has another engine plant in Dagenham, southeast England, and a site that makes transmissions in Liverpool in the northwest.

"They could do so because the fact remains that it is cheaper, easier and quicker to sack our workers than those in our competitor countries," he said.

"There was no warning about this at all," he said.

Many businesses are worried about the uncertainty around Britain's stalled departure from the European Union. Executives have held back on investments as they lack clarity on what commercial relations will be like between Britain and the rest of the EU, its biggest trading partner.

British Trade Minister Graham Stuart insisted Brexit was not to blame for the Ford closure, stressing that the automotive industry is in "massive global flux."

Rowley also said Bridgend closure has nothing to do with Brexit, adding that there would not have been a different decision.

Apart from Britain, Ford said it is also ending C-Max and Grand C-Max production in Germany's Saarlouis as of June 2019 and production at the Ford Aquitaine Industries Transmission Plant in France's Bordeaux as of August 2019.