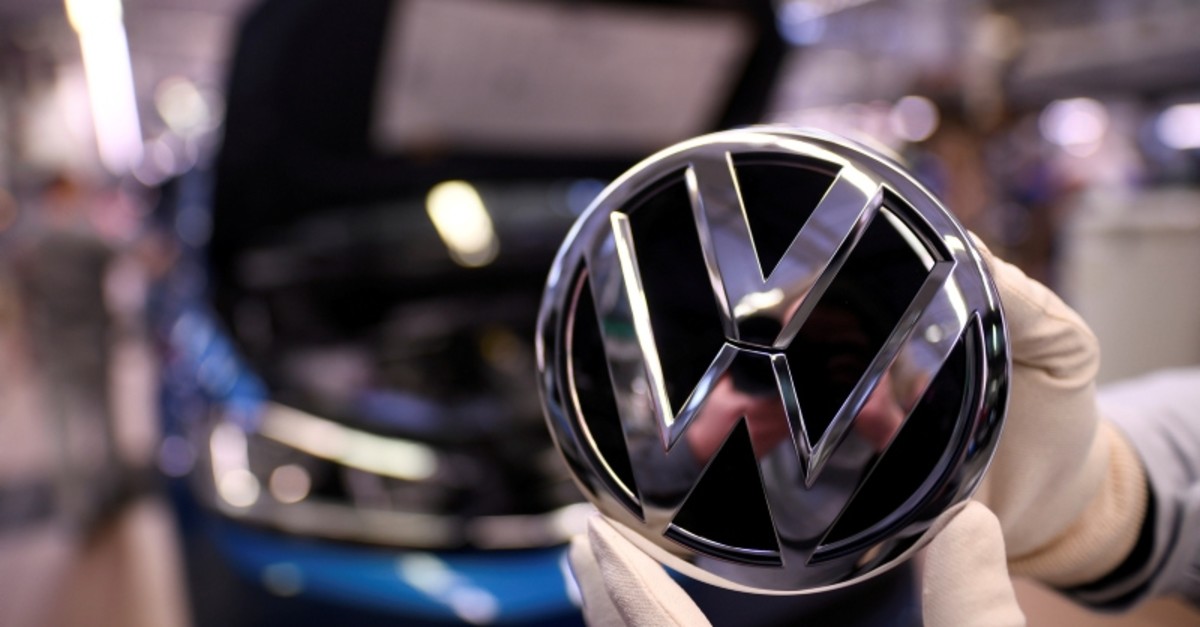 An employee holds a Volkswagen logo in a production line at the Volkswagen plant in Wolfsburg, Germany March 1, 2019. (Reuters Photo)
by Daily Sabah Oct 02, 2019 1:10 pm

Volkswagen has established a subsidiary in Turkey's western Manisa province, the country's Trade Registry Gazette showed Wednesday, adding that the unit will focus on designing, producing and assembling automobiles and trucks.

Volkswagen Turkey Otomotiv Sanayi ve Ticaret AŞ will have TL 943.5 million ($164.7 million) in capital and the parent company has paid a quarter of that amount, the gazette said. The remainder will be paid in the next two years.

The unit plans to carry out a wide range of production processes at the new plant, particularly the design, manufacture and assembly of automobiles, trucks and other vehicles, as well as their parts and components. The sale, import and export of these products will also be managed from the Manisa location.

A board member of the German carmaker told reporters last week in Berlin that the company is nearing a decision on building a new plant in Turkey.

"We are in final talks with Turkey," said Andreas Tostmann, board member in charge of production, adding he expected the talks to be completed ‪in two weeks, "perhaps earlier."

Giving more details on the plans, sources close to the company said the multi-brand factory would cost more than 1 billion euros ($1.09 billion).

It would employ nearly 4,000 in Manisa, which is near Izmir in western Anatolia, and construction could start at the end of 2020 with production starting in 2022, they said.

In November 2018, the carmaker announced its intentions to build a new industrial factory in Eastern Europe to manufacture the conventional engine (gasoline/diesel) versions of some of its major models, as it would produce electric vehicles in its German factories due to emission limitations in Europe.

As time went on, multiple rumors on who will host VW's new plant hit the headlines. Initially the company's list of potential hosts included five countries, but the list has since narrowed the choice down to Turkey and Bulgaria as the most likely locations.

Multiple reports have since said that VW is planning to build a multi-brand production plant in Turkey. Officials from the German carmaker have also been paying visits and holding talks in the two candidate countries over the past months, including a meeting between President Recep Tayyip Erdoğan and VW CEO Herbert Diess in June.

Turkey was said to have a high chance of being chosen in terms of the factors that direct the industry investment in an automotive brand, such as qualified human resources, sub-industry capacity, logistics solutions, total market size and export opportunities to neighboring countries.

The German carmaker's new plant is expected to begin production in 2022.

Turkey has an automotive history that goes back almost 50 years. As one of the world's leading countries in the automotive sector, Turkey has received investments from many brands, including Fiat, Renault, Mercedes-Benz, MAN, Otokar, Isuzu, Honda, Hyundai, Toyota and Temsa, for the production of automobiles, light commercial vehicles, trucks, and buses. In addition to a solid infrastructure in the automotive supplier industry, Turkey also has a skilled workforce experienced in the sector.

Turkey has been striving to get Volkswagen, one of its best-selling brands, to make an investment in the country for 14 years. Ferit Şahenk, president of VW's Turkey distributor Doğuş Holding, first invited VW to invest in 2005 at the Geneva Motor Show. In the following years, this call was repeated many times by both Doğuş and Ankara.