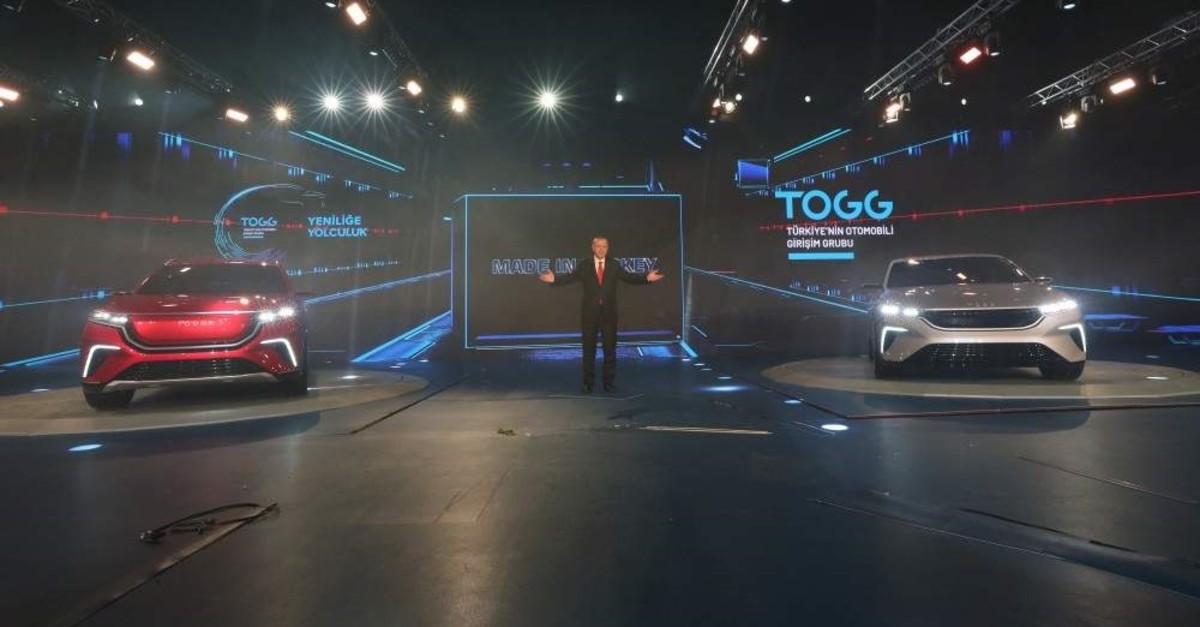 The long wait ended Friday as Turkey unveiled its first domestically developed electric car. With plans to hit the road in 2022, nearly TL 22 billion will be invested in the project

Turkey’s long journey to produce a fully homegrown car came to an end Friday as the country unveiled the first prototypes in a grand ceremony in the northwestern town of Gebze.

“Today, we are witnessing a historic day, the fruition of Turkey’s 60-year-long dream,” Erdoğan said in his speech at the unveiling ceremony at the Gebze Information Technologies (IT) Valley, which was also opened Friday.

“Turkey is several steps ahead of others by entering the electric automobile sector. We are not manufacturing cars for our needs alone. We are looking forward to establishing a global brand,” the president noted.

Erdoğan went on to say that Turkey is not only a market for new technologies but has become a country that develops, produces and exports them all over the world.
"We do not need to purchase a license or permission from anyone; we determine all the technical features ourselves," he added, highlighting the role of 100 Turkish engineers that worked on the project.

Erdoğan placed an advance order for the car. The two models unveiled were in red and white, the colors of the Turkish flag.

The fully electric SUV will come in two different engine configurations: 200 horsepower or 400 horsepower, Turkey’s Automobile Joint Venture Group (TOGG) CEO Gürcan Karakaş announced during the presentation.
The 400 horsepower will do 0 to 100 kph in 4.8 seconds. It will have a range of up to 500 kilometers and its locally produced Lithium-ion battery will reach 80% charge under 30 minutes.

The president also emphasized that the automobile "will not pollute the environment thanks to its zero-emission technology.”

Erdoğan later drove the prototype near the Gebze Information Technologies (IT) Valley.

Hours before the ceremony, some major details of the domestic car project were revealed, with the government announcing comprehensive incentives to support the endeavor.

TOGG comprises five of Turkey's leading industrial groups that have joined forces to build the car. It will establish a factory in the northwestern province of Bursa, often dubbed the capital Turkey's automotive industry, according to a presidential decree published in the country’s Official Gazette Friday.

Erdoğan said some 1 million square meters of a 4-million-square-meter parcel of land in Bursa's Gemlik district which currently belongs to the Turkish Armed Forces will be allocated for the factory. The production plant will be completed in 2021, and the first car will be produced in 2022.

The domestic electric car project will see a fixed investment of TL 22 billion over 13 years and will enable the production of five models and a total output of 175,000 vehicles per year.

The investment will enjoy comprehensive tax cuts, free land allocation, interest rate reductions and a government purchase guarantee of 30,000 vehicles until the end of 2035, according to the decree. Investors are obliged to provide at least TL 3.5 billion in cash capital by the end of 2023.

Five models of the car will be produced by a workforce of around 4,323 people, including 300 qualified personnel.

Industry and Technology Minister Mustafa Varank said they have already initiated works on necessary regulations as well as for establishing a recharging infrastructure suitable for the electric vehicles.

“With Turkey’s automobile, we are establishing a brand that will compete in the international market,” Varank said.

Turkey is already a big exporter to Europe of cars made domestically by firms such as Ford, Fiat Chrysler, Renault, Toyota and Hyundai. But the cars are made by global autos firms, usually in joint ventures with local partners.

“The project will help our automobile industry further increase its exports, which have reached $32 billion a year,” Varank said.

Turkey was Europe's ninth-largest car market as of November, according to the Automotive Distributors’ Association (ODD). Some 316,427 cars were sold in the country between January and November of this year, a decrease of 26% year-on-year.

Following repeated calls from Erdoğan, Turkey in November 2017 ventured into a groundbreaking initiative to manufacture its domestic automobile. The project has brought together the country’s largest manufacturers and companies in a consortium that includes Anadolu Group, BMC, Kök Group, Turkcell and Zorlu Holding, all experienced in their own areas of operation.

The five domestic firms, now with 19% shares each, and the Union of Chambers and Commodity Exchanges of Turkey (TOBB), with 5% of the shares, lead the TOGG joint venture. The TOGG Industry and Trade Inc.’s foundation and partnership agreements were signed on May 31, 2018.

The project, whose intellectual and industrial property rights will be fully owned by Turkey, is expected to contribute 50 billion euros ($55.81 billion) to the Turkish economy and 7 billion euros to the current account deficit, and create direct and indirect employment for 4,000 and 20,000 people, respectively.

The project to produce a fully homegrown car has been a longtime goal for Turkey.

Almost 60 years have passed since Turkey achieved its goal of producing domestic automobiles with Devrim (Revolution). As the first car developed and produced in Turkey, it was a glimmer of hope during the early 1960s and the symbol of the dream to produce a fully domestic automobile.

On June 16, 1961, then-President Cemal Gürsel unveiled his mission to develop an automobile that would meet the needs of the Turkish military for streetcars. The mission was addressed to the National Railways of the Republic of Turkey (TCDD). A team was commissioned and the car was designed and manufactured in a short time, with some difficulties encountered during the design of the engine and the gearbox.

Despite these technical difficulties and political problems, Devrim was showcased on Oct. 29, 1961, on the 38th anniversary of the foundation of the Republic, and then drove off to take Gürsel to Mustafa Kemal Atatürk’s mausoleum Anıtkabir.

Four cars manufactured upon the instruction of Gürsel at the Turkish Locomotive and Motor Industry Inc. (TÜLOMSAŞ), then named Eskişehir Railway Factories, were taken to Ankara by train on that October day.

One of these vehicles, which had insufficient gasoline in its tank per railway laws at the time, stopped when it ran out of fuel while Gürsel was behind the wheel for a test drive.

The car was later taken back to the central province of Eskişehir and was used in the factory for a while.

However, the fact that the car suddenly stopped on the road due to insufficient gasoline paved the way for further negative propaganda against the Devrim, followed by the termination of the project.

Only one of the four Devrim cars manufactured under the domestic automobile project has reached the present in a working state. The car is kept in a glass-encased section converted into a museum in the garden of TÜLOMSAŞ.

“They managed to hinder the production of Devrim, but they will not be able to hinder this automobile,” Erdoğan said Friday.