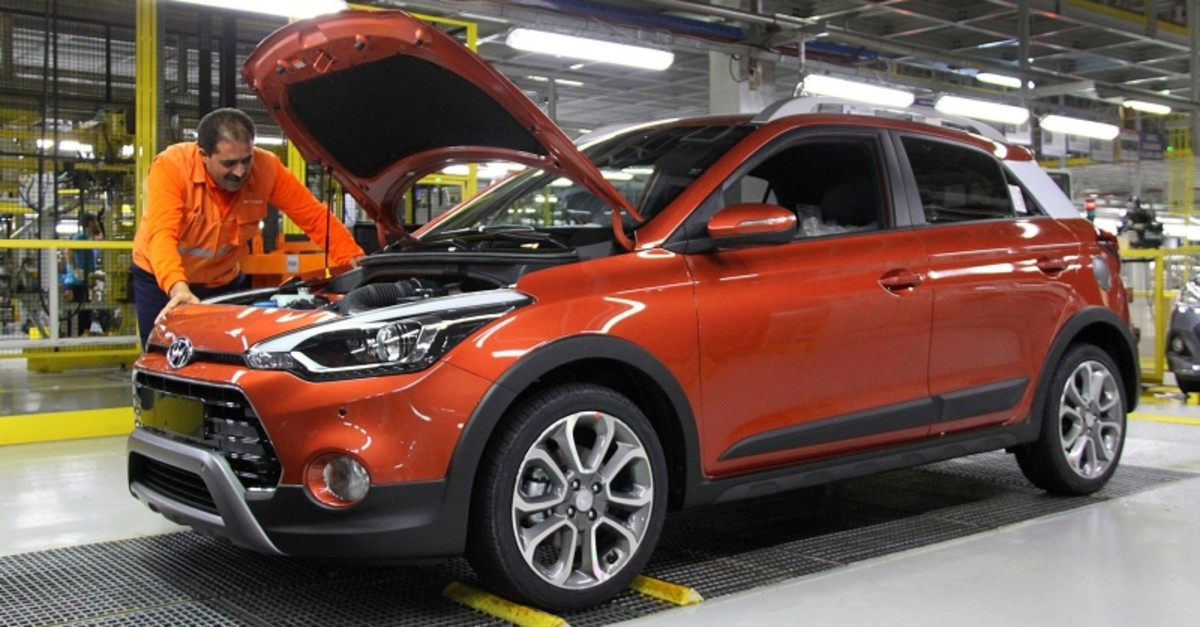 This file photo dated March 28, 2016 shows a Hyundai i20 rolled out of production line at the company's Izmit plant. (Photo: Sabah)
by Ufuk Sandık Jan 20, 2020 7:13 pm
The number of factories producing hybrid vehicles in Turkey will rise to four by the end of 2020. Hyundai Assan will begin hybrid vehicle production with the revamped i20 in the last quarter of 2020. It will also offer a hybrid engine option in the B-SUV model it will produce in 2021.

A major transformation is taking place in the automotive world. Brands are moving away from diesel and gasoline engine vehicle production and are rapidly turning toward hybrid and electric vehicle production. The same goes for the Turkish automotive industry. Following in Toyota, Oyak Renault and Ford Otosan's footsteps, Hyundai Assan is also beginning hybrid vehicle production. Turkey, which has risen to an upper league in the automotive sector, is now among the few countries producing hybrid vehicles. Hyundai Assan plans to start hybrid vehicle production in the last quarter of 2020. The first hybrid model to be produced will be the revamped i20. Then, the company will offer a hybrid engine option in the new B-SUV model, which will be produced in 2021. Turkey's production will contribute significantly to meeting the South Korean brand's hybrid and electric vehicle sales targets.

Turkey's hybrid vehicle production adventure began four years ago. First, Toyota produced the hybrid technology C-HR at its plants in Sakarya in 2016. The Japanese brand later increased the number of hybrid models it produced to two along with the 12th generation Corolla sedan model. Also, Oyak Renault started the production of hybrid and plug-in hybrid engines. Hybrid engines to be produced in Bursa will be exported for use in Renault Group brands. Ford Otosan has also begun producing the rechargeable, hybrid electric commercial vehicle Transit Custom PHEV at its Gölcük facilities. There is no large factory in Turkey that does not produce hybrid vehicles, with the exception of Tofaş.

The i10 produced in Turkey since 2013 has been completely revamped. The test drive of i10 produced in İzmit was carried out in Lisbon, Portugal. The i10, which is scheduled to be available in March in Turkey, offers two new engine options: 1.0 liter and 1.2 liter. The car stands out with features such as a rear-view camera, eight-inch touchscreen, Apple Car-Play and Android Auto.

Hyundai Assan's planned B-SUV investment in Turkey has reached the final stage. The production date for the new B-SUV model has been set for March 2021. Given the rapidly growing demand for SUV models in Europe and Turkey, the new model is expected to be a significant milestone for Hyundai Assan. The share of SUV models in the brand's sales in Turkey soared from 25% to 45% in 2019.

In 2019, hybrid car sales rose to a record high, reaching 11,974 units with a 207.1% hike. In 2018, the hybrid car market saw 3,899 units sold. The market share of hybrid vehicles jumped from 0.80% to 3.09%. A total of 96% of the hybrid vehicles sold were Toyota brand cars. Toyota Turkey Marketing and Sales CEO Ali Haydar Bozkurt said that the number of hybrid cars in traffic is on the rise, adding: "We have carried out intensive studies for the spread of hybrid technology in our country. At this point, we see that both our brand and other brands have come to reap the fruits of investing in hybrid technology. The fact that consumers are turning to hybrid cars is proof that we are on the right track."