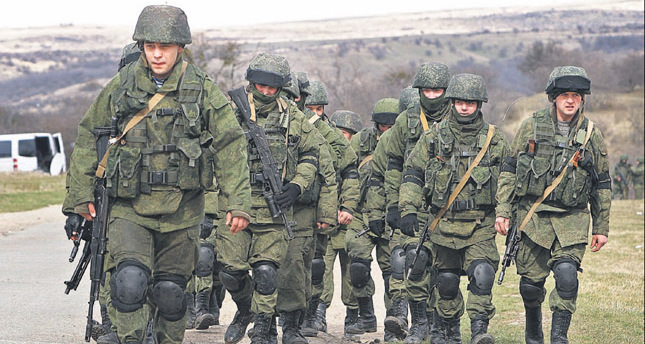 The Crimean parliament dominated by Russian majority yesterday voted unanimously to secede from Ukraine and join the Russian Federation. The latest escalation produced a strong rebuke from the newly appointed Ukrainian Prime Minister Arseny Yatseniuk, who said Crimea was and would remain an integral part of Ukraine and warned that the government was ready to protect the country. Ukrainian forces have so far not responded to the takeover of the Crimean peninsula by Russian forces. The deputy prime minister of Crimea announced that a referendum on the status of Crimea will be held on March 16. Sitting just on the other side of the Black Sea, Turkey is closely monitoring the growing tension in Ukraine and Crimea.

On this issue, Turkish Foreign Ministry Spokesperson Tanju Bilgiç stated, "For Turkey, the most important principle is the territorial integrity and political unity of Ukraine.

We will continue our efforts to bring stability and internal peace to Crimea. Moreover, Crimean Tatars are one of the main principles of our policy on Ukraine."

Şener Aktürk, an assistant professor of international relations at Koç University, noted, "The Crimean autonomous region already attempted to secede from Ukraine and join Russia in the early 1990s, especially in 1994. But at that time, Russia under Yeltsin was not willing to provoke an international crisis by annexing Crimea, and the central government in Kiev reached an agreement that provided autonomy for the Crimean region. Crimea is still the only autonomous region within Ukraine."

Aktürk added, "The Russian nationalist separatists in Crimea try to justify their attempts at secession from Ukraine, independence and [re-]unification with Russia on the basis of two basic facts: First, that Crimea has an ethnic Russian majority, and second, that Crimea was part of the Russian Soviet Socialist Republic until 1954, at which point it was transferred to the Ukrainian Soviet Socialist Republic under Khrushchev.

However, both of these facts are built on a sad episode of the mid-20th century, namely, the genocidal deportation of Crimean Tatars from their ancient homeland in 1944 to Central Asia, which resulted in the death of somewhere between 25 and 46 percent of all Crimean Tatars in the Soviet Union, and the subsequent ethnic Russian colonization of the Crimean peninsula. If it was not for the wholesale deportation and mass killing of the Crimean Tatars, the obstruction of their return from Central Asia and the ethnic Russian settlers who were brought in their stead, there would not have been an ethnic Russian majority in Crimea today.

Secondly, the Crimean autonomy that was created under Lenin in the Soviet Union was not created for the ethnic Russians but for the Crimean Tatars. "On the other hand, the new Ukrainian government in Kiev made mistakes in its handling of the country's ethnic, linguistic and cultural diversity, such that it alienated the Russianspeaking and culturally Russified eastern and southern Ukrainian regions such as Donetsk, Luhansk, Odessa and Crimea. Any Ukrainian government has to take into account that this country includes millions of Russian speakers and Ukrainian speakers, and as such, it has to adopt official policies that I describe under the heading of a 'multi-ethnic regime' in my book, 'Regimes of Ethnicity and Nationhood in Germany, Russia, and Turkey,'" he added.

Aktürk stated that members of the international community, in particular the United States, the United Kingdom, and Russia had an obligation to preserve and protect Ukraine's territorial integrity. "These three states explicitly guaranteed Ukraine's territorial integrity in the famous Budapest Memorandum of 1994, in exchange for Ukraine surrendering what was then the third largest nuclear weapons arsenal to the Russian Federation. This guarantee was invoked and reaffirmed by the United States as recently as 2009. If the international community now fails to protect Ukraine's territorial integrity despite Ukraine's surrender of massive nuclear weapons for this guarantee alone, I think it will give a very bad signal to Iran, North Korea, and other states in Russia's periphery that already have or are trying to acquire the capacity to have nuclear weapons," he noted.

Meanwhile, Turkish Foreign Minister Ahmet Davutoğlu, who is in Rome for the second round of the Libya support conference, discussed the situation in Crimea with chief diplomats of the Unite States, Italy, France, Germany and Britain. He said the most important principle was the territorial integrity of Ukraine Davutoğlu also visited Kiev last Friday amid tensions and met with the former spokesperson for the Tatar National Assembly, Mustafa Abdulcemil Kırımoğlu, to discuss the crisis with top officials of Ukraine's new government. Moreover, Davutoğlu had frequent telephone conversations with German, U.S. and Eastern European allies over the weekend. Davutoğlu said on Monday that Turkey will always stand by the Crimean Tatars, as he met with nearly 50 representatives of Crimean Associations.

Turkey supports and encourages the return of Tatars to their homeland, Davutoğlu said, adding that the current Turkish president and prime minister are warning not to even think of remaining indifferent to any matter related to our compatriots in Crimea or anywhere in the world. "Wherever our brothers and sisters are suffering, we will be the first to help them," Davutoğlu said.

The foreign minister stated earlier that "If Ukraine disintegrates; this will not be limited to Ukraine only. It will have an impact on Georgia, Moldova, Belarus, everywhere." He attended the second round of the Libya Support Conference yesterday in Rome. Chief diplomats of the Unite States, Italy, France, Germany and Britain also attended a meeting to hold informal talks on Ukraine in Rome.

Meanwhile, European Union leaders held a meeting on Thursday in Brussels to discuss the crisis and how they should respond.