Meet the last sworn virgins of the Albanian Alps 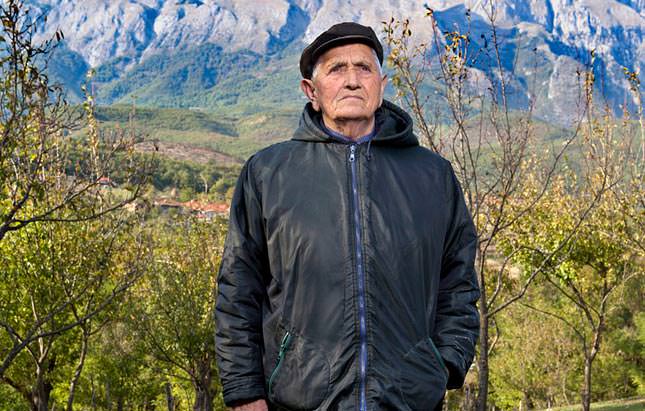 Living in small remote villages in the Albanian Alps, 'Burneshas' cut their hair and take an oath of chastity at a young age to help their families, but this centuries-old tradition is slowly being phased out

ISTANBUL – Very little is known about them, mostly since it's a dying tradition in this day and age but thanks to a photographer, Jill Peters, who took a special interest in "Burneshas", we can now peak into the lives and stories of the last sworn virgins of Albania. A Burnesha is not a geisha, don't let the "ha" at the end fool you. On the contrary, if one were to summarize the five-centuries-old tradition, it may well be phrased as, "women who dress and act like men." To become a Burnesha, one needs to cut her hair, replace female attire with menswear, and moreover, adopt the roles and mannerisms of men. The secret should be well kept from the outside world and the decision is usually made at an early age. In addition to transforming themselves into males, these women are also required to take a vow of celibacy. Denouncing yourself of your womanhood and looking and living like a man throughout the rest of your life might seem like madness to the women of the 21st century, but the "Sworn Virgins of Albania" have a centuries-old motivations behind this decision.

Mostly practiced in the patriarchal northern Albanian society, the sworn virgin hood was first reported by travelers, geographers and anthropologist who visited the northern Albanian Alps in the 19th and early 20th centuries. The practice existed and still exists to a lesser degree in the west of the Balkans, including Bosnia, Croatia, Serbia, Kosovo and Macedonia. The origins of the tradition date back to a 15th century code, "The Code of Leke Dukagijini" or simply "Kanun," developed by Leke Dukagjini. The Kanun, which was not a religious document but rather something practiced by Roman Catholics, Orthodox and also Muslims in Albania, dictated that families be patrilineal and patriarchal, meaning wealth is inherited through men, with the women obligated to move into their husband's household, thus resulting in the property- like treatment of women.

Under this system women were denied the right to vote, drive, earn money, smoke, own a gun, establish a business or wear pants. They couldn't become landowners and were not permitted to work. Arranged marriages with much older men in exchange for money was also a common practice.

A family without a male heir could be in trouble and lose all their wealth. Thus, an alternative was created. Women, whether to please their families or themselves, were given the choice to become a Sworn Virgin, get elevated to the status of a man and immediately gain all the rights that were granted to the male population. The oath swearing ceremonies were usually held in front of a committee of tribal elders. A Burnesha would then immediately embrace her new found personality, have her hair cut, don herself with male clothing, adapt male gestures, even up to the point of swearing and sometimes changing her name.

Breaking the oath was mostly punished by death, though it is uncertain whether such harsh punishment is still carried out today. However, taking back the vow was not really an option as the virgins would not want to be cast out of their society. Research suggests that while the main motivation behind taking the oath was to secure a better place in society, avoiding a specific unwanted marriage and the desire to inherit family wealth without getting married were also other reasons.

Freedom is likely another reason that some women decided to take this vow, on account of Albania's patrilineal culture where women were required to bear children, had no chance to get a divorce, constantly bear and raise children and even allow their husbands to beat them.
Another reason is after short-lived marriages, women who want to protect their children from being labeled as fatherless assumed the male roles, some even fooling a CNN photographer, Pepa Hirstova who visited the region." "These women are more masculine than men because they perform the role so perfectly," she said. "To think or talk about women's issues or love would dishonor them." Although the practice seems to have died out in Bosnia and Dalmatia, it is still carried out in northern Albania. After the Soviet bloc fell, women in most parts of Albania had as many rights as men, except in some northern regions of the country.

The current "sworn virgins" are believed to be mostly 50 years old and above. Jill Peters had visited the region for her project, "Sworn Virgins of Albania" and captured the portraits of living Burneshas. "I learned that the Burrnesha are well respected within their communities.

They possess an indescribable amount of strength and pride, and value their family honor above all else. Their absolute transition is wholly accepted, posited and taken without question by the people among whom they live. But most surprisingly, they have very few regrets for the great deal they have sacrificed," said Peters. Anthropologist Antonia Young's book "Women Who Become Men: Albanian Sworn Virgins" (2001) also underlined another fact that sometimes it is a necessity for women to turn themselves into men. In an example from Young's book, the 87-year-old Burnesha, Qamile Sterna is a perfect example since she was the born as the last daughter into a sonless family with nine children.