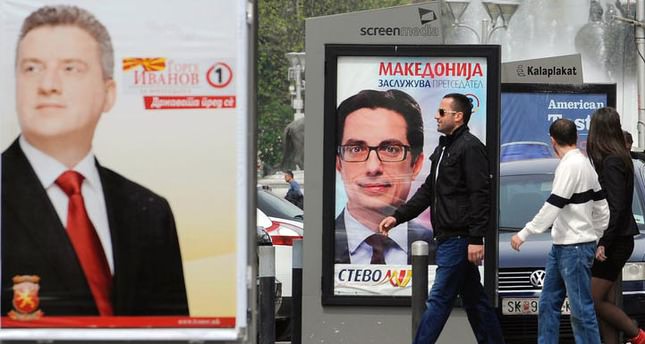 by AA Apr 13, 2014 12:00 am
SKOPJE — Macedonia is set to vote for a new president Sunday in the country's fifth presidential elections since gaining independence from Yugoslavia in 1991.

Four candidates are competing in the first round of the elections including incumbent President Gjorge Ivanov of the coalition "For a Better Macedonia" and social democrat Penarovski who are currently neck and neck in the polls.

Also running are Zoran Popovski of the coalition Citizens' Option for Macedonia; and Ilaz Halimi of the Albanian Democratic Party in Macedonia.


The Democratic Union for Integration Party, the largest Albanian representative party and Macedonia's third biggest, is against the process of electing the new president in a non-consensual form and called on its electorate to boycott the vote. This is due to the Ohrid Agreement which was signed in 2001 between the Republic of Macedonia and ethnic Albanian representatives. The agreement provided an end to the armed conflict between the National Liberation Army and Macedonian security forces and improved the rights of ethnic Albanians.

Approximately 64 percent of Macedonia's population is Macedonian while 25 percent is Albanian.

The presidential elections on Sunday, in which more than 1.7 million are expected to vote, are seen as a test for the critical early general elections of April 27.