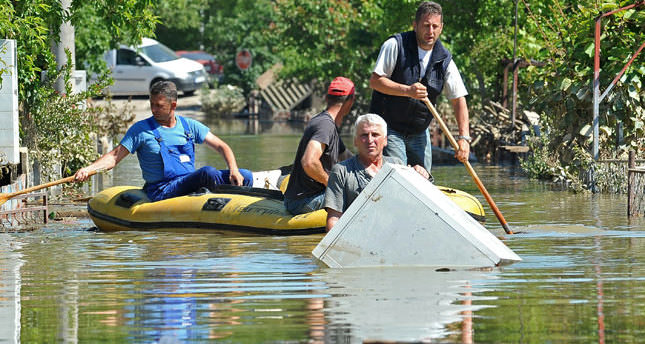 In response to flooding in Bosnia, Serbia and Croatia that has worsened with every passing day, the Prime Ministry launched an aid campaign for the victims

The aid notice signed by Prime Minister Recep Tayyip Erdoğan has been published in the Official Gazette. The notice states that hundreds of thousands of people are encountering problems related to security, hunger, water shortages, a lack of shelter and diseases in the West Balkans. "We feel the urge, as the human duty, to provide humanitarian aid promptly and quickly for the victim countries in need," the notice wrote.

Deputy Prime Minister Beşir Atalay said, "The AFAD sent its teams to the two affected countries. Bosna-Herzegovina also requested a total of 100,000 sandbags on Sunday evening." Atalay went on to say that 125,000 sand bags were sent with generators and drainage pumps. Apart from these, 1,000 blankets, cleaning materials and boots were sent. "Turkey also offered financial assistance to Bosna-Herzegovina and Serbia,"
Atalay pointed.

In the flood disaster many settlements submerged and houses were destroyed due to landslides. Authorities announced that efforts are ongoing in cities in Bosnia Herzegovinai including Br?ko, Biyelyina, Doboj, Maglaj and Zavidovici. Civil defense and municipality employees as well as volunteers are trying to deplete the flood sedimentation while military troops and humanitarian relief organizations are working to supply food and drinking water to people. Humanitarian aid materials are supplied to citizens in regions with blocked roads. Apart from that ill, women and children are brought to centers built in crisis centers. Towns like Maglaj, Zavidovici, Jelyezno Polye, Topcic Polye and Doboj that are stricken by flooding due to the overflow of the Bosnia River have become a mud lake. Citizens living in cities where bridges collapsed, roads caved in and trees fell down, are trying to clean the houses and roads sunk in mud. The lack of water and electricity in those cities makes the life even harder.

The U.N. announced that it has sent a team comprised of disaster evaluation experts due to the flood in Bosnia-Herzegovina, Serbia and Croatia.

U.N. Emergent Humanitarian Aid Coordinator Valeri Amos said she is deeply sorry due to the disaster. Amos noted she is worried about the possibility of more rain in the area, and the U.N. and other humanitarian aid organizations offered to help the countries affected by the flood.

After a meeting with the Bosniak member of the Presidency of Bosnia and Herzegovina, Bakir Izetbegovic, Croat Member of the Presidency, Zeljko Komsic and Serbian member Nebojsa Radmanovic at the presidency building in the Bosnian capital, Sarajevo,
Rasmussen said, "We stand ready to help in any way we can if requested…Your security, your stability and your future matter to us."

Rasmussen also highlighted concerns over mines in Bosnia which were displaced by flooding. He said they could pose a real threat to local populations and therefore should be dealt with in an effective manner.

By the way, a mine that moved because of the biggest flood of the last 120 years exploded on Wednesday. In the accident which happened in Brcko city in the Northern Bosnia, no one died or got injured. It is estimated that nearly 220,000 mines were laid in 13,000 various areas during the war in Bosnia-Herzegovina between 1992 and 1995.

Four percent of the land in Bosnia Herzegovina is covered with mines. Some 1,630 settlements where about 960,000 people live are still laid with mines. It is believed that Bosnia Herzegovina will allocate a budget of 40 million euros (TL 113.8 million) to clear the minefields until 2019. However, as there are no sufficient sources, most of those fields are still not clear. Since the end of the war, nearly 600 people died and 1,700 people were injured in Bosnia Herzegovina due to mines. One-fourth of the population faces the danger of mines every day.
RELATED TOPICS