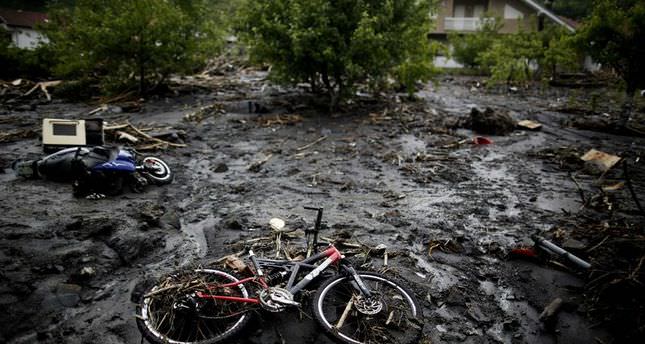 by AA Jun 19, 2014 12:00 am
The Balkans' worst flooding in decades will cost Bosnia and Herzegovina around two billion euros in damages, the country's foreign minister Zlatko Lagumdzija said on Thursday.

The figure is equal to 16 percent of the country's gross domestic product, said Lagumdzija, adding that one-fifth of Bosnian territory was damaged and thousands of people were forced to flee their homes because of the disaster.

The European Union, United Nations and World Bank have finalized their report to determine the cost of the disaster for Bosnia and Lagumdzija said regeneration in the area would begin soon.

"The report covers energy, infrastructure, health, education, agriculture, livestock, fisheries, forests, water, production, trade and employment areas," Lagumdzija said. Noting that further information on the cost will be revealed soon, Lagumdzija observed that the cost of the three-day flood is greater than the government four-year budget.

A report on how the floods affected neighboring Serbia is expected within weeks.

At least 76 people died last month in the worst floods to hit the region in 120 years. Slovenian Prime Minister Alenka Bratusek said she believed a forthcoming aid conference in Brussels would raise necessary fund and materials. "We want the Bosnian and Serbian people get back to their normal life," she said. "First we need to repair damaged houses for people to get back their homes."