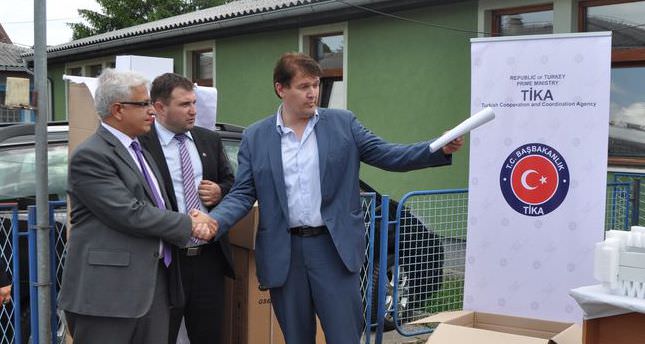 by Jun 23, 2014 12:00 am
Deputy Prime Minister Emrullah İşler will be in Bosnia on Monday to attend the opening ceremony of Goražde Canton Hospital built by the Turkish Cooperation and Coordination Agency (TİKA) and is expected to meet with Emir Frasto, the premier of Goražde.

The opening ceremony will be attended by numerous figures including Nermin Nikšić, the Prime Minister of the Federation of Bosnia and Herzegovina, Ali Maskan who is the Deputy President of TİKA as well as deputies from the Turkish Grand National Assembly (TBMM) including Hasan Karal from the AK Party, Mehmet Volkan Canalioğlu from the Republican People's Party and Reşat Doğru from the Nationalist Movement Party.

Emrullah İşler is expected to visit Fatih Sultan Mehmet Cultural and Educational Center built with financial assistance from Ankara's Keçiören and Gaziantep's Şahinbey municipalities under the coordination of TİKA. He will then visit capital Sarajevo and will meet with Bakir Izetbegović, the Bosniak member of the Presidency of Bosnia and Herzegovina.

TİKA is actively involved in the construction of numerous public works projects in Bosnia. It has delivered humanitarian aid supplies to many people who have been hit by the recent flood disaster in Bosnia. Last week the Fatih Sultan Mehmet Cultural and Educational Center was opened here along with a park right next to it, while TİKA is also involved in the construction of a cultural center and numerous other projects in cooperation with municipalities and other organizations and its works in the country are praised and celebrated by the Bosnian people. For instance, TİKA has provided the necessary tools and supplies to the Capacity Development Project of Una Sana Canton's Agricultural Institute's Laboratories which is expected to analyze the plants and trees throughout Bosnia Herzegovina following the flood disaster, a project that is expected to directly contribute to the country's economy.
Last Update: Jun 23, 2014 12:48 pm
RELATED TOPICS