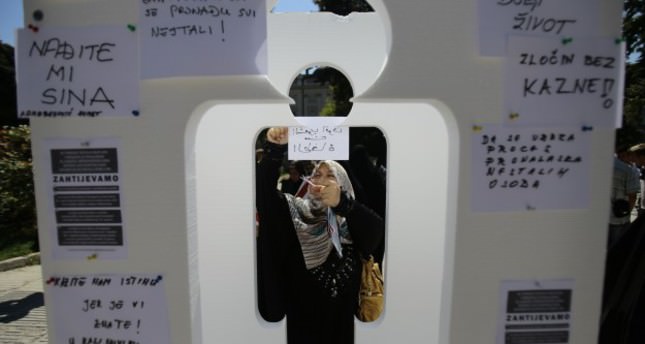 by AA Aug 31, 2014 12:00 am
The International Day of the Disappeared was observed Saturday with a ceremony in the Bosnian capital of Sarajevo.

Families of the people who faced forced disappearances during the Bosnian war between 1992 and 1995 participated in the ceremony.

Families from Iraq also took part in the event in which members of the Iraqi "Ship of Life" association carried photos of people who left their homes in Iraq.

Ado Pervan from Bosnian "The Realities of Kalinovik 92" association told journalists that he lost 16 members of his family during the Bosnian war.

"I lost 16 members of my family, with six of them still missing. I and other relatives of missing people are appealing to officials to increase searching efforts for missing people," said Pervan.

Safa Muslim from "Ship of Life" association said the reason they came to Sarajevo was to learn from Bosnian associations' experience in their bid to search for the disappeared.

"We support the families of missing people and we want to gain benefit from their experiences," Muslim said.