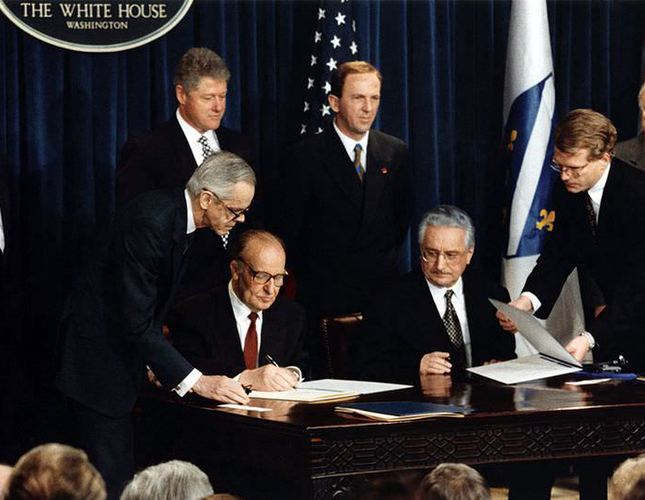 by AA
Nov 23, 2014 12:00 am
Nineteen years on since the Dayton Peace Agreement successfully ended the war in Bosnia and Herzegovina, the state structure of the country remains fragmented, university professors and students say.

The General Framework Agreement for Peace, known as The Dayton Peace Agreement, ended the four-year war in Bosnia on Nov. 21, 1995, after three weeks of negotiations by the then Serbian President Slobodan Milosevic, Bosnia and Herzegovina President Alija Izetbegovic and President of Croatia Franjo Tudjman.

Professors and students from the University of Sarajevo say that even though the peace agreement is considered crucial for ending the war in Bosnia, it has created a fragmented state structure in the country.

This fragmented structure is one of the biggest factors blocking the country's development and progress toward accession into the EU, they added.

Experts say the complex state system makes it difficult for the three ethnic groups in the country to agree on necessary European reforms.

University of Sarajevo Professor Mirsad Karic said the aim of the Dayton Peace Agreement was not to create a functional state to begin with.

"The main objective of the accords was to end the war. Its goal was not to create a functional state. This agreement was designed to act as a transitional phase," Karic said.

The professor said the agreement was meant only to be a short transitional period until only one constitution could allow for normal developments in Bosnia and Herzegovina.

"However, that never happened. Some also wanted to make changes to the existing constitution, but could never reach an agreement on proposals," he said.

The professor said the current system has been preventing Bosnia's EU membership process.

He added that there could not be major changes in Bosnia's constitution without the influence of the U.S. and the international community.

Fahira Vroda, a third-year law student at the University of Sarajevo, said her teachers talked only about the consequences of the Dayton agreement.

Vroda believed Bosnia and Herzegovina lacked a central government which could make vital decisions in the country.

"We rarely think about how to overcome the situation after the Dayton agreement. The accord was supposed to be a temporary act to stop the violence and bring stability to the region.

Unfortunately, we lost too much time to make concrete steps to change this," she said.

"I think there are still people who believe there is no need for this country. As long as people believe that, we cannot progress," the student added.

The Dayton Peace Agreement was initiated on Nov. 21, 1995, at the Wright-Patterson Air Force Base near Dayton, Ohio, U.S.