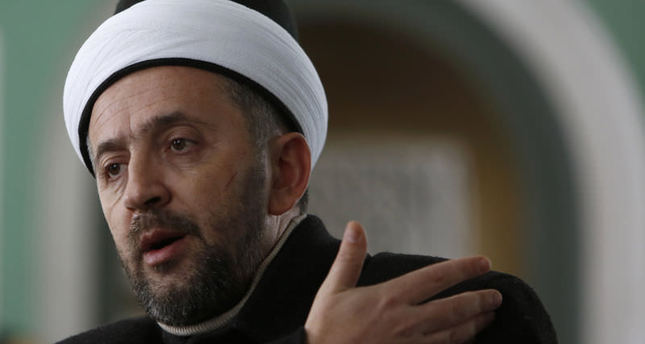 Bosnia, which witnessed a deadly war and genocide in the 1990s, now suffers from Salafi movements that spread to the country afterward, backed by foreign governments and attacks on traditionally-rooted Muslims

The Associated Press on Tuesday reported that a Bosnian imam, Selvedin Beganovic, was attacked in Trnovi by a long-bearded man who burst into the mosque's courtyard and pinned him down. Shouting, "Now I will slaughter you!" he stabbed Beganovic in the chest three times and fled.

This was not a random attack, as Beganovic has been the victim of seven assaults blamed on Salafis in the past year, with three just last month. Salafis were reportedly attacking him because he told people who come to the mosque that the war in Syria is not theirs; their war is to fight unemployment and poverty.

"That is not our war," he told the AP in his small northwestern town. "Our jihad in Bosnia is the fight against unemployment and for the care for our parents who have small pensions. The care for the socially jeopardized," he said. "When did Muhammad ever behead anyone?" he said. "When did he take a knife and slaughter an innocent journalist?"

Of Islam's 99 names for God, including "the Mighty" and "the Avenger," the ones Beganovic likes most are "the Exceedingly Merciful" and "the Exceedingly Gracious." "That is what we teach our children here," he said. Husein Kavazovic agreed with Beganovic and said: "Our job is to keep repeating, to keep warning that this is evil and cannot be justified. [Salafis] are dangerous people. Their place is in a mental institution."

Dozens of Bosnians recruited by Salafi centers in Bosnia have reportedly joined the war in Syria, and some of them have returned to the country. The man who attacked Beganovic had fought in Syria, according to Dragan Lukac, the director of the federal police. "Every person who comes back from that front line is a danger," he said, "These people are able to perform attacks on citizens, on property, on state institutions."

Mansoor Islamovic, a member of a Sufi order in Bosnia, told Daily Sabah, "The Salafis frequently attack our zawiyahs [places for Sufis to gather] and mosques. They have set many of them on fire. The world is blind to the growing threat in our country." Ahmad Aslani, an Albanian Sufi, also underlined the growing threat and said: "In Albania we face similar problems and traditional, ordinary Muslims suffer from the Salafis' pressure on them to 'convert' to Islam. Can you believe that? They invite us to become Muslim."

The strict and ultra-conservative interpretation of the Quran and Islam, which is typical of Salafism and Wahhabism that is practically the official interpretation in Saudi Arabia, is not rooted in Bosnia's traditional practices of Islam. The majority of Bosnian Muslims are Sunnis of the Hanafi school, which is regarded as progressive and open since it gives an important role to "reason" in practicing religion.

Sufism, which aims to show a way for Muslims to progress their spiritual abilities through love and tolerance to all, is ubiquitous in the country, and there are dozens of Sufi orders that embrace humanity. Under Ottoman rule, Bosnians lived with Sephardic Jews and Orthodox Christians in peace with few exceptions.

However, the war at the beginning of the 1990s changed the understanding of Islam for some in the country and paved the way for Salafi groups who came to Bosnia to wage "jihad" against the infidels with the support of some foreign governments – allegedly Saudi Arabia. It is estimated that a total of 2,000 fighters came to Bosnia.

Some Bosnians who were motivated to destroy the enemy began the process of "Salafization" and radicalization. After the General Framework Agreement for Peace in Bosnia and Herzegovina, also known as the Dayton Agreement, which was signed in the winter of 1995, and after the Cold War had ended, some radicals stayed in the country and obtained Bosnian passports.

They started establishing their own mosques and foundations to recruit young people, which has led to a cultural change in society, as religion is much more present in everyday life. The clothing style of women has changed as Salafis see traditional clothing as wrong and incompatible with Islam.

"Salaf" as a word means "predecessor" or "ancestor," and as an Islamic term, means "those who lived either in the era of Prophet Mohammad or immediately after his death or in the third generation." Terminologically, those who say that the Quran and the sayings of the Prophet are the only ultimate valid sources of Islam and that to follow as-Salaf as-Saleh – the pious forefathers, i.e., the companions of the Prophet, are called Salafists.

Salafist doctrine is basically anchored in two principles. First is "al-wala" which means "love, support, help or follow," in the sense that Muslims take the prophet and his companions as examples of how to live. Second is the term "al-bara," which means to purify Islam by excluding the "bidah" – innovation, novelty, heretical doctrine, heresy – and "khurafa" – superstition.

The main ideas of Salafism generated the idea that the type of Islam in Bosnia, including Sufism, is full of mistakes and must be corrected, according to Salafists. Salafi groups claim on their webpages and YouTube videos that Bosnians have been dragged into an incorrect understanding of Islam and must be taught what "true" Islam is.

As Salafi groups are backed by powerful governments, the Bosnian government cannot prevent their activities, but passed a bill that makes it illegal to participate in or recruit others for war abroad.